Kanye West is having a hard time right now. He was admitted to the UCLA Medical Center on Nov. 21 for exhaustion and sleep deprivation, and reports claim the Chi-town rapper was encouraged to check himself in after alleged erratic behavior at his personal trainer’s home. Unidentified sources reportedly revealed that November is a hard time for the 39-year-old father of two due to the November 10, 2007 passing of his mother. Words like “spiritual attack” and “depression” have been tossed around by everyone but health professionals. Yesterday, West was released from the hospital where he is said to be resting. It’s all been a shitshow of speculation. But in the midst of it all is his doting wife, Kim Kardashian.

Kardashian is still dealing with her own struggles from being robbed at gunpoint in Paris in October. Still, the day her husband of two years was admitted to the hospital, she skipped a gala honoring her late father and immediately flew back to L.A. That was the beginning of the media’s narrative that Kardashian is somehow a “superwoman” for never leaving her husband’s side, as if that’s not generally what any wife would do.

In what reads like Kris Jenner-orchestrated propaganda (I know a press release when I see one), TMZ outlines what Kardashian’s day-to-day looks like since West has been in the hospital. 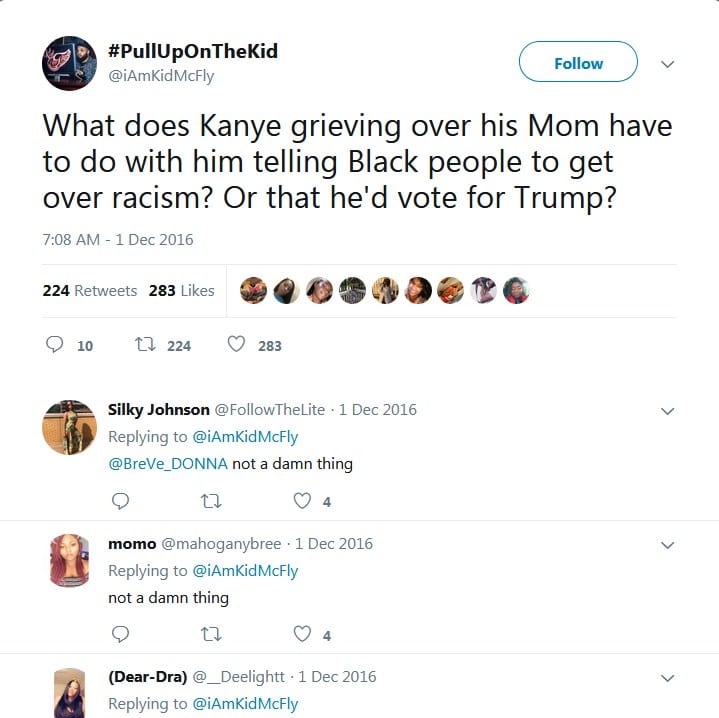 What does Kanye grieving over his Mom have to do with him telling Black people to get over racism? Or that he’d vote for Trump?

“Kim Kardashian is now charged with Superwoman tasks, which include putting her own emotional upset on hold, caring for her kids and giving a husband in crisis vital emotional support,” TMZ writes. Jenner can’t possibly think we don’t know she feeds the press stories that skew in favor towards her daughters. But anyway, here’s the reality star’s alleged day, according to TMZ:

EARLY MORNING
Wake up her 11-month-old and 3-year-old and give them uninterrupted attention as she feeds, clothes and nurtures them. She organizes their day by getting them off to various appointments and activities.

LATE MORNING AND AFTERNOON
Kim beelines it for UCLA Medical Center where her attention becomes singular … providing emotional and various other forms of support for Kanye. Kim comforts him, deals with a slew of doctors, nurses and other health care professionals, makes medical decisions and, just as important, tries to cheer Kanye up.

LATE AFTERNOON AND EARLY EVENING
Kim books it back home where she’s there before the kids get home. She feeds them, spends time with them and tucks them into bed.

LATE EVENING
We’re told she often then goes back to the hospital to spend more time with Kanye.

People close to the family tell us she hasn’t cracked at all … she’s upbeat and strong with everyone, even in the face of a pretty crappy situation.

Maybe it’s just my non-Calabasas upbringing, but nothing here seems out of the ordinary. Are we really pulling out the pompoms because a mother wakes up her children and then feeds them? Because she shuffles them off to various activities before heading to the hospital to do what any supportive spouse would? Then gets home in time to spend more time with the kids before going back to the hospital? This is superwoman worthy? It’s shocking she hasn’t “cracked at all.” Come on, now.

Sure, women don’t get a fair shake when it comes to household chores or the pressures of being a “good” wife. Kardashian is probably not exempt from that. But she’s Kim Kardashian. Everything she did while her hubby was hospitalized for over a week is what millions of women have been doing for centuries. The difference is most of them are doing it while poor or middle class, without a full staff, without nannies, without the luxury of being able to halt all work responsibilities. 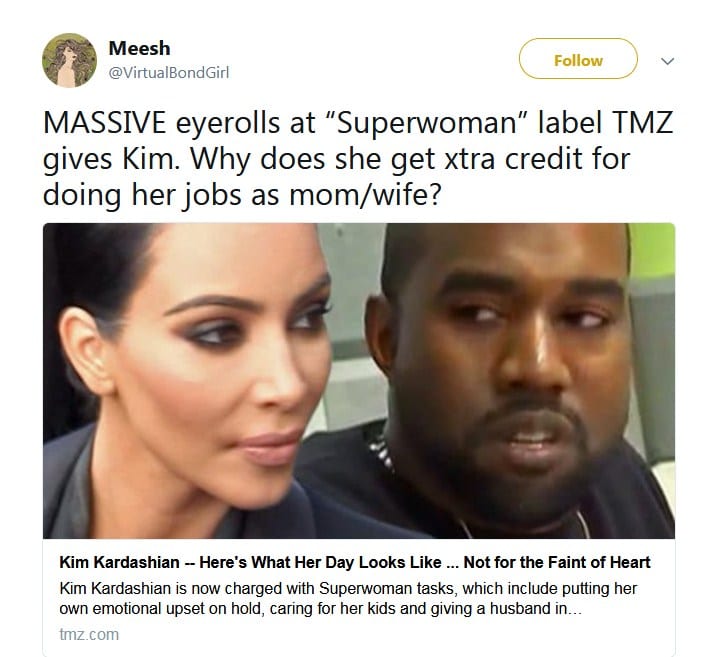 MASSIVE eyerolls at “Superwoman” label TMZ gives Kim. Why does she get xtra credit for doing her jobs as mom/wife? https://t.co/eTiPIqshcE

My single mother did way more than this — minus the hospitalized husband — and still had to work. Our closest family member was nearly three hours away. There was no chef, or drivers, or staff. Just a woman doing what she had to do. I don’t think she’s interested in being deemed a superwoman either. Think of all the mothers who have to do this with no help, sickly elderly parents, and no adequate resources to assist. It makes what Kardashian is reportedly doing look like a walk in the park.

Sorry, but Kardashian is not a superwoman. Her never leaving Ye’s side isn’t newsworthy. Unfortunately, many people can’t sit at the hospital with their husbands all day because they still have to work. None of this is extraordinary. The selfie queen doesn’t need the applause for doing normal things (and in her defense, she’s not asking for it).

Why did Angelina Jolie file for divorce from Brad Pitt? A few theories, if you will

Jessica Simpson Cannot Be That Good In Bed

Best Back Exercises for Women 2022

The Kardashian Children – Age, Names, and Their...

Things You Did Not Know About The Superwoman...