How Luanne Smith Is Encouraging People to Talk about Their “Unmentionables”

“Each subject that is taboo and hasn’t been discussed or has been considered vulgar or awful or unnatural, all those subjects relate to many people who share them, but they have no outlet. So, immediately you will have a readership.” — Joyce Carol Oates

Inspired by Oates’ words and her MasterClass about the art of telling a short story, Luanne Smith — along with co-editors, Kerry Neville and Devi Laskar — decided to jump off the deep end and explore the consequences of breaking social norms, or taboos. While venturing into creating an understanding of the topic, the trio quickly realized the depth and magnitude of taboo diversity, including the many forms it can take physically, mentally, and emotionally. That’s when they knew they had unlocked an idea for an anthology.

Taboos & Transgressions: Stories of Wrongdoings is the second title in a three-book anthology revealing the taboo stories Smith and company were after. Not only is the book composed of stories from well-known writers — such as Bonnie Jo Campbell, Pam Houston, J.C. Sasser, and more — but they decided to hold an open call for stories. After receiving well over 200 submissions, the team dwindled down the selection to 24 of the best taboo gems that highlighted the facets of our human experiences.

Whether it’s heavy hitting topics, like murder, or light-hearted jokes, such as Kim Addonizio once asking her friend Dawn why she was named after a dish detergent, this anthology covers it all. The stories and essays range from nitty-gritty realism to surreal encounters and experimental adventures. Including moments of empowerment, the variety of experiences shared can connect to readers from every walk of life. 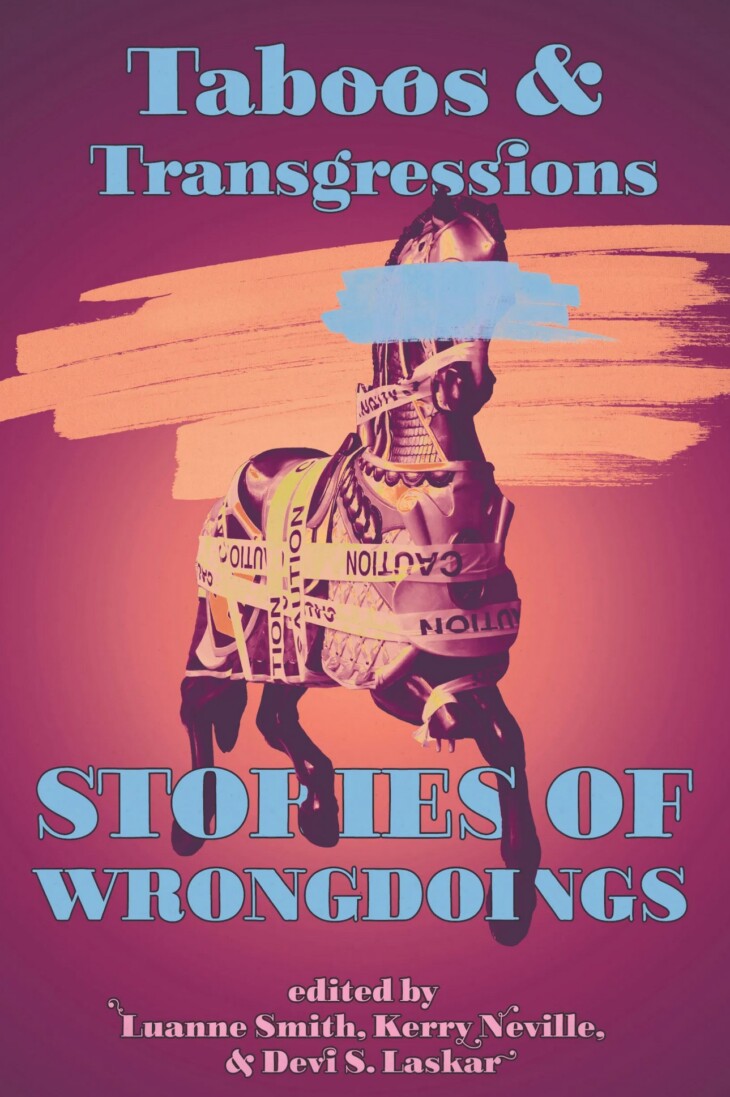 “Breaking taboos is a very human thing to do and a very inviting concept to most of us,” Luanne Smith recognizes. “But there are always consequences. We wanted to examine these rule breakers within this book and what happens to them, good or bad.”

While taboos may be uncomfortable to think about, Taboos & Transgressions: Stories of Wrongdoings may bring a warm, familiar feeling to the reader. Although covering off-hand topics, there’s an overwhelming narrative of “We’ve all been here, so why not talk about it?” Creating conversations that include rarely mentioned subjects gives the power back to those finding themselves trapped in experiences without knowing how to talk about what happened, expanding readers’ self awareness and encouraging healing.

According to decision science specialist and University of Washington faculty member Dr. Nika Kabiri, “The urge to test norms, or even violate them, is not uncommon, even when it’s not the most rational choice. By pushing social boundaries, we understand them better, know what they’re there for, and know why they should (or shouldn’t) constrain our decisions.”

Social stigmas have influenced all eras of time, shifting alongside the collective conscious and our reigning morals in ways that usually benefit the top of the social hierarchy. However, our ability to decide what we believe is in our best interest ties in free will by how we choose to take action and respond to internal and external influences. Through this anthology, these ideas surrounding wrongdoings and their varying consequences are explored with new perspectives and the implications behind being judgmental of others for doing what we want permission to do in our own life. 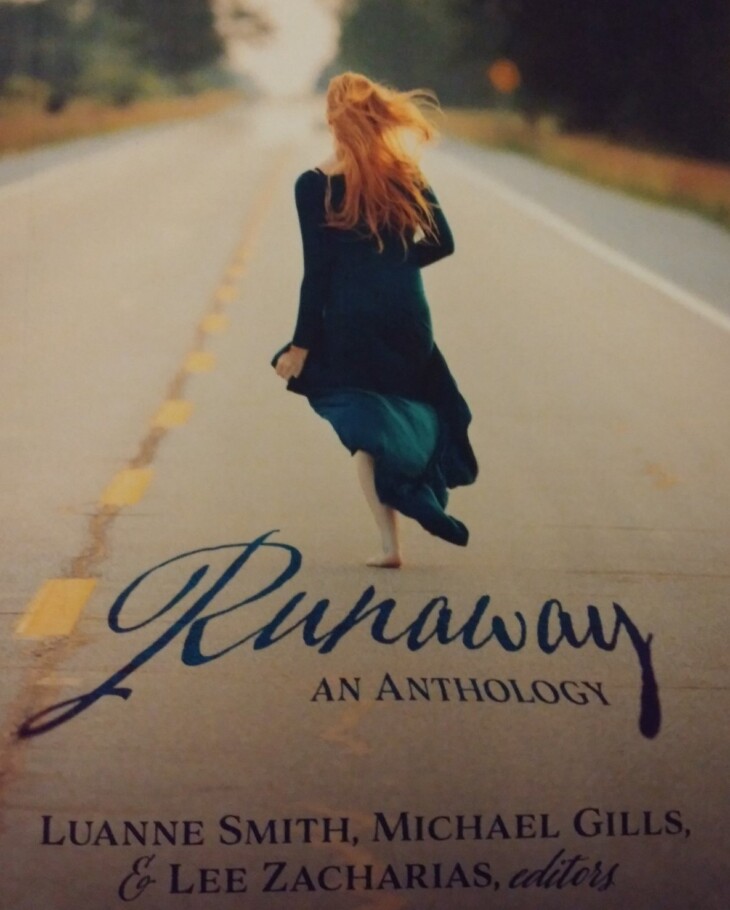 Luanne Smith’s established background in creative writing and film lends a hand to creating such a welcoming environment surrounding these difficult, left-field topics. She holds a bachelor’s degree from the University of Kentucky in English Education, an MA in English from Murray State University, and an MFA in fiction writing from Penn State. After, she taught for 30 years at West Chester University while publishing short fiction and poetry in literary journals.

Smith continues to improve standards for increasing representation and changing attitudes surrounding women creatives. Introducing panels at the Associated Writers & Writing Programs (AWP) conference, she expanded the conversation to encompass how women writers are being perceived in the industry and highlighting the lack of female voices, what they have to say, and why the reaction is so different to them as opposed to male writers.

Smith also presented panels on the double-standard women writers encounter compared to men when writing sexual content. Incorporating the female point of view in a formerly male oriented gaze made it difficult to talk about topics without expecting backlash. Lacking perspective in the larger conversation without female voices, giving everyone a platform to contribute opens up the dialogue to explore the expectations and constraints of society.

As she hosted the well-received AWP Conference panels focusing on women writers and the challenges they face writing gritty material and bad-ass female characters, this second title may come as no surprise to some. With a majority of the submission pile coming from female authors, Smith and co-editors have created a space to acknowledge all voices and for all kinds of important stories to be shared.

Previously, Luanne co-edited the anthology, Runaway, for Madville Publishing and hopes to continue her anthology editing with a third title in the future, Muddy Backroads. All of the anthologies are tied together by playing with the idea of breaking away from the norms of society. When characters do so, confronting the consequences and delving into the emotional aspects to see what happens — and how our human reactions and responses builds up to a crux of the human experience.

As Luanne upholds the desire to “face the darkness,” she hopes to bring empowerment through a variety of nonfiction and fictional encounters. Exploring the dark side of human nature and behavior is something we all do, which is why Luanne decides to shed light on the secrets all of us may hold. By keeping parts of ourselves in the dark, we refuse to see our own wholeness and heal the pieces that need the most love.

“This is a gritty anthology, one that doesn’t pull punches and one that looks at choices made and our very human foibles and mistakes, large and small,” Luanne Smith says. “We hope you enjoy the stories of wrongdoing that follow.”

Hindsight is clearer than how we choose to look at things in the moment, but try taking a walk on the wild side. Might even find that we can see parts of our own experience in the tales of others, hopefully to bring us closer in confronting the choices we make that create the range of moments life has to offer. For more information about Luanne Smith and Taboos & Transgressions: Stories of Wrongdoings, please visit the website.

Which Type of Signal Does an Incremental Encoder Generate

5 Electrical Projects You Can Easily DIY