Meghan Markle’s style over the years

Meghan Markle was born as Rachel Meghan Markle, and before becoming the member of the royal family, she was a Hollywood actress most famous for her role as Rachel Zoe on television show Suits.

This picture was taken during Anti-Defamation League Awards Dinner in Los Angeles in 2011. She was married to Trevor Engelson at the time.

This is something we don’t get to see nowadays. Meghan wearing a beige miniskirt and ivory sleeveless shell with cut-out open-toed pumps On May 17, 2012, during the USA Network’s Upfront Presentation. Her hair is even in a different color.

Meghan in a midriff-bearing bandage dress designed by Herve Leger for Max Azria at a 2013 fashion show.

Another picture form 2013 at the New York City’s Fashion Week, before she mastered the famous royal leg-crossing pose.

At an event benefitting Elton John’s AIDS Foundation in October 2014, Meghan posed like many of the Hollywood actresses and models, but that pose isn’t something royals are known to do.

Meghan wore a low-plunging dress designed by Misha Nonoo at the Vogue Fashion Fund Awards in New York on November 2, 2015. Some say that Misha was the one who introduced Prince Harry and Meghan for their now famous blind date. Some say it was actually Violet von Westenholz.

Meghan wore shorts at the P.S. ARTS 25th Anniversary Party in Los Angeles in May 2016. Definitely not a royal look.

By the time Meghan was photographed here, she was already in the center of attention as Prince Harry’s new girlfriend.

Misha Nonoo designed this famous ‘’husband shirt’’ which Meghan wore with ripped jeans, and some say that it is a “piece of clothing that ‘sealed the deal’” with Prince Harry.

Just two days before proposing to Meghan, Prince Harry and Meghan were spotted at an AIDS Day Charity Fair in Nottingham, United Kingdom. The future Duchess of Sussex wore a tulip-skirt, long-sleeved sweater, and chunky boots.

This was Meghan’s first official engagement as the future Duchess of Sussex, the Commonwealth Day Service at Westminster Abbey. The coat was designed by Amanda Wakely, a British designer which Meghan wore with a beret.

During a visit to Edinburgh Castle in 2018, Meghan wore a tartan coat.

Upon visiting Nothern Ireland in March 2018, Meghan again wore a tulip skirt, but this time she wore a crew-neck sweater designed by Victoria Beckham.

Meghan wore an entire outfit designed by Ralph Lauren – a blue and white striped button down and wide-legged white pants. 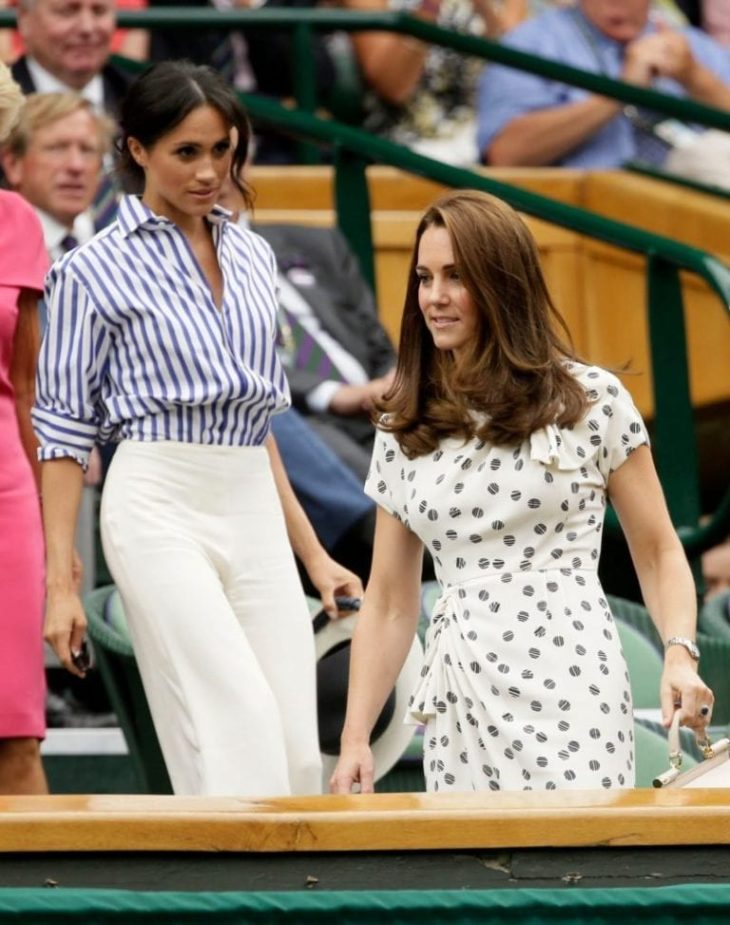 A different approach to tulip skirt

Meghan is apparently in love with a tulip skirt, which fits her beautifully. Here she wore a blue pleated and flared skirt during her first-trimester in October 2018.

While visiting Brinsworth House in Twickenham, London on December 18, Meghan Markle had a floral-print dress which showed her baby bump. She wore a coat by Soia & Kyo, a Canadian brand, and a handbag by Britain’s Wilbur & Gussie in addition to the dress.

Changes happening in the royal family in 2019

Style Guide: How To Style Your Meggings?