Ever since it was official that Meghan Markle and Prince Harry are dating, the former Suits star became even more popular. Now that she’s a member of the royal family, naturally, all eyes are on her all the time. Regardless of how much you may like her or not, one thing’s for sure – Meghan Markle is a sharp dresser. Thus, it comes as no surprise that many celebrities, including Ivanka Trump, are copying Meghan’s royal look. Take a look at the list of famous women who are trying to look like Meghan Markle. 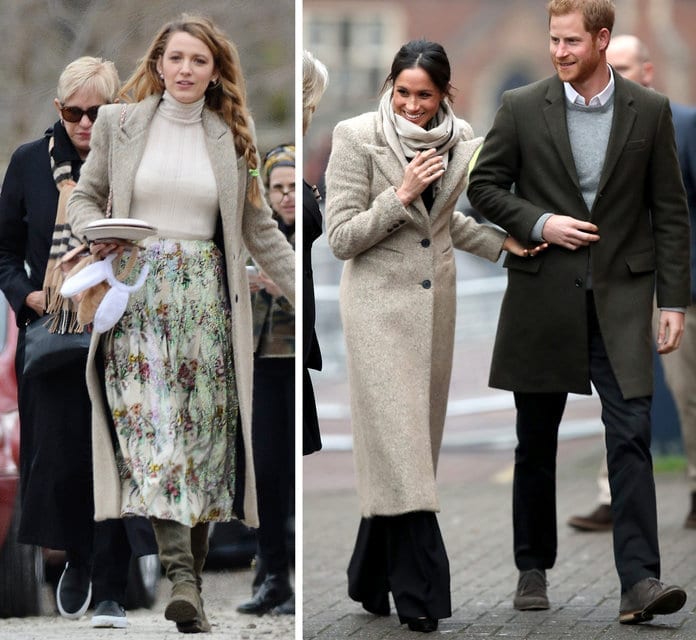 Since Blake Lively and Meghan Markle actually have quite different styles, we can’t help but think that it was Meghan who inspired Blake to wear a camel-colored Smythe coat. Since Meghan has a more ‘classic’ style unlike Blake’s high-end runaway fashion, the two wore the same coat completely differently. While Meghan matched it with a scarf of the same color and wore it over classic black trousers, Blake had a floral midi-skirt and ivory turtleneck. 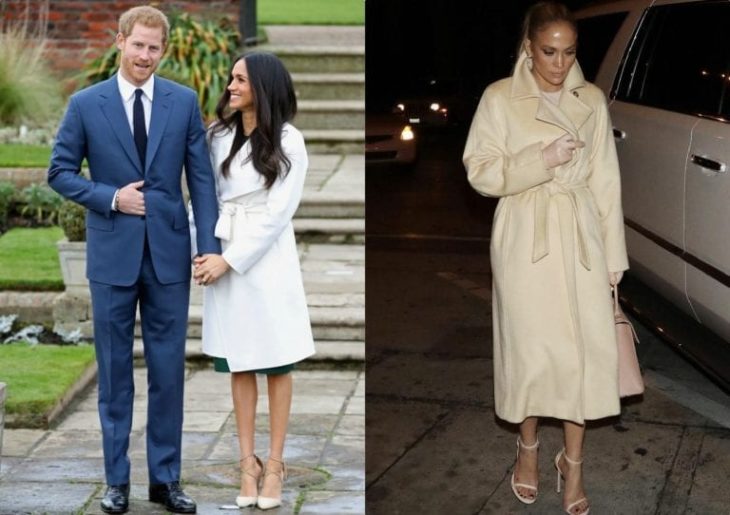 Jennifer Lopez also seems to like the way Meghan Markle dresses, so we could see her wearing the same Maxmara wrap coat. We’re not saying that J Lo actually needs anyone for inspiration, given that she alone is considered a fashion icon, but this classic piece of clothing was simply hard to resist, and we can’t blame her. 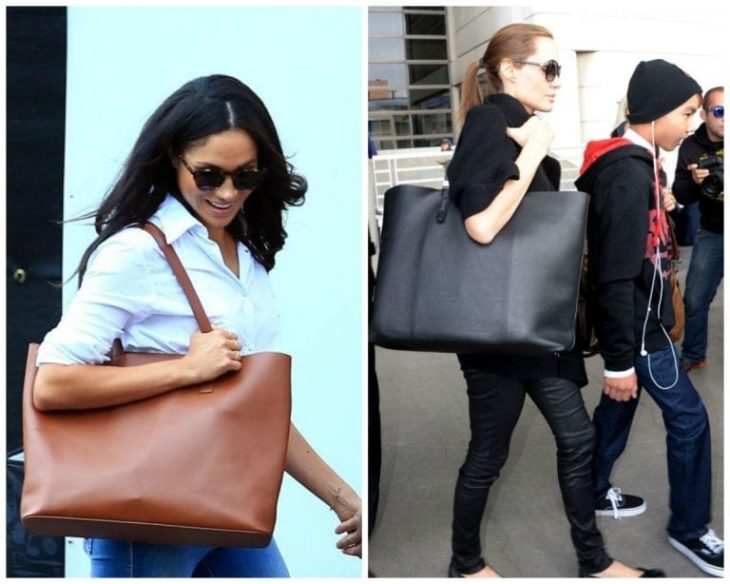 Unlike the previous two, it seems that Angelina Jolie and Meghan Markle share the same taste in bags, as both carried the same Everlane Petra Market tote, only in different colors. Markle carried a cognac-colored one when she made her 2017 Invictus Games appearance, while the famous actress was seen with the white one when she strutted through LAX. 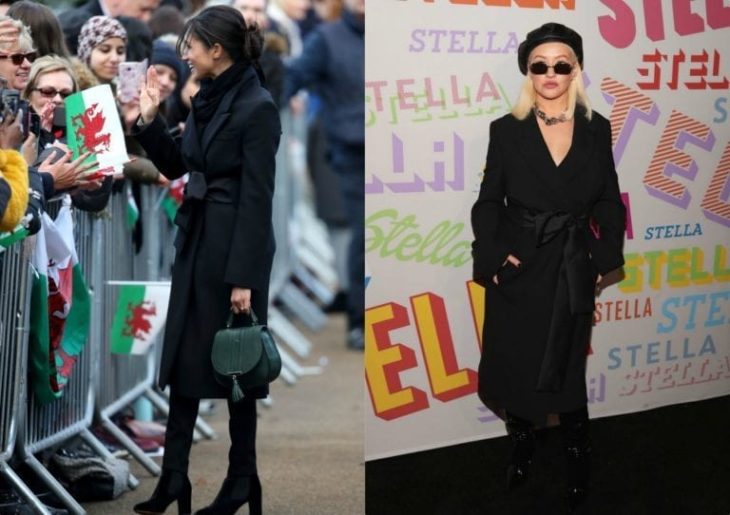 And now bac to coats – only this time, it’s a Stella McCartney coat. Christina Aguilera, however, styled it completely different than Markle did. While Meghan wore hers with black skinny jeans and boots when she appeared on a royal outing at Cardiff Castle in Wales, the signer went for a ‘90s vibe, matching the coat with a black beret and cool-girl sunglasses. And we have to admit that it looks great in both versions. 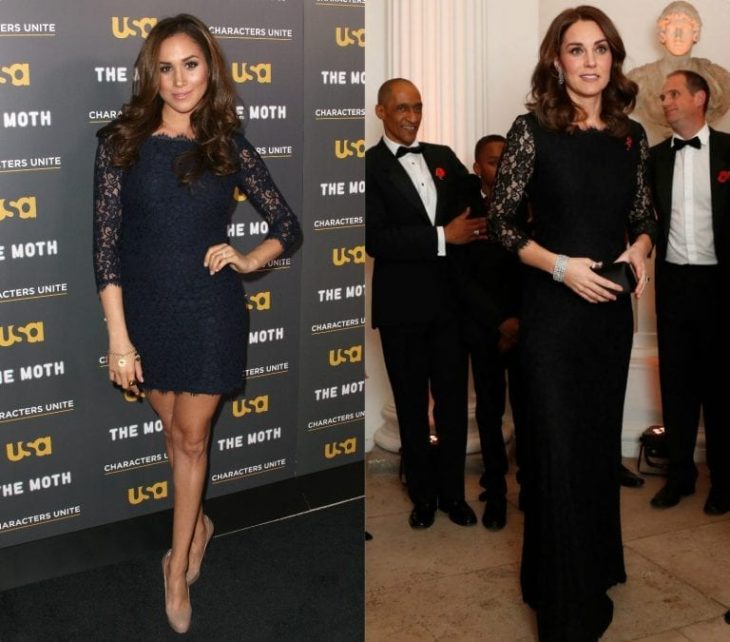 It’s interesting to note that even Kate Middleton once showed up in almost identical Diane von Furstenberg lace dress five years after Markle had worn it first. Namely, Meghan wore a short Diane von Furstenberg dress in 2012 for a USA Network event, before she even started dating Prince Harry. And then in 2017, Kate Middleton donned the same model, though in black and more royal-appropriate.

Ivanka Trump in the same black and white tiered gown 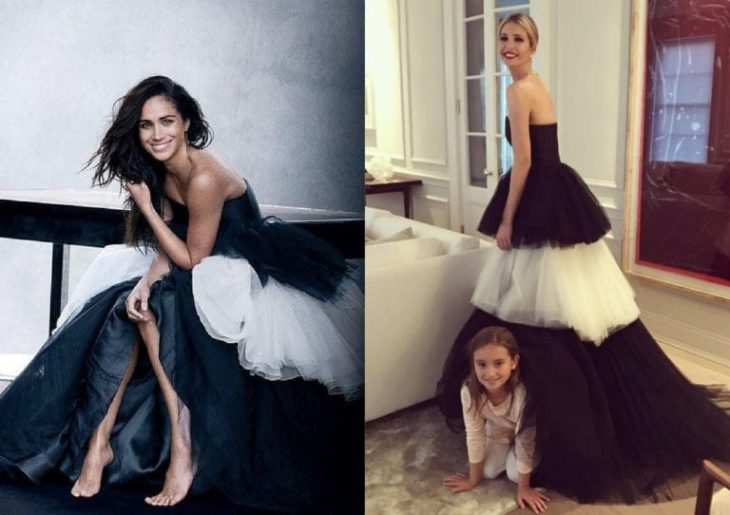 We guess you remember when Meghan Markle appeared on the cover of the Vanity Fair barefoot, wearing a black and white tiered Carolina Herrara gown. And recently, we’ve had a chance to see Ivanka Trump wearing the very same dress in a photo she posted on her Instagram. Some were speculating that she chose this dress in particular as some kind of ode to Markle, others said it could be in hope for a wedding invite, but we still think that she just couldn’t resist such a lovely dress. 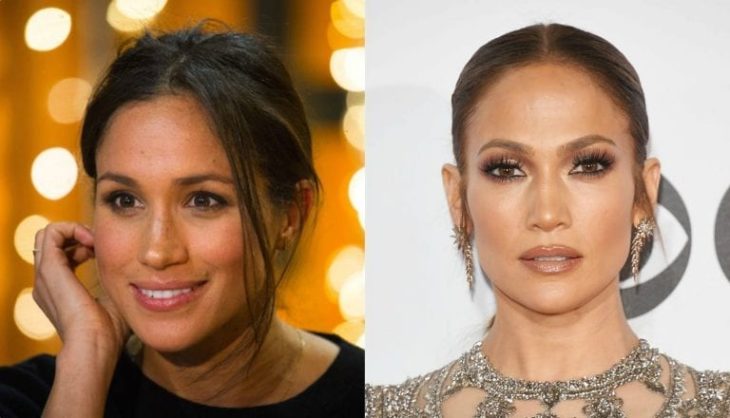 And we have J Lo once again, though this time it’s not Meghan’s clothes that she copied. It seems that, in addition to the style, she also fancies the same facial treatments. We’re talking about a rather rare treatment known as the Buccal Massage, which is not that invasive, while it gives excellent results. However, only a few aestheticians offer such facial treatment. The Buccal Massage requires 8-10 visits to achieve solid results.

As you can see, it seems that Meghan has not gained in popularity only among ordinary people around the world, but among celebrities, as well, given how many of them are trying to copy her style and royal look. Stay tuned for more news about Meghan and other members of the royal family, we’ll keep you updated.