Mind Of Man: When It Comes To Love, Chill Out

As I see it, there should be no discussion of a relationship, or exclusivity, within the first three months of dating. Those three months should be a drama and ultimatum-free zone. No jealousy or commitment. Just a period of savoring; the gritty, totally worth it hard work can come later. Save it, potentially, for the rest of your life.

If something works between two people, then there is no rush. That “click” will still be there in three months, and hopefully six, and a year, etc. And once you find that unlucky slob who will Eskimo kiss you when you’re sick, all you have to do in order to preserve your new found mutual attraction is to chill the f**k out, have faith, and not flinch. Let it happen.

What’s more important, your insecurity and ADD or being in a relationship with the person you’re currently hanging out with? Give into what is instead of what could or should be. Sometimes doing nothing is better than doing too much, or too little.

When, exactly, does a relationship go from hot, sticky hooking up and dating casually, to full on, ZOMG

<3’s 4 Eva, boyfriend-girlfriend action? Ideally, after thee months of gauzy, dopey bliss you wake up together one day in a tangle of limbs, and one of you says, “Are you banging anyone else?” The answer is “no,” the other asks the same question, and the answer is also “no.” There’s an awkward pause that turns into a silent, deadly serious giggle and then someone says, “Let’s institutionalize this s**t.” Then, WAFFLES! 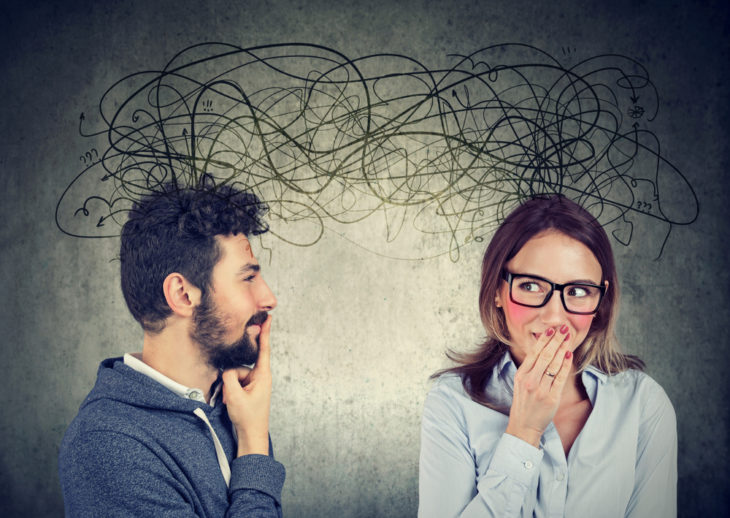 But we’re all too insecure and impatient to let things happen, to take a risk and gamble, because love is like any jackpot, it either happens or it doesn’t. If it were a mathematical equation, it would be Chemistry + Timing = Love. You go out on a date, cross your fingers, and if there’s a little bit of a current, like licking a battery, the date ends happily, you high-five yourself and proceed to repeat this minor victory all over again, as soon as possible, but not too soon because there’s no need to come off as desperate.

Then again, it might not work out. Maybe it’s because you pushed too hard, too quickly because that’s ADD for you, or were to eager to check “GET BOYFRIEND” off your long, ridiculous list of life goals, or your insecurities took over and turned you into a slobbering nag goblin. Or maybe he just vanished, and pushed you away because he’s convinced that at any moment, Jessica Alba was going to deliver potato skins and coo, “Yours is the beer belly I’ve been dreaming about all my life.”

I have two friends who are currently experiencing this dilemma. One is a chick, and one is a dude. It is a testament to gender equality than more and more, men and women are being douche-tools in exactly the same way. Women are becoming more commitment phobic, finding security in the cheap validation of sexual conquest, and men are becoming more emotionally needy, burying their snouts in pints of Haagen Daaz while manically checking to see if she texted back.

Both of my friends are a few chapters into what they both hope is a big, throbbing heart of a romance novel that ends with both of them old, in rocking chairs, telling dirty jokes and reminiscing about that time, in the club, when he had to quickly stuff her panties into his pocket. They both deserve this, in my view. She was dumped by a prince who, when kissed enough times, turned into a nasty little troll prone to ironic beer bong and flashing the double-guns. He was dumped by a bossy Bob Villa in a dress who saw him as an endless fixer upper, a man comprised of nothing but flaws who didn’t need to be saved, but rebuilt.

They had their sloppy, make-out rebounds, their hopeless lonely nights; euphoric “free at last!” moments, followed by more hopeless lonely nights. She, improbably, met him online, apparently finding the one single male who isn’t a married Lothario way past his prime with a cellphone full of pictures of his junk. He drank a second beer, and, improbably, strolled over to her at a party and was confidant, openhearted, and attentive. Good job, y’all.

They’ve had the hours long phone calls, the belly laughing in public over an instantly conceived inside joke, that shockingly vulnerable, time-stopping moment two people realize they do, indeed, fit. But now, the dilemma. When are they both girlfriend and boyfriend, and vice versa? I’ll tell you when. Whenever the hell it happens, it happens. Chill out. Think of the next three months as a stress-free, Zen-like cocoon where you both close your eyes, and inhale each others’ intoxicating molecules.

What’s more important, your insecurity and ADD or being in a relationship with the person you’re currently hanging out with? Give into what is instead of what could or should be. Sometimes doing nothing is better than doing too much, or too little.

I’ve said before in this column that sometimes, where love is concerned, there are no rules. Sometimes the much vaunted dos and don’ts of relationship experts just don’t apply, because two people randomly crash like subatomic particles in a super-collider, exploded, and made pretty, glittering stardust. Love is more improvisation than calculation. If you’ve found instant, miraculous co-dependence with someone, then do it. Go with it. But would that love be diminished or the quality of the relationship be compromised if you took the first three months just to be sure?

The 10 Traits Of A Great Boyfriend