While driving on Route 72 toward Ship Bottom, David Buhan, 29, of Cedar Run, spotted a waterspout in the Atlantic Ocean. Ryan Ross, @rrossAPP

Videos of the flooding, local rain totals, road closures, the forecast and more in the story below

Thunderstorms bursting with rain and powerful enough to birth a waterspout passed over the Shore this morning, triggering flood warnings, washing out roads and generally making for a miserable start to the week.

As of 3:15 p.m., “emergency management reported ongoing flooding near the Monmouth and Ocean County border. Howell, Wall, Neptune, Lakewood and Brick Township were among the hardest hit towns where both radar and automated gauges indicate 5 to 8 inches of rain fell this morning. Extensive flooding, causing damage to homes along the Metedeconk River, was reported in Howell Township earlier this afternoon.,” reads the warning from the meteorologists stationed in Mount Holly.

A rain gauge in northern Brick registered 7.83 inches of rain, a total — accumulated over just seven hours on Monday — that beats any rainfall estimate on land from superstorm Sandy, according to NASA. 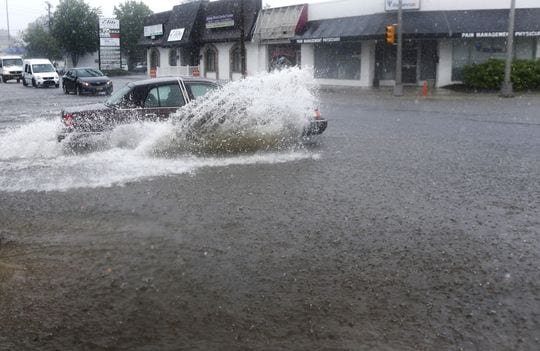 Police Chief James Riccio declared a state of emergency in Brick due to “extensive flooding” throughout the township, which has forced more than 100 evacuations in the age-restricted Greenbriar I Community. Police, the Office of Emergency Management and the American Red Cross are assisting displaced residents, according to a press release.

Howell also issued a state of emergency as officials warned residents to stay off flooded roads.

The mass of storms made for some truly incredible weather, and that goes beyond clouds capable of dropping a half foot of rain.

The sky above Long Beach Island appeared to be clearing up while David Buhan, 29, was driving into work on the Henderson Memorial Bridge just before 7 a.m.

He pulled out his phone to take a photo of the gray sky when a rare and impressive weather phenomenon entered the frame: a waterspout. You can see his video a the top of the page.

“The pictures don’t really show it, but water was flying all over,” he told the Asbury Park Press this morning. “You could see it getting picked up and it looked like circular waves around the spout.”

A few scenes from the soggy Shore this morning, including Brick, Keyport, Tinton Falls and Neptune can be found below.

A month’s worth of rain

A steady drizzle before dawn on the Shore turned into a deluge of rain starting at 7 a.m.

Howell had already logged 5.17 inches of rain by noon, according to totals gathered by Rutgers’ NJ Weather & Climate Network. That’s more than a typical rainfall total across the entire month of August and Howell achieved that in less than four hours this morning.

A flash flood warning expired at 3:30 p.m. but has been replaced by an areal flood warning until 9:15 p.m. for locations near the Metedeconk and Manasquan rivers, where the NWS predicts flooding “will continue into at least the early evening.”

Here’s a sampling of rain totals around the Shore, as of 3:30: 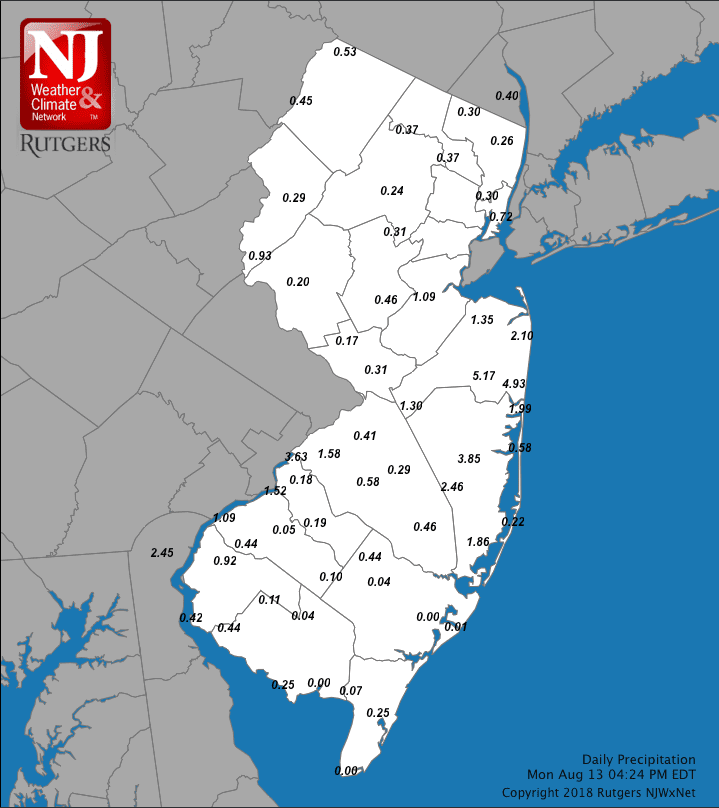 One of the many areas of heavy flooding in Brick was along Van Zile Road.

Township resident Kathy Matthews was among those who got stuck there Monday morning around 10:30.

She and her husband were on their way to pick up her parents from their physical therapy appointment, she said.

An hour later, they watched along the side of the road as their water-soaked vehicle was loaded onto a tow truck. They were bracing to hear that it’s a total loss.

“I couldn’t see with all the rain,” Kathy Matthews, 59. “The car in front of me went through, and I kind of got stuck, and then the water kept getting deeper and deeper.”

“We lived through Sandy. We didn’t get any rain like this. It was just four straight hours of nonstop rain,” said Boucher, 35.

Route 547 is closed between Oak Glen and Miller due to flooding. As updates become available, they will be posted on our Facebook page.

Flooding on NJ Route 3. Major standstill for 20 minutes and counting. This is the Clifton area. It’s really bad. pic.twitter.com/nKrJLwlBpV

EXTREME flash flooding grabs vehicles and sends them down the Peckman River…..crashing into the Rt. 46 bridge in Little Falls, NJ. That's the Chrysler Jeep dealer in the background. Flash #flood watch until 8 AM Sunday. Video via Miguel Galo. pic.twitter.com/oHV4okFNXA

During today's flash flooding in NYC, areas in & around NY Penn received an influx of water. As a result, NJT 7th Ave Concourse received substantial damage to the ceiling at the entrance to the concourse. Until further notice, the area is closed, as crews work to repair damages. pic.twitter.com/amrWboTC8W

Here’s a better edit of the flash flooding in Little Falls, NJ which washed away cars from a dealership @ABC7NY video courtesy: Miguel Galo pic.twitter.com/ocZxzzRlRR

FLASH FLOODING in Spring Lake, NJ! This road is underwater right now due to the very heavy rains. Be safe, turn around, and do not drive into this! #flashflooding #njwx @weatherchannel @breakingweather @nynjpaweather @AccuRayno pic.twitter.com/L4f1LRJj9Z

here was some route 80 flooding near Clifton NJ (feat. my dad) pic.twitter.com/lQfY42ziWG

Crazy flooding in Brick, NJ. In this retirement community there water rescues and doors left wide open during the evacuations. More at 5 @CBSNewYork pic.twitter.com/iIqZjaXp6C

Flooding in Brick NJ. 80 homes evacuated in an adult community, up to 8 feet of water in some areas update at 4 pm @ABC7NY pic.twitter.com/TJiLWHiHhZ

Almost 5” of rain in Little Falls NJ Saturday— so much it swept the foundation right out from under this home @StormTeam4NY @NBCNewYork #NBC4NY #flooding pic.twitter.com/SG1hTZ2kHO

Bumper cars in this NJ neighborhood. Flooding sent them into each other and washed away house foundations. Water would have been up to your neck if you were standing on the street. #flashflooding @PIX11News pic.twitter.com/ddMrQzpb9W

Some of the highest 12-hour rainfall amounts, 7-8 inches, are in eastern New Jersey. Radar estimates showed almost 5 INCHES PER HOUR near Lower Squankum, NJ just before 11AM! #flooding #njwx pic.twitter.com/rPZq8HakQw

What Do You Need Most to Live in...

When Should You Hire Criminal Defense Lawyers in...

Title IX – A Blessing or Curse for...