Not Okay: Naked Guy With Boner Attempts To Pick Up Women In Deeply Uncomfy YouTube Video

It used to be that pick-up artists (PUAs for short) would just use the power of supremely douchey words in their attempts to “woo” women. But, oh, how I long for the days of good ol’ fashioned negging now that PUAs have taken to straight up sexually harassing and/or physically touching their intended conquests and, on top of that, actually documenting their actions on YouTube. Remember the guy who was approaching women he didn’t know on the street and physically grabbing them, “sweeping them off their feet”? Sure, many of the women in that video laughed it off as a prank, but there must have been countless more women who didn’t appreciate being accosted by a strange man while being filmed.

But forget about him; there’s another extreme PUA on the up and up. Freddy Fairhair, a Norwegian YouTube personality, thought it would be really funny and cool and not creepy at all to approach women on the street completely naked. With a boner. 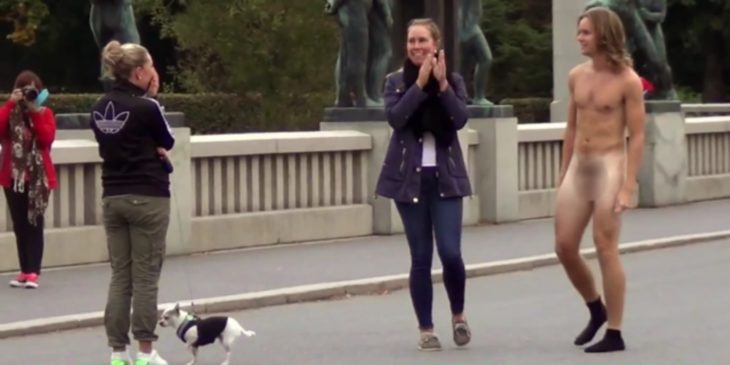 In the video — titled “Naked Guy Picking Up Girls,” in case you weren’t clear on his motivations — he approaches one woman and attempts to hug her. He tells another, “I’m having a boner,” which obviously leads to her instinctively looking down at his penis. Just as with the previous example of PUA sexual harassment videos, many of the women in Fairhair’s video laugh it off, but as the Daily Dot emphasizes, that does not make his naked invasion of their or other women’s personal space any less grotesque. Can this trend stop now, please? Who do I have to neg to make that happen?

17 Celebs Hanging Out With Their Stunt And/Or Body Doubles

Forever 21’s Batman And Catwoman Collection Has Me Conflicted

Guy Talk: How To Check Out Women