17 Celebs Hanging Out With Their Stunt And/Or Body Doubles

Quvenzhane Wallis has scored the part to end all parts — the lead in the movie remake of the musical “Annie”. But at only 10 years old, there are laws about how often she can work, so it makes sense that her stunt/body double for the movie would be an adult, who can work as often as necessary. Perhaps this elder doppelganger can play the role of everyone’s favorite orphan in the sequel, “Annie 2: All Grown Up” in which Annie takes over Daddy Warbucks’ business. Just a thought! 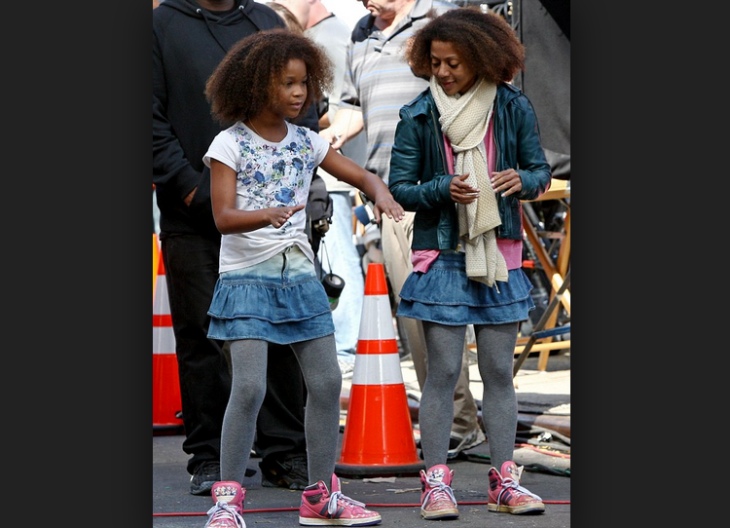 Channing Tatum And His Stunt Double 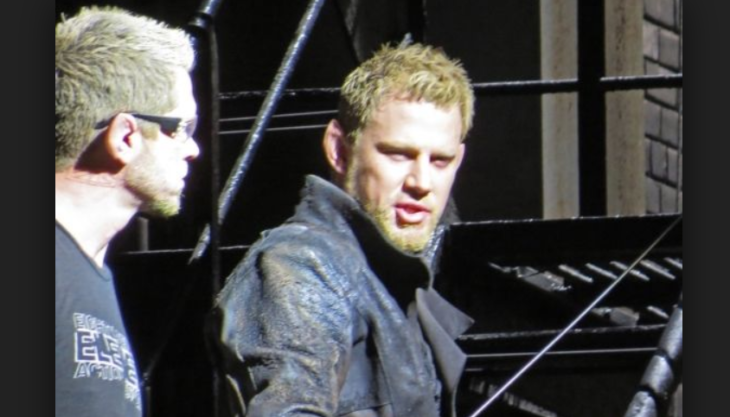 Ooof, neither Channing Tatum nor his stunt double are really pulling off the bleached blonde look on the set of “Chicago”.

Cameron Diaz And Her Stunt Double 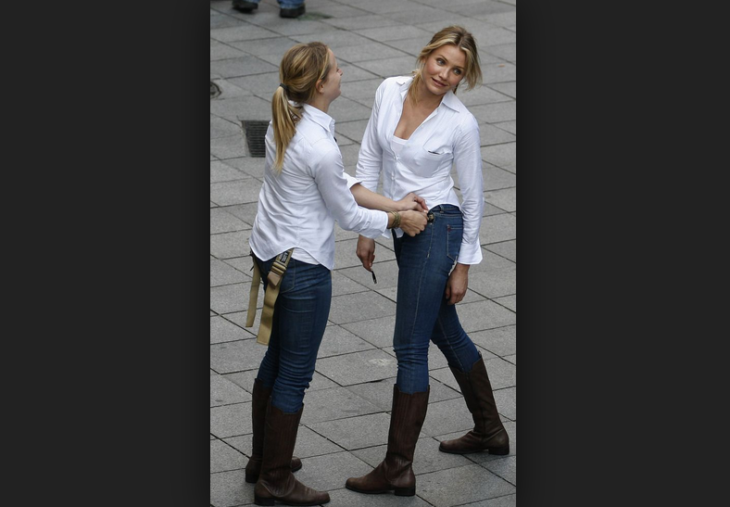 Can you tell the real Cameron Diaz from her “Other Woman” stunt double?

Taylor Lautner And His Stunt Double Reminder: Taylor Lautner exists! And he’s still a big enough star to get a stunt double!

Brad Pitt And His Stunt Double 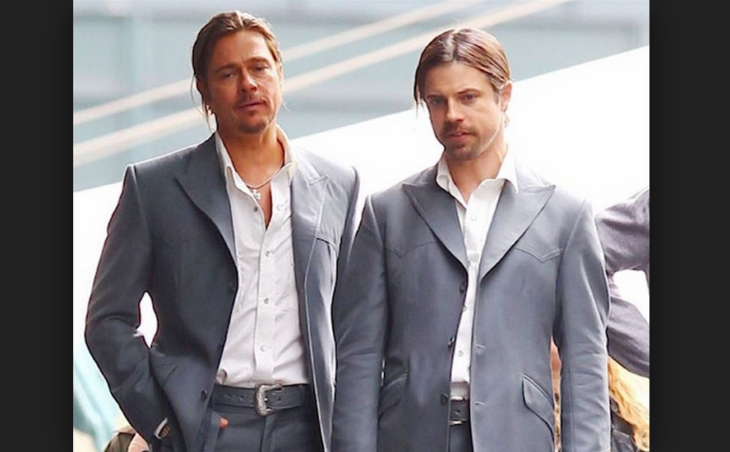 I am kind of obsessed with Brad Pitt’s longtime stunt double — but I can’t figure out his name! Here they are looking concerned on the set of Ridley Scott’s “The Counselor,” and despite this photo being posted far and wide on the internet, no one bothers to name the dude who risks his life so that Brad doesn’t damage his pretty face. Can we please give this guy some recognition? Unmask Brad’s Double, please!

Angelina Jolie And Her Body Double 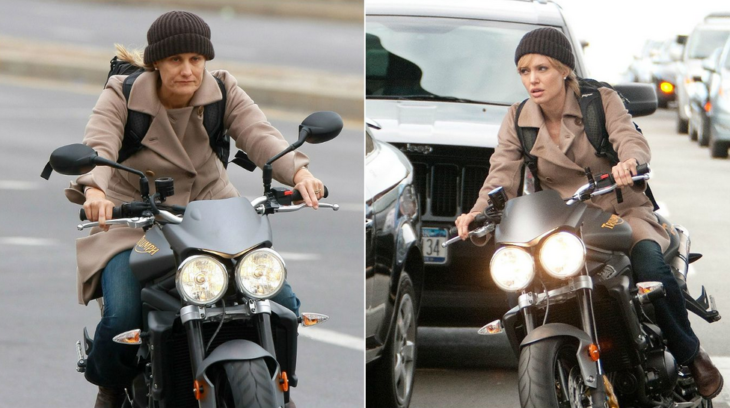 It’s clear from this image of Angelina hanging with her body double on the set of “Salt,” that doubles don’t have to really look exactly like the person they’re standing in for, so much as have a similar heigh and weight.

Jennifer Lopez And Her Body Double 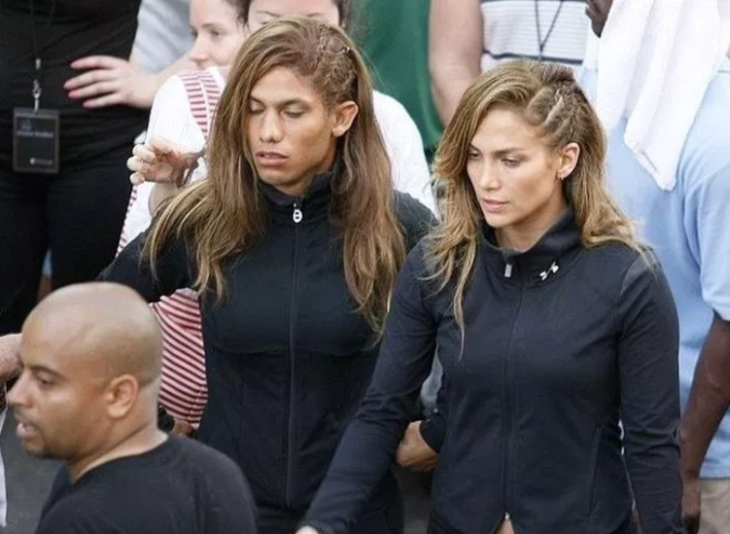 Hell, body doubles don’t even need to be the same gender. Just look at Jennifer Lopez’s manly double on the set of her video for the song “Follow the Leader”!

Charlize Theron And Her Stunt Double 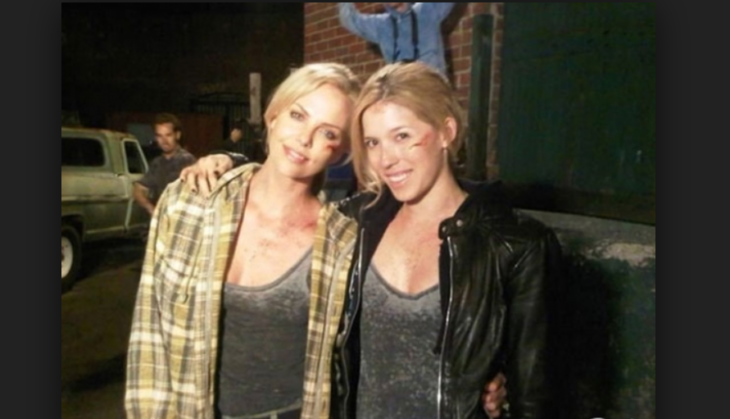 Alicia Vela-Bailey has been a stunt double for a whole mess of Hollywood stars, including Charlize Theron, Kate Beckinsale, and Rosie Huntington Whiteley.

Nicole Kidman And Her Dance Double 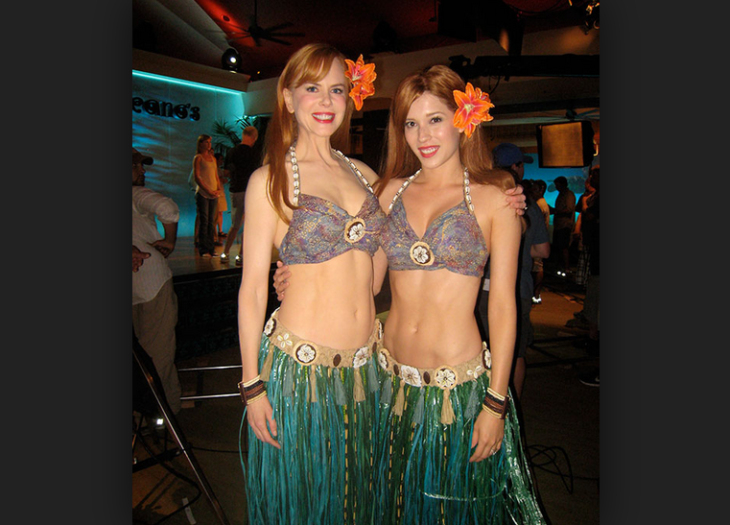 Vela-Bailey also has smooth moves on the dance floor – she did many of Nicole Kidman’s dance moves in the movie “Just Go With It”.

January Jones And Her Stunt Double 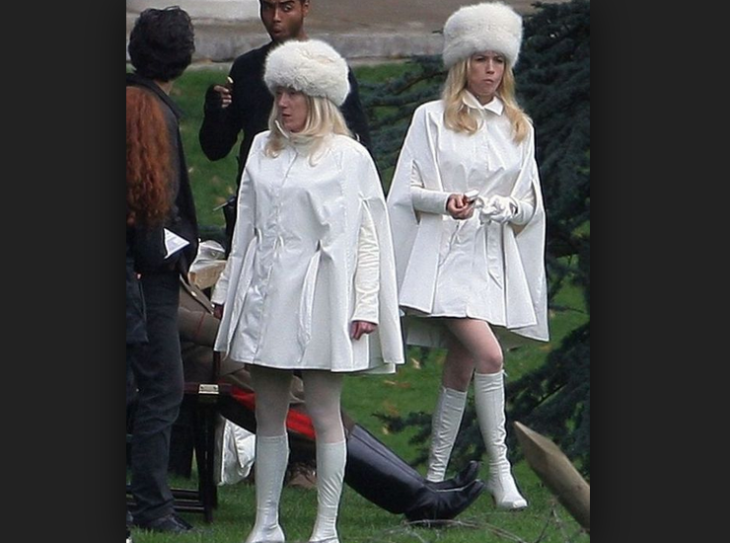 January and her stunt double both got to feel ridiculous in these all-white outfits on the set of “X-Men: First Class”.

Uma Thurman And Her Stunt Double 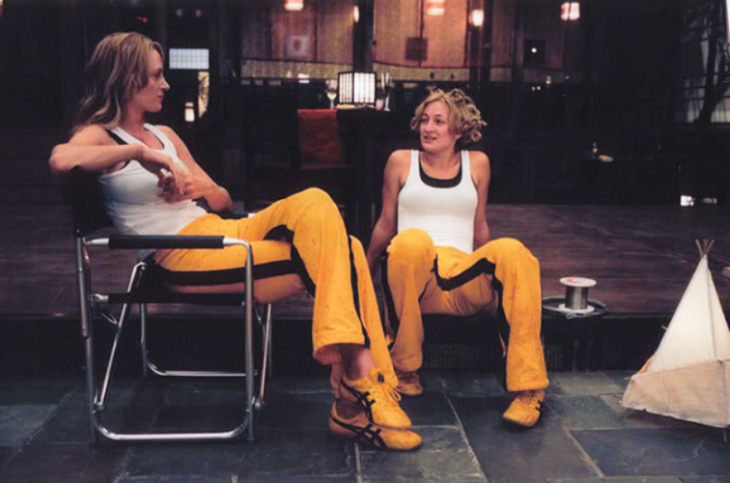 Thurman chills with her badass stunt double, Zoe Bell, on the set of “Kill Bill.” You mean Uma didn’t slaughter all the Bride’s enemies on her own?

Robert Pattinson And His Body Double 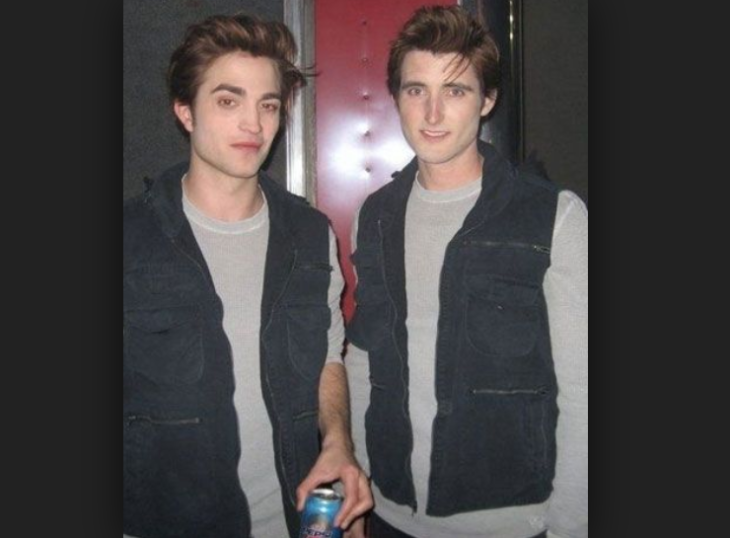 Rob Pattinson looks just thrilled to be standing with his body double, doesn’t he? Maybe he doesn’t like sharing that glittery vampire makeup…

Rupert Grint And His Stunt Double Tom Cruise And His Stunt Double 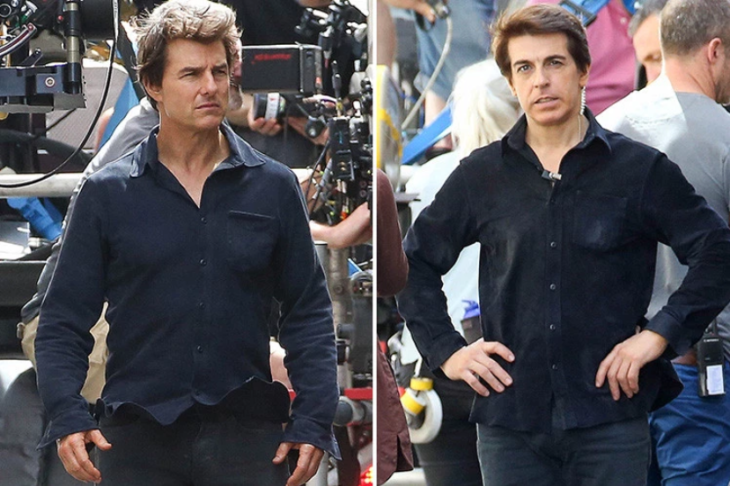 You mean Tom Cruise doesn’t do all his own stunts?! But he’s OTVII! He can move objects with his mind – stunts should be no problem.

Will Smith And His Body Double 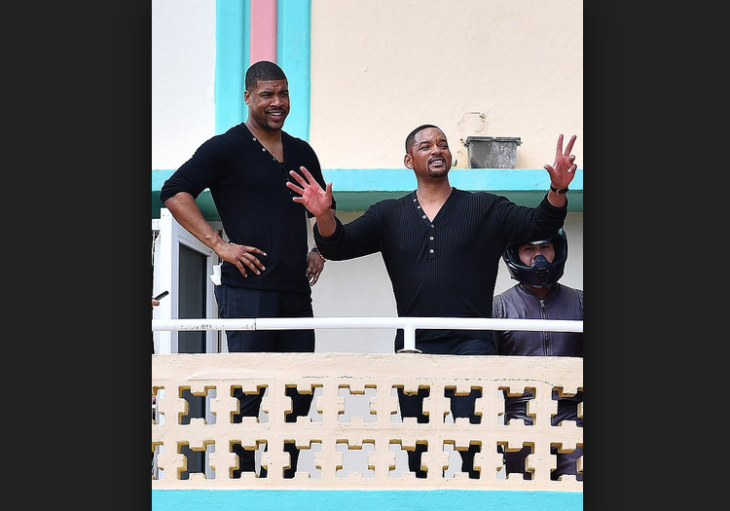 Something tells me Will Smith’s body double doesn’t get nearly as pimped out a trailer.

Lea Michele And Her Body Double 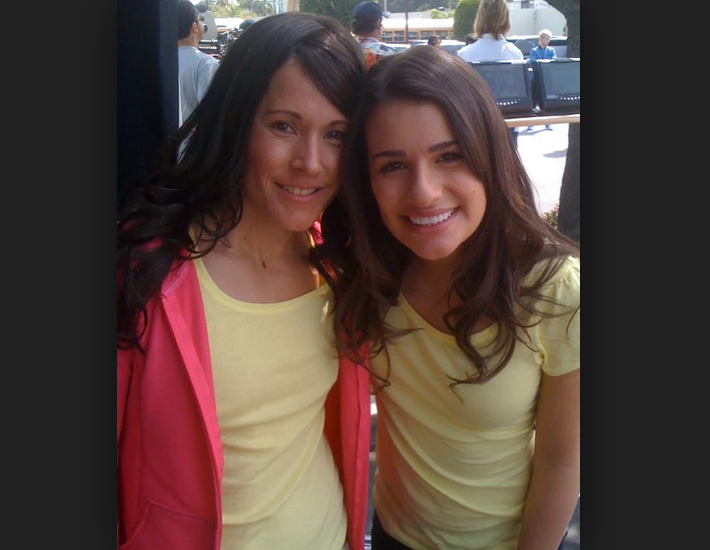 The “Glee” star’s double looks post-college aged rather than in high school.

Anna Paquin And Her Stunt Double 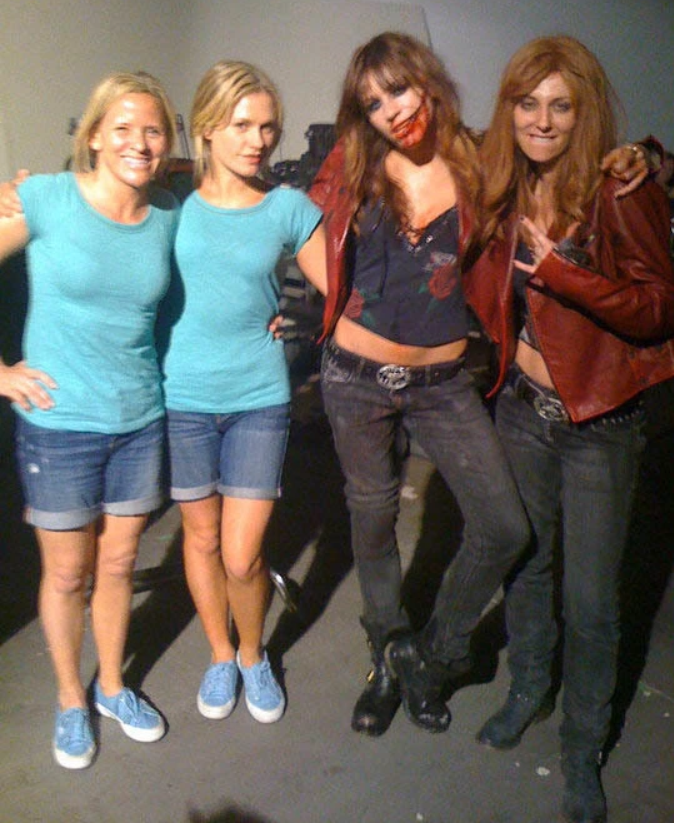 Now that Anna’s pregnant, I bet her stunt double is getting even bloodier on the set of “True Blood.”

10 Reasons Internet-Famous Cats Are Better Than Real Cats — In GIFs!

Not Okay: Naked Guy With Boner Attempts To Pick Up Women In Deeply Uncomfy YouTube Video