Back in February, Nadezhda Tolokonnikova, Maria Alyokhina, and Ekaterina Samutsevich — three members of the controversial Russian feminist band Pussy Riot — walked into Moscow’s Cathedral of Christ the Savior and engaged in a raucous performance at the church’s altar. Shedding their winter clothes, the girls, clad in colorful dresses and balaclavas, danced and jumped around. The women then turned the 30-second clip into a music video for their song “Punk Prayer: Holy Mother, Chase Putin Away,” a raucous, punk-tinged rant against Russian president Vladmir Putin. Within days, the video had gone viral — and the women of Pussy Riot had been arrested. 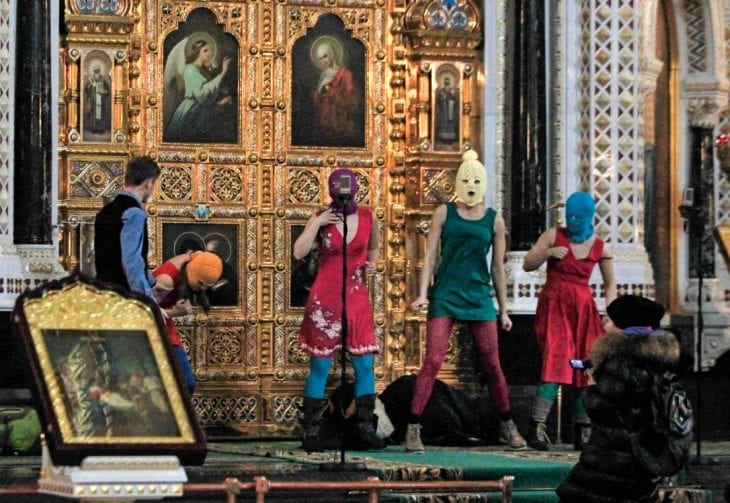 The women were charged with hooliganism, a humorously named crime with a rather serious sentence — up to seven years in prison.  Prosecutors charged that the church stunt insulted “the entire Christian world” and one member of the church who happened to be in the cathedral at the time, claimed she experienced “moral suffering” during the group’s performance. But Pussy Riot says it never intended to insult the Church or Orthodoxy, and instead say that the stunt was meant as an all out protest of Putin’s regime instead.

Pussy Riot employs performance because, according to their Facebook page, “We understood that to achieve change, including in the sphere of women’s rights, it’s not enough to go to Putin and ask for it. This is a rotten, broken system.” They’ve often been compared to the Riot Grrl movement of the early ’90s, and indeed, Pussy Riot cites Bikini Kill as an influence. “What we have in common is impudence, politically loaded lyrics, the importance of feminist discourse and a non-standard female image,” they told a reporter at The St. Petersburg Times. But where Bikini Kill’s protestations were largely against a culture of violence against women, Pussy Riot has been engaged in an all-out political fight. In a closing statement made by Pussy Riot member Tolokonnikova, she noted that the trial only served to highlight the corrupt nature of Russia’s justice system.

“Essentially, it is not three singers from Pussy Riot who are on trial here. If that were the case, what’s happening would be totally insignificant. It is the entire state system of the Russian Federation which is on trial and which, unfortunately for itself, thoroughly enjoys quoting its cruelty towards human beings, its indifference to their honour and dignity, the very worst that has happened in Russian history to date. To my deepest regret, this mock trial is close to the standards of the Stalinist troikas.” 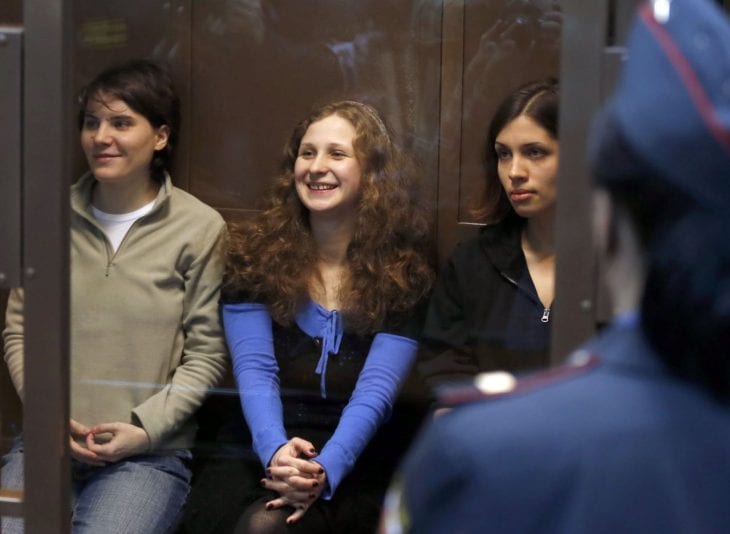 Their supporters are many, and include musicians Bjork, Madonna, and Tegan and Sara. The mayor of Iceland has thrown his support behind the women, and earlier this month, 121 members of Germany’s parliament sent a letter to the Russian ambassador to Germany in support of Pussy Riot. Even some who had previously been noted Putin supporters lobbied on the women’s behalf. But many within Russia have taken a hard line against the band, claiming that their church dance was akin to religious blasphemy. And in Orthodox Russia, an act against the church is considered an act against the state.

Despite the fact that the women have publicly apologized for the incident, many believe that Putin wishes to make an example out of Pussy Riot in order to reassert public power and control. “It’s personally Putin and his closest assistants basically leading this case,” believes Pyotr Verzilov, husband of one of the imprisoned women. “And it shows that on the twelfth year of controlling Russia, Putin is starting to lose the boundaries. He no more understands the limits of what he can do and what he cannot do.” But if Putin intends to make an example out of Pussy Riot, the trial has also served another purpose — to highlight the failings of Russia’s court system. And this, more than Pussy Riot’s particular brand of incendiary politics, has actually served to radicalize many Russians around the cause and has highlighted Russia’s social justice problems.

Explains Ilya Oskolkov-Tsentsiper, the co-founder of the Strelka Institute for Media, Architecture and Design:

Because they are so young. Because they have children. Because what they have done is so unimportant and silly and has all of a sudden become so huge because of this disproportionate reaction. Because it touches so strangely on so many things, and this is where it becomes an event of almost historic proportions. It touches everything: the church and the state, believers and non-believers, the judge and the tsar, and this Russian thing that never ever ends.” The women of Pussy Riot attend their trial while locked in a glass “aquarium” designed for prisoners.

Perhaps most threatening to Putin and Russia’s old guard, is the idea that anyone can be a member of Pussy Riot. The collective’s practice of wearing the face-covering balaclavas means to invite anyone and everyone to join them. “It means that really everybody can be Pussy Riot … we just show people what the people can do,” one face mask-clad member told The Guardian. And as with movements like Anonymous, they stand in stark contrast to the cult of personality of Putin. Indeed, Pussy Riot might not exist without Putin as corrupt foil to their punk-rock tinged radical politics. But after 12 years of Putin-led Russia, perhaps a counter movement was inevitable. Perhaps it seems surprising that it would come from a group of attractive young women, but the political history has always been full of opposition from unlikely sources.

The court is expected to reach a verdict this Friday. Whatever the result, Pussy Riot’s plight certainly reminds us that feminism is still considered verboten in many places. During the trial, anti-Pussy Riot witness Lyubov Sokologorskaya was asked if “feminism” was considered a bad word in Russia.

She responded, “In a church, yes.”