It’s no secret that Cristiano Ronaldo is currently the most followed person on Instagram, with over 185 million followers.

According to ESPN, he has also been ranked as a famous athlete in the world. But today, we want to investigate what caused him to have the largest following on Instagram! This includes covering his sponsors and the football clubs he has played for.

Happy to score and help the team in a tough match! 3 important points! #finoallafine #forzajuve

This resulted in him amassing a large following from loyal fans supporting both clubs.

Currently, he plays for Juventus Football Club who have 32.3 million followers.

We’ve seen time and time again, when a football player joins a club, they end up increasing the sales of a football club’s merchandise. The same thing can be said for fans who have such loyalty with football players, that they move their support over from one club to the club the football player is currently playing for.

Start of another week of training ⚽️????

At a worth of $400 million, you really think that he got all of his net worth from just playing for football clubs? A lot of it has to do with sponsors who contributed massively to his fame.

When a brand or company pays $500,000 to $5 million for a single sponsorship, they want you to represent their brand anywhere, everywhere. We’re not kidding, he even got sponsored to promote car engine oil!

KFC who don’t have necessarily that many followers on Instagram (1.5 million followers) but has a large customer base sponsored Ronaldo. It’s definitely an oxymoron for one of the world’s most famous fast-food chain to sponsor the world’s most popular athlete.

He started to appear on TV adverts across Arabia. The advertising campaign was so successful that they started featuring him all over Asia too. There’s no wonder that it is famous in Arabian and Asian countries. To add to that, according to a study by Plos One, fast food adverts have the highest frequencies of appearing on TV.

Did you know Ronaldo is one of three people to be given a lifetime sponsorship by Nike?

He could be using the toilet, take photos making constipation faces, and still walk out happy knowing that he has a lifetime sponsorship with Nike. Nike has 93.5 million followers on IG, so there’s a clear link with their website and TV adverts boosting his popularity both personally and on his Instagram. There are countless TV adverts featuring the dribbling with a football while showing off Nike’s latest boots.

Castrol approached Ronaldo back in 2009 to promote their popular Edge engine oil. But there’s a catch: Castrol also sponsored the FIFA Worldcup 2010 and Euros Championship. If you think that is peculiar, wait until you see who promoted further down.

As the person with the most followers, Ronaldo – if you’ve got a worldwide brand, then he might just agree to promote your products/services. Cristiano was featured on Castrol’s adverts as well as attending a premiere for their Edge engine oil.

7. Most Followed Person in men’s boxers?

Emporio Armani, who has 15.4 million followers, approached him to promote their range of men’s boxers. Ronaldo, in boxers, started popping up more and more in Armani’s Instagram campaigns. Once Armani sponsored him completely, he also started to be featured in TV adverts and big billboards. Just imagine the amount of coverage he would have got.

He is famous for being a collector of the world’s finest watches. He was sponsored by Jacob & Co. If you don’t know who Jacob & Co are, they are one of the world’s largest prestigious watch producers who have a million followers on Instagram. The brand regularly features in several Premium magazines, which boosts his popularity in another angle, different from appearing on TV.

TAG Heuer has also sponsored him, and it makes a lot of sense since his passion for watches. 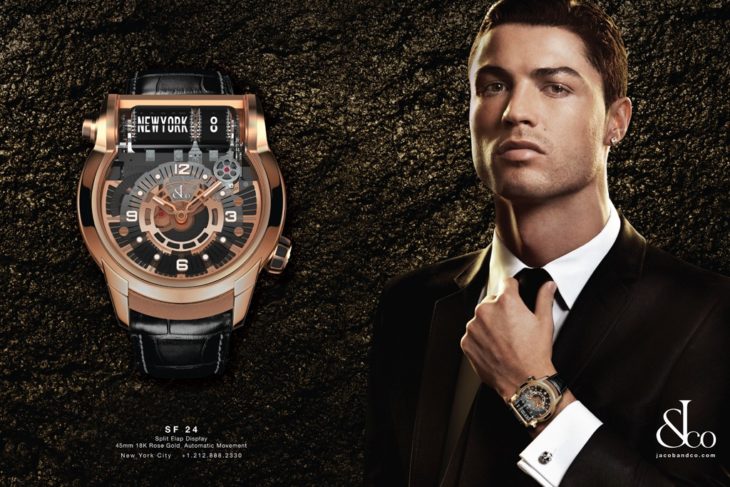 Emirates Airline who has 4.8 million followers on Instagram always push new adverts on TV. It’s how they first brought about their name before it was lowkey in Dubai, UAE.

Ronaldo and Pele, two of the most popular sports icons, were featured in a single advert by Emirates Airlines. This created a lot of buzzes. Emirates Airlines didn’t hold back, and they promoted this advert with worldwide coverage.

10. The most interesting sponsor

In 2017, Cristiano Ronaldo was sponsored by Egyptian Steel. Ever heard of them? No, we haven’t either. Of course, a lot of money was paid for this sponsorship, but the figures are unknown. Fans were left baffled when posted on Twitter the sponsored post: This may not have given him the most fame, but it is the most interesting sponsorship which has received.

11. Who comes after Ronaldo?

There you have it; we’ve pretty much summed up why Ronaldo is the most famous person on Instagram thanks to his football clubs and a tonne of sponsorship deals. So who comes after him on Instagram:

Seeing all these millions of followers on these famous people, are you interested in increasing your followers? If so, you can visit here.

A Land of Authentic Rajputana – Jodhpur