So maybe you’ve heard about Sweden’s weird Twitter experiment, wherein they’re allowing perfectly average Swedish citizens to take over the country’s Twitter account for a week at a time. The nation’s current national Twitterer is a woman named Sonja, who seems mildly obsessed with Hitler and Jews and “The Little Mermaid.” Don’t believe us? Check out this Tweet… 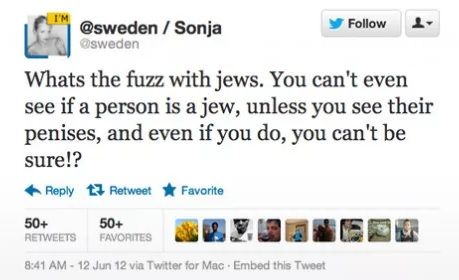 Ah, so much fuzz about Jews, you know? So Stephen’s kindly offered to take over the tweeting duties for Sweden. After all, he’s got about ten times as many followers as the Nordic country. And he’s slightly less curious about Jews. [Comedy Central]

Lena Dunham On Her Fears, Her Dog’s Penis

Why Geotagging Your Social Media Posts is Unsafe!