Serena Williams is a badass tennis player and couldn’t be bothered with a boring engagement story. Williams is engaged to Reddit founder Alexis Ohanian, and announced the upcoming wedding on — you guessed it — Reddit. Ohanian also confirmed their engagement on Facebook just in case anyone thought the Reddit post was a random troll.

The world-renowned athlete wrote out the story of how Ohanian proposed, saying, “I came home/A little late/Someone had a bag packed for me/And a carriage awaited.” Where were they off to? Rome, of course. Where else? “Back to where the stars first collided,” she wrote. “And now it was full circle/At the same table we first met by chance.” Eventually she got to the good part, saying, “Down on one knee/He said 4 words.” Obviously she said yes, and Ohanian added, “And you made me the happiest man on the planet.”

OK, you two. This is too adorable, even for our cold, cold hearts.

Williams and Ohanian started dating in 2015, and (based off her Reddit post) met randomly at a restaurant in Rome. The couple haven’t exactly flaunted their relationship, but they haven’t hid it either, and Williams posts photos of them on Instagram every now and then. 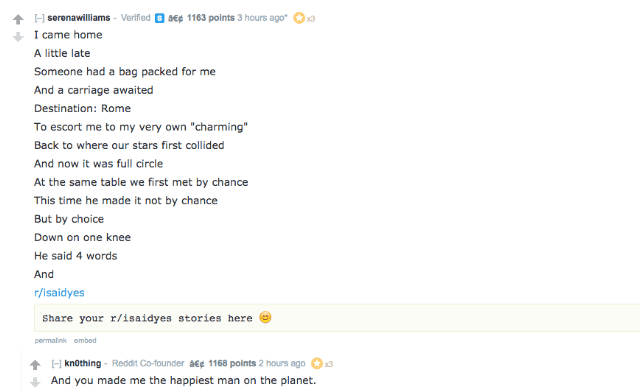 Ohanian better be worthy of the greatest athlete of all time, that’s all I have to say.

What did Serena Williams refuse to give Meghan...

Serena Williams revealed what the toughest part about...