Meghan Markle and Prince Harry are proud parents of a healthy baby boy. He arrived on May 6, but the protective parents wanted to keep most details about the labor private.

They put a framed message in the forecourt of Buckingham Palace for all the well-wishers to read on Monday afternoon. 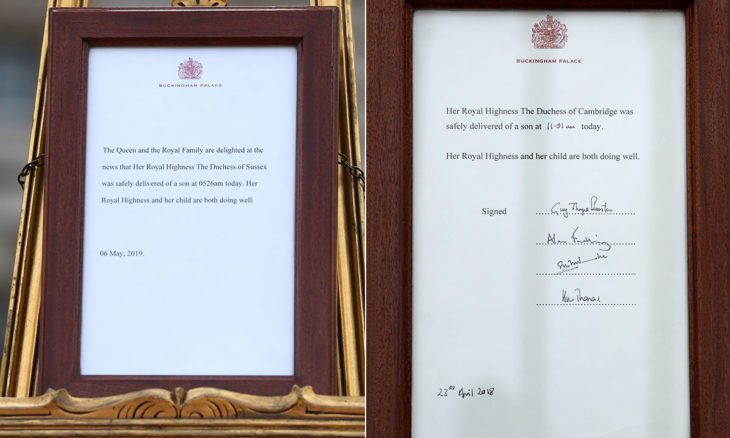 The baby Sussex’s easel has broken a new tradition

Sarah Thompson and Stephen Kelly were the ones who carried out the golden easel, followed by the bulletin in a wooden frame. Besides, the palace’s Union Jack flag was taken down and replaced with a bigger one. The details about the labor are kept private out of respect to Meghan Markle and Prince Harry’s wishes. They released that statement at the end of April. However, the public will get to see the baby in two days. The proud father announced the arrival of his son to the press, and also said that he is planning to make another announcement two days later so everyone could see the baby.

This afternoon, His Royal Highness The Duke of Sussex shared the news of the arrival of his and the Duchess’ first born child. Their son was born early morning on the 6th of May, 2019 and weighs 7lbs and 3oz. Their Royal Highnesses thank you for your support and kindness during this exceptionally joyful time in their lives as they welcome their baby boy.

An unusual thing about the baby easel is that it does not have a signature of the doctors who were present at birth like it was the case when Prince George, Princess Charlotte and Prince Louis were born.