The night before Valentine’s Day this year, I received a frantic text message from my friend Sara, who I knew was on a mission to pick up something frilly to wear for her new boyfriend. “OMG, I’m in the store and I don’t even know what the eff a garter belt is. Help…” I flipped open my cell phone and left her a message that was one for the books: “Sara,” I said sternly, “if you don’t know what a garter belt is, he sure as hell won’t know how to take one off. Look for a babydoll top and cute underwear. Step AWAY from the garter belts.”For Sara, a hot, curvy chick with a few body image issues, the concept of lingerie seemed foreign – silly, almost. What, she wondered, if he didn’t like it? If he laughed? What Sara didn’t realize at the time is that men just aren’t that picky. If you wear underwear that’s different, it’s hot. Trust me, he WILL like it. Plus, a hidden benefit to wearing lingerie is that it taps a reservoir of feminist sexual self-confidence that you might not know you have: Think Bettie Page, not Tawny Kitaen. Bond girl, not Pussycat Doll.

Remember that this is for you as much as it is for him. Try a look that’s rung your bell: a pinup-style ’50s corset? Sweet-but-see-through white netting? This is you, amplified – or your secret alter ego. And shop everywhere. After all the outfits I’ve modeled in front of my man (including a silk number from Saks), the thing he likes best is a sweet, almost Midwestern pale pink pinstriped bra-and-panty set I bought at Kmart for $18. Oh, and you’re controlling the outfit selection, but let him decide when to take it off — or leave it on. There’s something about doing a woman while she’s wearing something hot that gets a guy’s rocks off. 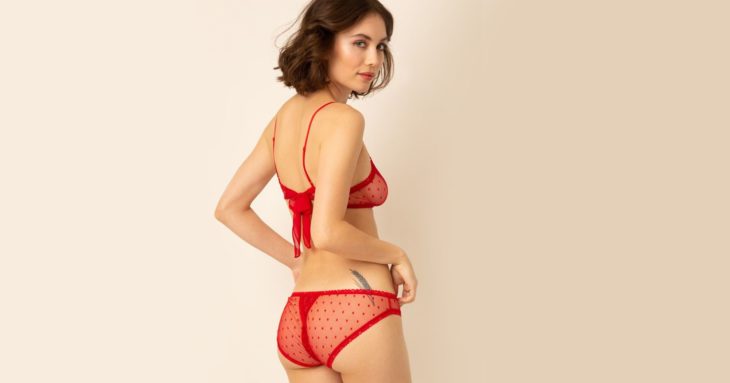 One important key to lingerie-wearing: Remember to make sure your guy knows that something is different — that the sex tonight will be hotter than it is when you’re wearing your usual beige t-shirt bra. For starters, buy a lacy camisole and wear that under your clothing instead of a bra if you have an after-work date, no changing necessary. Once he reaches under your sweater and his hand grazes the lace that just hits your midriff, it’s on. Brace yourself.

Anticipation leads to sexual frenzy. My guy recently took me an exclusive Manhattan restaurant for a special date. To anyone looking, I was dressed tastefully in a black cocktail dress and heels. When he touched my thigh in the cab, though, he realized I was wearing a garter belt and thigh-high stockings under my dress. The flirtatious heat we generated over our little winking, teasing secret lasted through all four courses. If garters aren’t your thing, try wearing thigh-highs alone with a knee-length skirt or dress, and “accidentally” give him a flash of the lacy band at the top as he’s helping you out of his car. 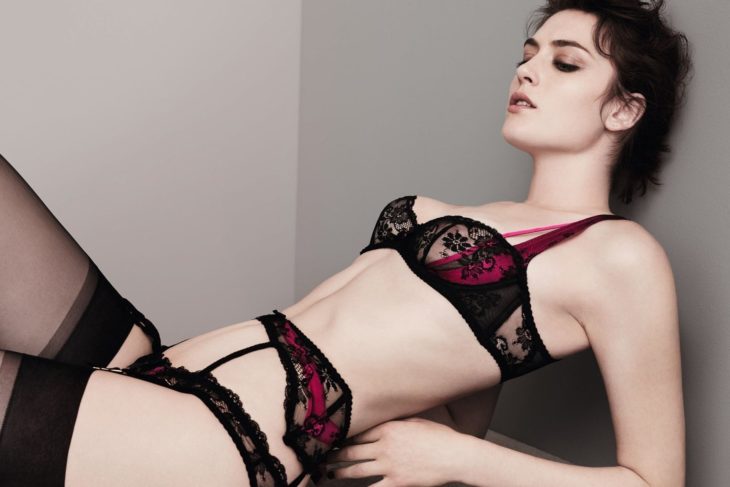 So he made you dinner on a Friday night, and you’re cuddling on the futon. An easy way to transition from feeling lazy to getting racy is by changing into full-on lingerie. Excuse yourself to the restroom (for example, say you’re going to brush your teeth), and retrieve what you’ve either conveniently hidden under the sink or stuffed in your purse. Try wearing something inexpensive that you won’t feel bad about ruining. I like the selection of babydoll chemises and matching panties at Victoria’s Secret — they have 75-plus styles online. Babydolls are flattering on all body types, and they run from about $25 to $40, so if he rips it off in a fit of blinding lust, oh well.

Once you’ve played out the above options and you’re feeling extra-frisky, pick out a fun costume yourself and surprise him with it. (Don’t get his input — make it about your fantasy and you’ll feel more in control.) Try Moon Costumes for the perfect sexy schoolgirl or bad cop – and have just as much fun picking out the matching accessories (say, a ruler and handcuffs, respectively).

My friend Sara ended up buying a fire-engine-red push-up bra with matching boy shorts for Valentine’s Day. And guess what? Her boyfriend liked her choice. She seemed a little surprised that he did, but I wasn’t. They always, always like it.

How to Impress Your Fiancee on Valentine’s Day