If you were on summer vacation when Bustle.com launched this summer, allow me to catch you up on the startup community’s version of a shitshow: in a piece on the tech blog PandoDaily, the founder of Bleacher Report, Bryan Goldberg, announced he had created a website for women. Bustle.com is not just not just any web site for women — it’s THE GREATEST WEBSITE FOR WOMEN OF ALL TIME. “Isn’t it time for a women’s publication that puts world news and politics alongside beauty tips?”  Goldberg wrote. “What about a site that takes an introspective look at the celebrity world, while also having a lot of fun covering it?”

Bustle hired a whole mess of low-paid young female writers and interns to crank out high volumes of content daily — a strategy Goldberg presented as women writing about content that interests them.  He, of course, would be the fundraising brains of the outfit  — as he so eloquently put it, “knowing the difference between mascara, concealer, and eye-liner is not my job.” Perplexingly, Goldberg also shared with the world his somewhat mangled definition of  feminism … which appears to be no more complicated than, you know, employing women: “Is [Bustle] a feminist publication? You’re damn right this is a feminist publication.” 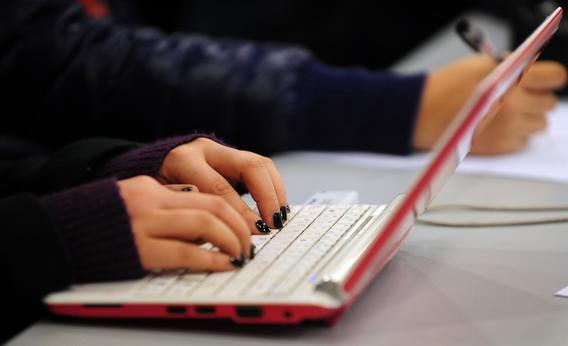 Sadly for Goldberg’s feminist credentials, Internet sleuthing quickly discovered that Bustle would pay writers only $100 per day, which translates to about $24,000 a year pre-tax. So Bustle is a feminist blog except for that whole “paying women a living wage” part!  When Goldberg first PandoDaily article was widely mocked across the Internet (including on The Frisky) — the best headline was Amanda Hess at  XX Factor, “Man Creates Very First Website for Women Ever” — he tried again with an apology post, which basically somewhat backtracked on everything his first post had said.

So, imagine my dismay this morning to discover that the launch of Bustle.com has an entire article in The New Yorker. You know, the most esteemed intellectual magazine in this country. At first I felt annoyed that journalist Lizzie Widdicome focused her attention on this flash in the pan. Then I saw the (above) photograph of Bustle.com CEO Bryan Goldberg. Surrounded by a group of young women, Goldberg sits with a laptop on a young woman’s bare legs, effectively using her as a piece of furniture. It makes you wonder whether this guy or his website have any publicist at all. And I feel pretty sure Widdicome is as convinced that Goldberg is a nincompoop, as evidenced by all the rope she gave her subject to hang himself with. 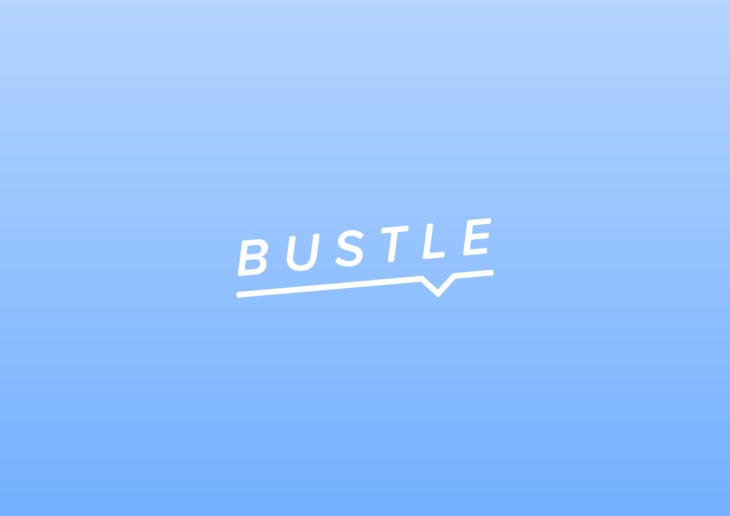 And these 10 delicious tidbits from her New Yorker piece only prove his cluelessness:

1. Bryan Goldberg seems to have learned nothing from the past criticisms that men actually aren’t from Mars and women aren’t from Venus  “I am a dude,” Goldberg told The New Yorker. “I don’t have a lot of overlapping interests with most women my age. I’m really into history. I’m really into markets and finance. … I don’t know a damn thing about beauty, but I don’t need to.”  We get it, Bryan. You don’t know anything about eyeliner. That’s girl stuff.  till Goldberg persists with the notion that men and women consume news about drastically different subjects, because, um, biology. Or something. His vision is burdened by a real “us” and “them” mentality between men and women, even on gender neutral subjects like politics. Furthermore, Goldberg’s quotes contradict themselves. He said he hired the young, all-female staff because he knows nothing about beauty … yet top stories one week were all about Syria. When his appearance was compared by the New Yorker writer to “a giant six-year-old,” the first image that flashed in my mind was the He-Man Woman Hater’s Club from “The Little Rascals.”

2. But Bustle will not be “pandering” to women, whatever that even means. Bustle is for ladies, because ladies be different. But Bustle is careful not to say it’s for ladies. “One thing we definitely didn’t want to do with this site is to have ‘women’ or ‘girls’ or ‘us’ in the name, or have, like, a sugary, candy sort of name,” Goldberg explained. “We didn’t want pink everywhere.” Why? Presumably because pink is icky. See: He-Man Woman Hater’s Club comment above.  (But it’s worth nothing that a quick look at The Frisky, Jezebel, The Hairpin, The Cut and Yahoo Shine revealed barely any pink at all.)

3. One of the main differences between men and women, according to Bryan Goldberg, is that men don’t read. The only thing ladies like more than beauty and shopping? Books. That’s why Bustle will have a lot of books coverage. “Men, to the best of my knowledge, don’t even read,” Goldberg told The New Yorker. “When’s the last time you heard a man say, ‘I’ve been reading this great book, you’d really like it’?” Maybe if he spent more time reading books … I’m just saying.

4. He regrets not getting the feminist seal of approval (TM) before Bustle’s launch. “[The negative reaction to Bustle] got me thinking,” Goldberg said, explaining that he wishes he had stronger relationships in “the feminist community.” He continued, “Honestly, nothing would have been more helpful here than for some highly regarded feminist writers to say, ‘Bryan’s a good person.’” Wow,  I didn’t know Jessica Valenti was handing out gold ribbons to certify Okay Dudebros Who Are Down With Feminism. If only Bryan Goldberg had gotten her to do that, I would have known he was a good guy and not had to think for myself about all this!

5. He had no clue what a “bustle” was.  Without question, a manly man Bryan Goldberg has never watched “Sense & Sensibility” or “Little Women,” so we can forgive him for not knowing what a bustle is — “a type of old-fashioned dress accessory.” He added, “I did not know that. I know now.” Apparently “hustler” is a term for a “a guy who’s successful, busy, cool and popular.” Goldberg hopes “bustler” will take off for women. In addition to beauty, English is not Bryan Goldberg’s strong suit either! “Bustle” as a verb already exists — with two definitions. One is “to be copiously supplied,” as in, the mall bustled with foot traffic. The other is “to proceed or move quickly,” as in, the caterers bustled around the party. The successful, busy, cool and popular woman that Goldberg is describing sounds like …. a hustler.

6. Or who Casey Anthony is.  “Which one was she again?” He asked the Bustle interns in front of the New Yorker reporter.

7. Or what Lifetime is. “Is that what Lifetime does? Make TV movies for women?” He asked.  COME ON, BRYAN GOLDBERG. YOU DEFINITELY HAVE NOT READ ANYTHING ON THE FRISKY EVER.

8. Bustle recruited its editors from Glamour magazine, the Daily Beast, Conde Nast and Hollywood.com — despite Goldberg’s claim that a women’s media property really needs him to give the ladies what they want. Despite poaching his launch talent from four extremely well-known brands (and reaching out to both Julie Gerstein and I from The Frisky, although we both said ‘no thanks’), Goldberg claims there’s a vacancy in the women’s media space that needs to be filled. By him. “If no one’s going to go out there and create the next great new women’s media property, then I’m going to do it,” Goldberg told the New Yorker. “Why not me?”

9. Goldberg apparently published that infamous makeup piece on PandoDaily about Bustle without running it by anyone at all on the Bustle staff. Sure, the column on PandoDaily is Bryan Goldberg’s column alone. But one would think — no, one would hope — that if he is going to publish an entire article about what Bustle will mean to the ladyblogging landscape, he might run it by one of Bustle’s editors first just to make sure he’s portraying it correctly. Apparently, he didn’t do that. “We would have edited out that makeup line,” Bustle’s news editor Rachel Krantz told the New Yorker.

10. According to the New Yorker, Goldberg “considers himself an expert in ‘markets and audiences.’ BWAHAHAHA.