Going to the gyno is a lot like going to the dentist for me. I hate the process, the tools, and the chance that I have a cavity or an irregular PAP smear. Either way, something is getting drilled or frozen off and there’s a co-pay. Now, there’s a robot gynecologist coming to hospitals and clinics and it’s going to be all up in your vag.

On some level, this means you might not have to talk to anyone looking up your cooch. On the other hand, it’s a fucking robot. Elmhurst Hospital in Queens, New York is the first public hospital to use it, but it’s rolling around (not really; it’s stationary, but that would be funny, right?) to other hospitals across the country, like Memorial Sloan Kettering Cancer Center, University of Texas-M.D. Anderson Cancer Center, Mayo Clinic hospitals, Johns Hopkins Hospital, and the Cleveland Clinic Hospital.

Some idiot named the robot da Vinci (if they really wanted to make women feel comfortable, they could have made it a woman, or at least McDreamy). Dr. da Vinci was cleared by the Food and Drug Administration in 2000 and can perform non-invasive surgeries. It’s just a machine with lots of little arms and tools and lasers sticking out of it, but I secretly wish it had a robot head and made awkward jokes about my sexual history and lectured me about smoking like my actual gynecologist (I really need to find a new one). 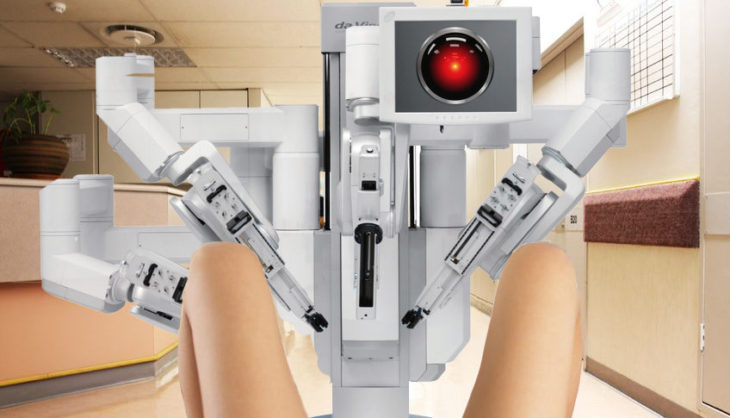 It’s not autonomous though, so don’t worry too much about the creepy robot doctor jokes. You’re likely to be knocked out if it’s in the room, since it’s performing semi-invasive surgeries. It works by inserting a small 3D camera and some “dime sized” surgical instruments into the patient with little teeny, tiny incisions. The surgeon is now, like, in you, and can look around, like that episode of the Magic School Bus. One surgeon is controlling the robot from a console in the room and another is over the body, making sure that the robot is doing everything right. I mean, have you ever tried to teach an old person how to use a Playstation controller? They need supervision.

The thing about robots and lasers doing the work is that it’s proven to be more exact, there’s less chance of infection, the incisions are cleaner, and all that jazz. So, technology is good and it won’t be giving you a PAP smear. Instead, it can “remove benign and cancerous tumors from the uterus as well as work on pelvic issues,” according Elmhurst Hospital officials. It can also give you a hysterectomy and is used in hospitals for urology, thoracic, cardiac, and general surgery. The system has been used in hospitals for gynecological procedures since 2005 and there have been a total 2.5 million minimally invasive surgeries performed using it.

Humans are still involved in the process, and it’s probably safer and better all around than regular, clumsy human hands cutting into you. I just don’t want a robot claw in my vagina. At least not while I’m conscious.

7 Things You Must Know About the New...