Sometimes siblings can be the absolute best, if only because they know all the weird stuff you used to do and you can talk to them basically however you want. These two sisters who came out at the same time definitely win Sibling Text Convo of the week. Last year, Kay, a 20-year-old who goes to Ryerson University in Toronto, texted her 15-year-old sister, Sam. Kay decided spur of the moment that it was time to tell her sister that she’s gay and spilled the good news in just a few words. “Hey I have something to tell you,” she wrote. “I’m gay.”

Her sister, who was saved as “Sam The Brat” in her sister’s phone, wrote back, “okay, as long as your happy, i’m happy, I love you no matter what, your still the same person.” Which is adorable and heartwarming, until you see that Kay, instead of reveling in love and acceptance, calls her sister out for using the wrong “your” in her reply.

The moment is killed. “FUCK OFF YOU WHORE,” Sam wrote back. Which sounds like most of the conversations I’ve had with my brother, so I can relate. But then they get right back to business and Sam tells her big sister that she’s actually bisexual. “MOM IS GOING TO SHIT HERSELF” were Kay’s first words.

These sisters came out to each other at the same time https://t.co/Oulw5EGHaT pic.twitter.com/OFQQ8yUxL1

Then they laugh that their “father” was going to have a rough time hearing the news, too. It’s one thing to have an ally in your sibling; it’s another to like, seriously have each other’s back while going through the exact same thing. Kay writes to her sister that she’s bisexual, too, but thought it would be easier to just say “gay” — so she didn’t even have to explain to her fam what the difference was, which just makes this story all the better. Kay told BuzzFeed, “It was a happy moment. I feel like I have someone to share my experiences with and, it’s my sister, so it’s even more special.” 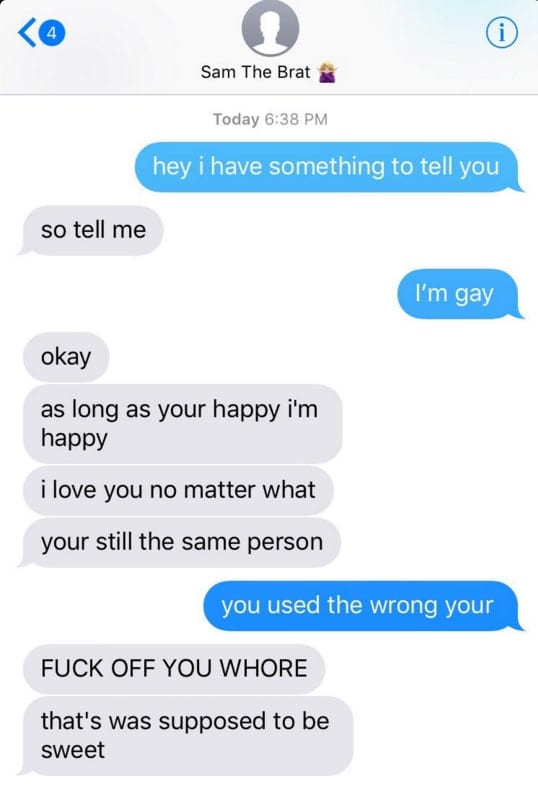 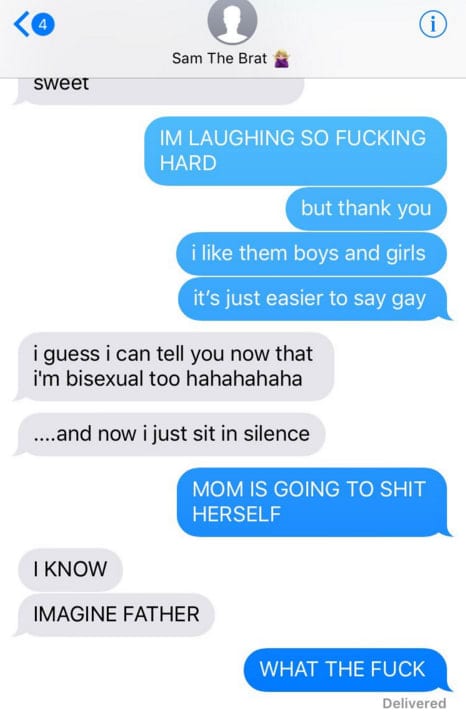 Other people were so into their exchange that they posted their own “coming out” texts, showing their friends and family being kind and chill about it. Coming out can be really hard (and sometimes dangerous) so it’s so nice to know that somewhere in the world, people are good.

There’s no word yet if they came out to their parents or if either of them shit their pants, but at least they have each other.

Bisexual Men (Who Definitely Do Exist) Are Better Boyfriends and Dads, Study Finds