Was ‘Gilmore Girls’ always as racist, homophobic, and fat-shaming as the revival is?

Did anyone else cringe all the way through the Gilmore Girls revival? Not just because Rory has her head wedged up her ass for the duration of Gilmore Girls: A Year In The Life, or because the writers lazily rely on tired jokes about hipsters to show us how times have changed, or because of the awkward scene that references David Foster Wallace as David Wallace more than once. No, the deepest cringes are for the blatant racist, homophobic and fat shaming attitudes throughout the show’s four installments.These are truly the things that make this year’s most buzzed about reboot painful to watch.

Much like the Full House second series, Fuller House, Netflix’s Gilmore Girls redux makes it excruciatingly obvious that what is in the past should stay in the past. Writer and creator Amy Sherman-Palladino has worked hard to stay faithful to the world she crafted for her characters, and while those characters were perhaps tolerable during the original 2000-2007 run, not having updated the show for today’s slightly more inclusive TV landscape brings the casual racism, homophobia and body shaming of the former show into sharp focus.

In the early 2000s, when Gilmore Girls premiered, I was slightly younger than Rory and while her uber rich family and small-town New England life were not exactly relatable, her teen angst was. The people of Stars Hollow, whom she preferred to those who resided in stuffy Hartford, were lovable weirdos. Excepting the whole Logan storyline, it was fun to watch Rory reject high-society life in favor of her simple roots. (Admittedly, that’s a huge thing to overlook; Rory definitely leaned the fuck in on high-society life eventually. At least the parts of it that advantaged her, while still hanging out in Stars Hollow enough to think she wasn’t totally a part of the one-percenter world that she was actively benefitting from. Anyway, Rory sucks but that isn’t even the point right now.)

In those early aughts, minority representation on TV was pitiful (to say the least), so the fact that multiple actors of color were featured in the main cast was progressive, at least on the surface. Casting Rory’s best friend as Korean-American appeared groundbreaking…until you took into account that her mother, Mrs. Kim, was a grating Tiger Mother stereotype and that all of the other Koreans in Stars Hollow besides Lane were treated as a monolith. Lorelai’s coworker Michel is a closeted gay black Frenchman, which again, was novel. Except that he’s reduced to an accent joke every time he’s on screen. Time and again, in the Gilmore world, an accent means you’re not worthy of being understood. By the far the most condescending storyline is a recurring gag wherein Emily Gilmore’s help—always foreign, almost always women of color—are interchangeable and disposable.

The thing about nostalgia, which is all the more clear in a Trump’s America™, is that it romanticizes good, even mediocre, even horrible, and washes out all unpleasantries, even if the unpleasantries are definitive to the thing being romanticized. Problematic as the show was, the elements that endure are the close relationship between Lorelai and Rory that all mothers and daughters sort-of-kind-of wish they had, the fast-talking, the unexpected cameos (Norman Mailer?), and the inhuman coffee consumption.

For those wondering if the Netflix version is anything like the original, it is, especially in the way that it continues to fetishize skinny white women and caricature anyone who doesn’t fit that mold. I didn’t grow up in a small town, so forgive me — maybe people truly are that incapable of noticing how offensive they’re being, but it’s too easy to write the show’s problematic comments off simply because it’s set in a small town.

With Gilmore Girls, it’s always been difficult to discern when the writers are winking at the audience. Are we supposed to be laughing at the characters — like when Emily says she has no idea what language her maids are speaking because she’s ignorant and doesn’t take the time to get to know them, or are we supposed to laugh along with her because hey, isn’t it crazy that they speak broken English and isn’t it hilarious that Emily is somehow fundamentally incapable of figuring out which language the people who share her home are speaking?

At a cursory glance, it appears that the show has taken notes on lack of diversity seriously, as there are a few more extras in town with melanin in their skin, and even some with speaking roles (although not many, and it does feel like very obvious and superficial placement of brown and black bodies as props intentionally placed to absolve the show of its more systemic and unrefined crimes) And as you keep watching, you realize that maybe somehow, the show’s characters have gotten even worse.

Mrs. Kim, Lane’s mom, is up to her crazy old tricks in the “Spring” episode, leading a group of lost-puppy Korean teens around the International Spring Food Festival. They’re her choir, “fresh off the boat.” Why does she need these kids off the boat? Why does it sound like they’re products, items, that she acquired? Why don’t any of the Koreans get to have personalities? Lane’s mom was always chiefly characterized by her harshness and a litany of other qualities unquestionably derived from your standard Asian mom stereotype, but it seemed in the revival like time and distance from the original run of the series had impressed upon the showrunner’s a compulsion to push through heavy-handed character exposition by putting the characters into an even more extreme level of the clichés they were already dripping in. So, like, we’d remember who they are. The problem is, when who the characters always were was prettttty offensive and kinda racist, trying to reintroduce them in just a few moments on screen meant going even deeper (and doing so very quickly) into the parts of them that were always problematic.

Later in the same episode, there’s a bizarre gay witch hunt. Now that Michel’s finally out, I suppose Amy Sherman-Palladino is patting herself on the back for her progressiveness. But in the scene where the town discusses its Pride parade, things get weird. Tight-ass Taylor, the town selectman, announces that there aren’t enough gays in Stars Hollow for a parade, because people haven’t “volunteered” to out themselves. He’s contacted nearby towns to ask if they could “lends their gays,” you know, because gays—like Koreans—are interchangeable items, not individuals. The joke here is supposed to be that everyone suspects that Taylor is gay, and that he’s not owning it. But why should he? Luke can’t even wrap his simple brain around the news that there are three gay people in town. Good stuff all around.

And then there’s Lorelai’s mom, Emily Gilmore. True to form, Emily Gilmore has a new maid, Berta, at the start of the series. Shockingly, she actually holds on to this one throughout all four episodes. Berta is more humanized than her previous maids, but once again, a running joke is that Emily is clueless as to what language Berta is speaking. Berta’s entire extended family moves into the Gilmore mansion (and all end up working for her, and none of the other members of the family get speaking roles, or names), and later, Emily’s Nantucket home. The eldest Gilmore girl is painted as a generous benefactor. Commenters online have noted that it’s sweet that Emily “adopted” the family. 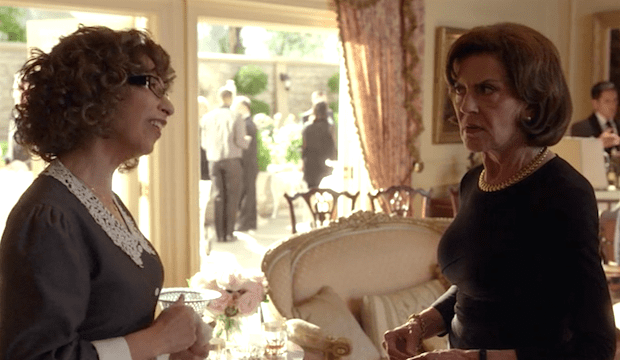 In truth, Berta has offered to move her family in to take care of a woman who is so clueless, she doesn’t know how to boil soup. Sure, Emily is grieving and in a numb state, but the whole storyline reads like a weaksauce commentary on immigrants moving in and taking over. Every time Berta is on screen, Emily has to comment about how she has no idea what Berta is saying or what Berta is cooking, or who the other people are in her house because they “keep appearing.” Perhaps Rory could have schooled her grandmother on Google translate? Isn’t the grating backbone of these scripts all about pounding into our heads that it’s 2016 now?

In the final episode, “Fall,” Berta and her family are nestled asleep in chairs in Emily’s Nantucket abode—do they not have a room to sleep in? No, seriously: Eventually Emily sells the huge house that could’ve comfortably fit all these new people, opting to chuck it (it makes her sad because dead husband) in favor of living at a much smaller beach house, where Berta’s kids end up sleeping in chairs. (OK, admittedly, they could’ve just been napping there, but it sure as fuck looked like Emily was tucking them in for the night in arm chairs while their mother slept on a couch behind them.) But hey, again, these people of color are not treated as people so much as objects; you can just put those anywhere.

And then there’s the fat shaming (because of course there is). The most surprising of all. Gilmore Girls was once a show that celebrated fuller ladies, like Sookie, Babette, and Ms. Patty. Hell, they even let Ms. Patty be defined in part by an effusive sexuality; Babette was always presumed to be boning the shit out of her guy, and Sookie got a fairly well-developed romantic storyline. True, these characters were ultimately aesthetic foils meant to cast Lorelai and Rory’s dewy, bony asses into exalted relief, but hey, let’s just decide to call body-size representation in the original series something slightly less than a total nightmare.

But in the revival, plus-size bodies became just another topic for Rory and Lorelai’s shtick. In the “Summer” episode, whiny jobless Rory and smug fake Southern belle Lorelai spend their days judging overweight men at the Stars Hollow Municipal Pool. They have a code word for them, Pat. Or Butterbutt. So original. The pool is a “minefield” for these men, Lorelai notes in repugnance. Who are Lorelai and Rory to judge? They worship junk food and abhor exercise. I am convinced they suffer from hyperthyroidism, or some other metabolic disorder, which allows them to maintain their slim figures while stuffing their faces at every possible opportunity, but that’s neither here nor there because it’s rude and gross to assume things about how people’s bodies work and why they look the way they do.Like, doesn’t it seem like two people who inhale shitty food and never exercise, and yet retain slender bodies, should be more aware than most that a person’s outward appearance is a piss-poor measure of their lifestyle (not that it really matters anyway)? 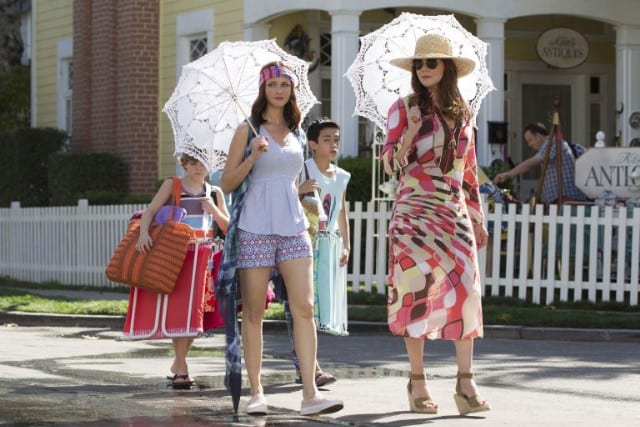 And speaking of that pool scene, let’s pay no mind to the young Asian boy who, for completely unexplained reasons, spends the whole time standing behind Rory, shading her from the sun with a parasol, later running after her carrying her things while she engages in drama with other white people, calling her fucking “Khaleesi.” Let’s just skip over that batshit moment.

For a show that obviously embraces white-girl feminism, Gilmore Girls is perennially, insufferably tone deaf to issues of race, class, homosexuality, and body acceptance. It’s got a shiny, liberal façade, but at the core of the show is an unhealthy obsession with blah basic bitches. Here’s hoping there’s no season two for the Netflix show. (And no, we truly do not care about what becomes of those final four words.)

A 4 Here, A 6 There: Does Designer Sizing Disturb You Too?