Is It Good to Wear a Snake Pendant?

Snakes are animals who have had a lot of presence in our religious texts as well as our everyday lives. While today many people have few issues with these creatures, due to urbanization and us being separated from their habitats, there are still certain meanings snakes invoke. Carrying jewelry with these animals also has us represent some of the symbolism, so let’s delve into the matter and see if it’s good to wear a snake pendant.

Meaning of snakes in ancient history

Snake pendants may be very aesthetically attractive, but they carry certain connotations. The jewelry like this has a rather spread-out meaning that has been represented for a while. Quite far back, in fact, considering the meaning these animals had throughout our species’ history.

Even back in ancient Egypt, snakes were present as a symbol of sovereignty, the right to rule, and divinity. While most often associated with kings and queens of the ancient world that lorded over their kingdoms, these reptiles had the meaning of protection too. Whether the person was of considerable status or just part of the common folk, pendants, and items with these serpentine designs on them were supposed to give protection to the person carrying them.

The storied history of Egypt does yield a few more symbolic meanings for snakes, but these are the most prominent ones. When it comes to animals, these were one of the most important animals portrayed in Egyptian culture and can be spotted in many pieces of art as well as clothes of that age.

Symbol throughout the ages 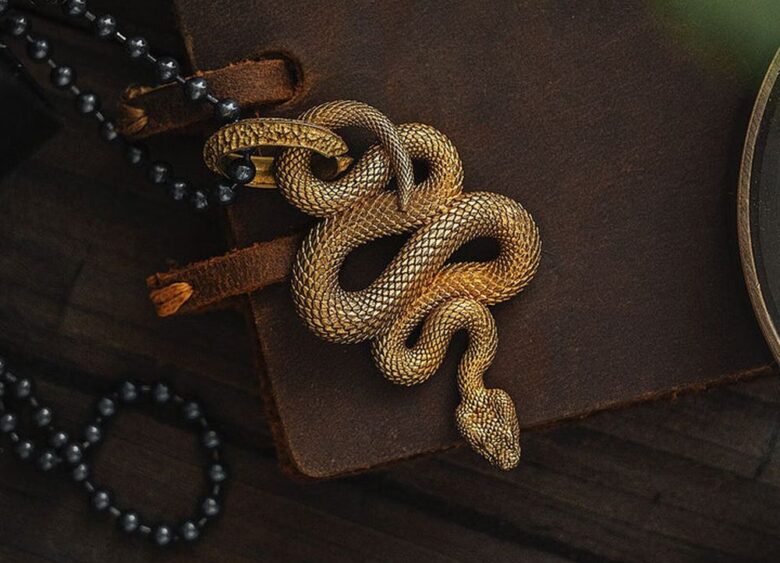 The symbol of the snake has survived through the ages. Consistently changing its meaning from civilization to civilization and with every new age, humanity entered. Sometimes they would be a symbol of fear, sin, and danger, but nonetheless, they would maintain a more amicable meaning in some spheres of human life.

The most noticeable one is undoubtedly the symbol of medical workers being a staff with coiling snakes. This symbol is also very old, dating all the way to the ancient Sumerian civilization. However, it has been introduced in Greek culture as well as a staff wielded by Hermes, a messenger of the Gods. The symbol has lived through many iterations and ages but has maintained its meaning as a symbol of medical workers.

As ages went by and we got close to our modern age, snakes became prominent parts of various designs. Be these designs jewelry-related or parts of other aesthetics, serpentine designs were frequently used. The slithering shape of these reptiles is a great way of giving every curving line a bit more character, which is why they were so prominent. Even today, we can find a ton of jewelry with this design in mind, despite the design approach carrying more of an aesthetic value than a symbolic one. There are a lot of shops where such items can be found, even online, such as coppertistwu.com. The shop offers quite a choice of snake themed jewelry, ranging from brass rattlesnake tail pendants to keychains with various reptiles on them. Whether you are seeking a bracelet, a necklace, or any other accessory, this shop will provide you with some options to choose from. The site offers a full catalog to check out so it’s worth a visit.

However, there’s another meaning that’s more related to the snake jewelry specifically and ties to the personal meaning of the animal more. Let’s see what it is.

Snakes as symbols of transformation

The current meaning of the snake pendant draws on another aspect of snakes, change. The aspect of change is represented by snakes through their shedding of skin. They leave behind its old skin and reveals a new one below it. This symbolizes transformation, removing the old characteristics we hold and unveiling new ones.

In every person’s life, there comes a time when they feel a need to change or spontaneously reach it. Whether it’s an event that sparks this change or a time of great introspection, we will nonetheless end up altering our traits while growing as a person. This is represented by snakes perfectly, while they grow physically after shedding skin, humans grow emotionally. This correlation is similar to one people find with the term “coming out of your shell,” where there are implications of great change and manifestations of our true selves.

The skin we were once in has grown too tight and constrictive for us, leading to discomfort, dissatisfaction, and a wish to change. Which is where the transformative symbol of this animal comes in.

Those who are more spiritually inclined will have that meaning expressed and reinforced through snake pendants and similarly designed jewelry. Some even believe that carrying this symbol enhances and speeds up the transformation we go through. Their shedding is coming sooner, and a new personality shines through the removal of the old.

Meaning of a snake pendant 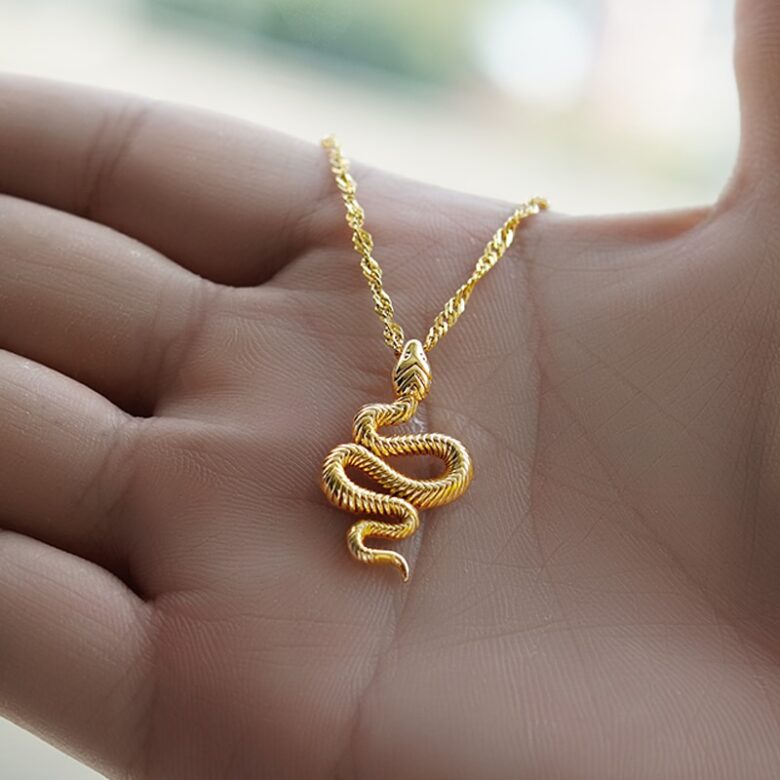 Wearing the pendants that have snakes on them is good for those who are going through a transformative state. Whether you are spiritual yourself or not, this piece of jewelry can act as a reminder of our eventual goal of change. The change can be anything you currently wish to achieve but need that extra push. Even if it comes in the form of something as simple as a piece of jewelry, it could give us more encouragement.

The switch to this type of jewelry can be a first sign of change in on itself. If we haven’t worn similar jewelry or have replaced our old style with a new, more serpentine-themed one, we are already delving into the idea of change and transformation.

Outside of the symbolic parts of snake pendants, there is also the simple fact of them being very fitting for many occasions. The aesthetics of a coiling snake are a detail that has been present throughout the ages and has had many iterations. More than just pendants, these designs have often been present as a part of rings, bracelets, necklaces, and many more types of jewelry. Whether your reasons for carrying a piece of jewelry that represents snakes are spiritual, personal, or just a matter of aesthetics doesn’t matter in the end. The jewelry representing these animals carries positive connotations and provides fruitful accessories to our clothing.

The spiritual meaningfulness shows you as a responsible person ready for change, while the more mundane choices still carry a sense of style with them. Therefore, carrying a snake pendant is a good choice regardless.

Can Probiotic’s Help With Skin Issues Like Psoriasis and More?

The Perfect Balance of Healthy Eating and Exercise

Guide To India: Tips And Tricks To Know...