Who do “Inception,” “Transformers” and “The Muppets” all have in common? I was scratching my head on that one. All three movies are examples of “the Smurfette principle,” explains Anita Sarkeesian of the blog Feminist Frequency. “The Smurfette principle” is a common trope in movies and TV shows that try to be palatable to male audiences by having an ensemble of nearly all male characters with one token female character, who is oftentimes uber-feminine (Miss Piggy) or super hot (Megan Fox) or otherwise unthreatening.As Anita explains, “A trope is a common pattern in a story or a recognizable attribute in a character that conveys information to the audience.” For example, the ‘hooker with the heart of gold’ or the ‘magical Negro.’ Movies and TV shows that use “the Smurfette principle” bank on the decades of evidence that show us whether we’re in Winnie The Pooh’s 100 Acre wood or in “Star Wars”‘s galaxy far, far away, women are very often token characters in men’s storylines. (You can also see examples of “tokenism” when there is one actor/actress of color, often stereotyped, in an otherwise white cast — Fez on “That ’70s Show,” for instance.) 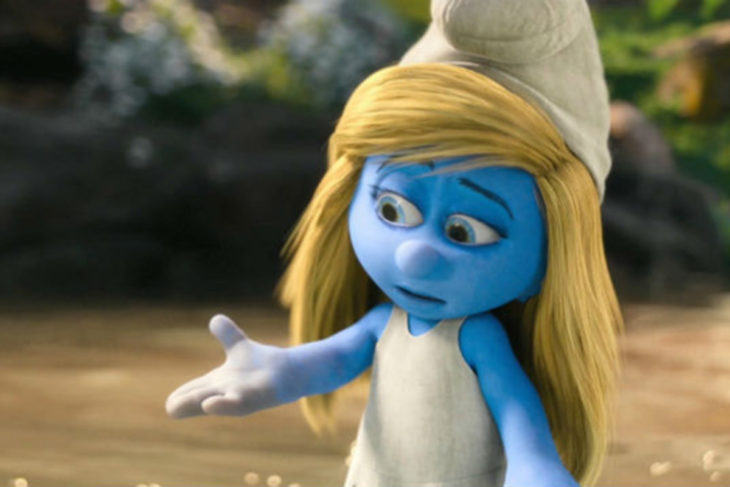 Of course, “the Smurfette principle” doesn’t apply to all shows or movies. From “Dora The Explorer” to “Mighty Morphin’ Power Rangers” to “Gilmore Girls” to “Buffy The Vampire Slayer” to “Sex & The City,” there’s a bunch of examples of ensemble casts that are either mostly female or split 50/50. But it’s nevertheless troubling how many examples of “the Smurfette principle” exist, especially on shows and in movies aimed at impressionable little kids. While boys get lots of options to choose from of which character — Kermit, Scooter, Animal — they’d most like to be like or model themselves after, girls are given Miss Piggy and that’s it. And it certainly doesn’t help when the sole female is portrayed as the love interest of the lead boy, as both Miss Piggy and Smurfette are. As Katha Pollit wrote in her original 1991 piece about “the Smurfette principle” in The New York Times:

“Boys define the group, its story and its code of values. Girls exist only in relation to boys.”

Adds Antia Sarkeesian, “Basically this means men are the default and women get to be sidekicks or sexy decorations.”

This video about “the Smurfette principle” fits neatly with another video Antia Sarkeesian made about “the Bechdel test.” “The Bechdel test,” you might remember, is named after a comic by Alison Bechdel and is a test to see whether a movie stars more than two women characters who talk to each other about anything other than men. Both principles illustrate a depressing state of modern filmmaking — the fact that screenwriters should be asking themselves:

I’m curious about your thoughts on “the Smurfette principle.” Share them in the comments.

Meghan Markle is Stress-free Since Moving to Canada