Right now, there are two insanely restrictive abortion bills sitting on Ohio Governor John Kasich’s desk. One, called the “Heartbeat Bill,” would ban abortion as soon as a heartbeat can be detected, which is usually around six weeks. The other would ban abortion at 20 weeks. They’re both terrible, and the stakes are ridiculously high, so Ohio residents are getting creative to protest the “Heartbeat Bill” and the 20-week ban.

Protestors have been tying coat hangers to the fence around the Ohio Statehouse with messages about the bill, like “stop the ban” or “healthcare not hangers.” In reality, both bills would restrict access to abortion so drastically that women would have to resort to extreme measures, like dangerous self-abortions, and the hangers are a striking way to get that message across. 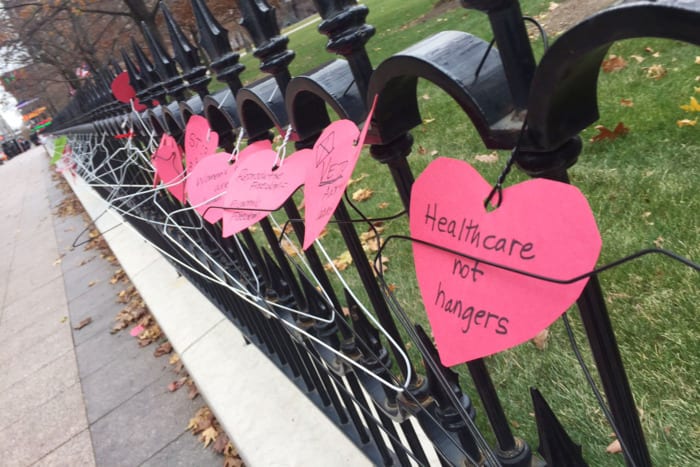 The protest was organized on Facebook by Andrew Miller, an Ohio-based author. The hangers have been removed once, so Miller and other advocates have rallied people to get out and restock. Miller said he started the protest because he wants his daughter to grow up in a world where she can make choices about her own body. He told Fox 45 in Ohio, “There are surely people on the other side of this argument who are unwilling to consider anything past what is happening within the womb but I hope that they take a moment to consider those with the least among us who will suffer ever further indignation due to regressive legislation like this.”

Advocates are protesting outside of the statehouse and calling Kasich’s office, too. On Sunday, there were “dozens” of protestors outside of the statehouse with signs and tying their messages to the perimeter fence with coat hangers, to symbolize the danger and physical harm that women will face if these bans are passed. NARAL Pro-choice Ohio is also giving women the contact info for media outlets to write letters to the editor asking Kasich to veto the bills, and there is an online petition you can sign.

“I believe that we can’t go back to the old way of women getting unsafe abortions, because this bill won’t end abortions, this bill will make abortions unsafe again,” Ohio State University student Katie Greer told WHJL NBC. More protestors were at the statehouse on Monday, too.

Kasich has until Dec. 17 to veto the bill, or even just line-item veto the heartbeat provision since it was tacked onto a child abuse bill. The situation for choice in Ohio is dire. Right now, the “Heartbeat Bill” would be the most restrictive abortion law in the country. Most women don’t even know they’re pregnant until after six weeks, and there is no exception for rape or incest. It is forced pregnancy.

Kasich may very well veto it — if only because he plans to sign the seemingly less radical ban preventing abortions after 20 weeks.

This 20 week thing is based on the myth that a fetus can feel pain at that point of gestation, although there has been no evidence to back that up. The American Congress of Obstetricians and Gynecologists (ACOG) said in a statement that there’s “no evidence of fetal perception of pain until 29 weeks at the earliest.” The organization also said the ban would mean doctors can’t do their jobs, and that it would “harm women’s health in very clear ways.” Uh, yeah. Not to mention that Roe v. Wade says abortion is legal up to the point of viability, which is usually around 24 weeks.

Both of these bills harm women. Let’s hope the protestors can make enough noise to get through to the governor.

People are taking photos of their dogs meeting Santa and like, I get it

“Comedians In Cars Getting Abortions” Reveals The Truth...