Study Finds Married Women Have More Abortions Than Anyone Else

In popular imagination, women who get abortions are young, single, and promiscuous, hopping carelessly between one-night stands. I’m not one to look down upon women pursuing whatever lifestyle they find pleasing, but it’s a pretty offensive characterization, as if abortion is some shameful procedure reserved for scared teenagers, and married adult women with families are somehow above it. So you can imagine my elation when I discovered a new global study revealing most women who get abortions are married — quite the plot twist.

The World Health Organization and Guttmatcher Institute found that 73 percent of women around the world who have abortions are married. As a disclaimer, this number is dramatically lower in America where about 85 percent of women who have abortions are unmarried, but the reasoning behind married women disproportionately being the recipients of abortion around the world is something we could all learn from.

An earlier study by Guttmatcher Institute produced in 2012 found that mothers who have abortions do so due to both “the material responsibilities of motherhood” and the “abstract expectations of parenting.” Or, in other words, these days, the best way to successfully offer children a quality upbringing in terms of funding their educations, extracurricular pursuits, phone plans, financial security, etc., and providing them with enough attention and quality nurturing, is to limit the amount of children you have.

Most abortions, 41 million a year in 2014, were obtained by married women, new Lancet study found https://t.co/OuSUb1lj5l

The trend of married couples having fewer children started to emerge later in the 20th century and, today, 22 percent of women between the ages of 40 and 44 have had only one child, compared with 11 percent in 1976.

An advocate for birth control and contraception at a time when abortion was still a new, very risky procedure, Margaret Sanger understood that a primary reason so many immigrant families struggled with poverty was that they couldn’t stop having children, aka additional little persons to feed and clothe. This gave rise to dangerous back-alley abortion procedures in the name of financial security. It’s important to remember that today, where abortion rights empower middle-class, financially stable women with the bodily autonomy we all deserve, to poor struggling families, abortion rights are key to survival.

Yet this perspective is hardly, if ever, considered by conservative politicians who ironically boast the cozy “pro-life” label, but oppose measures to financially support low-income families or the adoption programs that these children end up being born into.

Incidentally, one Catholic nun shared the exact same sentiment in a scathing excerpt from her upcoming book:

“I do not believe that just because you’re opposed to abortion, that that makes you pro-life. In fact, I think in many cases, your morality is deeply lacking if all you want is a child born but not a child fed, not a child educated, not a child housed. And why would I think that you don’t? Because you don’t want any tax money to go there. That’s not pro-life. That’s pro-birth. We need a much broader conversation on what the morality of pro-life is.”

In America, while the majority of women who receive abortions are unmarried, 59 percent of them have had at least one child before, which could imply the decision to obtain an abortion was made with the purpose of focusing more on giving children already born good lives. And at any rate, if it matters, 31 percent of unmarried abortion patients live with a partner, and that many women who have abortions are unmarried could arguably be interpreted as a feminist victory.

Attitudes about marriage and female independence are changing. I’d like to think society is approaching a point where women can be single all their lives and exert full autonomy over their bodies without judgment. 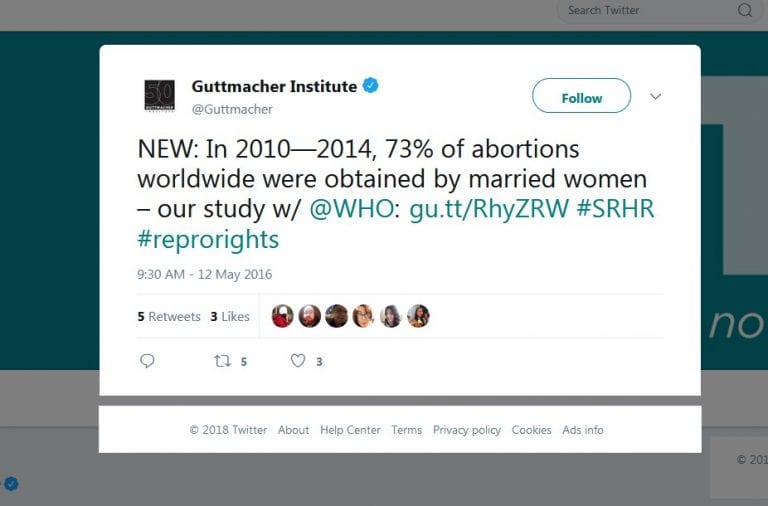 Unfortunately, the myth that around the world, most of the women who have abortions are single is hardly the only myth around about abortions. Here’s just a few that have been thoroughly busted but remain irritatingly prevalent:

But here’s a question: At the end of the day, how much does this study really matter? I’m a huge fan of offensive myths and stereotypes about abortion patients being busted, but how much does it really matter if an abortion patient is single or not? If she was promiscuous and not always being safe, if she goes on to question whether or not she made the right decision?

The point is that at any given stage in their lives, women of all circumstances should be able to make decisions about their bodies.

Glossier Is Makeup For The Truly Lazy