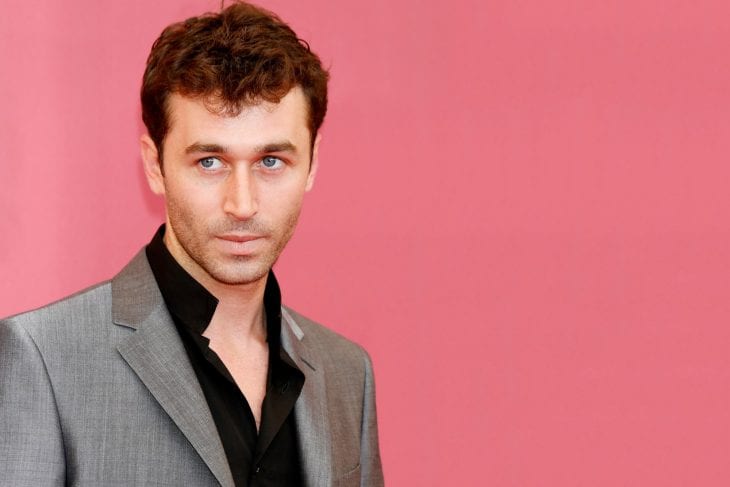 In the meantime, get a taste of James by reading our Q&A below…

Amelia/The Frisky: Don’t you ever get tired of having sex everyday?

I have mediocre sex all the time, doesn’t that ever happen to you? Do you have to pretend like it’s awesome, even when it’s not?

I don’t pretend it’s awesome if it’s not. I’ve done scenes where I’ve said, “I’m going to teach you how to have sex” and then I just do stuff. Girls are just as bad at sex as guys. And a lot of people don’t … sex … there’s no wrong way to do it. There’s a bad way to do things. But it varies person to person. There’s no right way to suck dick, there’s no right way to eat pussy – what might be right to you might be wrong to her. I try to engage in proper communication in order to ensure having the best sex possible.

Do the women always come or do they sometimes fake it?

I have no idea. If I always knew if girls were faking their orgasms or not I would probably be a way better sex-haver. I have no idea if anyone ever comes for real.

I can pretend to. I only know what I’m told. I like to live in a world where they’re not lying to me. But I like it when my partner has an orgasm. I’m into that. It’s fun.

I’m always amused when guys tell me — and there have been quite a few who have — “I always make girls come, girls never fake it with me.” Dude. Of course they have.

I’m confident there have been a few girls that have faked it. There has to have been! I’ve done over 4,000 scenes!

If you nailed it every time, you’d be in some sort of hall of fame.

There’s no possible way. I don’t know. I try to talk about it, I try to think about it. When I’m having sex and the person I’m having sex with comes it’s … accomplished isn’t the right word, powerful isn’t the right word. I have feelings of that nature, but none of them are right. None of those are correct. It’s doesn’t make me feel “powerful” to bring someone to orgasm, it doesn’t make me feel “accomplished” like it’s a feat, it doesn’t make me feel special. But it gives me a feeling beyond physical sensation that I like. And it arouses me to watch people have orgasms, and not just women. I mean, I like women too, but if I’m going to watch people have sex, I don’t want to just see a woman come, I was to see a dude come, I want to see everyone come!

And you always do?

Come? No, I usually don’t. I rarely come. I only come if I’m on camera or if a person requests it.

You mean at the end?

I think they’re probably talking in terms of how many times the dude came. It goes along with the general belief that sex is over once the guy has orgasmed, where men think sex is done when they’re done, even if their female partner hasn’t come.

Yeah. I can see that. It’s not an uncommon statement to make, I’ve heard it before.

I guess there’s this sense that men are different, that they have to come and that with women it’s kind of optional or up to chance.

There’s physiological and physical issues with the whole blue balls thing. I’ve never experienced [blue balls] because if I want to come, I just come. Like, if you and I were having sex right now and you were like, “Okay I’m done!” and then left, and I’m like, “Wait, but I still have to come–“

Yeah, you’re not going to be like, “Well, guess I’m not coming then!”

I feel like there’s this expectation that you either come during sex or you don’t.

Sex in general, we’re just fucked up about it. People don’t communicate! They’re confused and they’re scared. Sex is weird, it makes them feel things. If people had a correct understanding of sex and sexuality, everybody would be talking and be cool with it, prostitution would be legal, and I wouldn’t be sitting here as a fascinating subject. I would just be a dude who has a job!

You’re right. Your fame is due, at least in part, to the fact that there is so much taboo surrounding sex. If there wasn’t a taboo, well, you’d still have a job I’m sure, but it probably wouldn’t be as lucrative or fame-inducing.

Who knows? Whoooo knowssss? Speaking of which, is your fame weird to you?

I don’t think I’m actually famous. I’m fake famous. What constitutes fame? Does Garth Brooks know who I am?

Maybe not Garth Brooks, but I bet Miley Cyrus does.

Is it weird sitting across from someone who you know has jerked off to you? [This might be the moment that all of the booze I had been drinking hit me all at once.]

There’s a certain sense with people who watch your work that they knows you. Like, I just watched you have sex last night.

You don’t know me, you just know what my penis looks like!

[Laughing] But seriously is there any downsides to being known for the work you do?

Have you ever thought of doing any gay scenes?

Yeah! There’s something really hot about a totally straight dude taking it up the ass. Why not? Your prostate is up your butt, why wouldn’t you?

Yeah, in some capacity. It’s partly why I started a company, that desire to be involved in the adult film industry for as long as I possibly can.

The adult film business is at a precipice right now where it needs to decide between furthering itself into legitimacy or falling back into the shadows and going deeper into them. We’re a constitutionally protected and legal business and now we’re being treated like a constitutionally protected and legal business – but the problem is the people that are in charge of deciding what the regulations and rules are have no knowledge about what the adult industry needs. Take the whole issue of condoms. Adult performers do not want condoms. The adult film industry does not have an issue that requires us to use condoms. If condoms were 100 percent mandatory on every single set for the last 10 years, every single person that has HIV that was in the adult industry would still have HIV. It would not have made a single difference as far as HIV is concerned. the only difference that I believe it would have made is that it would have opened up risk, because people would have gone underground and continued to produce in an illegal environment and would not have followed industry regulations which would have exposed more people to more harmful things. It would have resulted in more sites that were not operating in an ethical and consensual manner, producing content with people who are not sober and —

Right, it’s requiring us to become educators, when we’re not educators! We’re entertainers. Condoms are great in that they do help, but they’re mostly birth control – they don’t really help with a lot of STDs. Syphilis is skin-to-skin.

And herpes is skin-to-skin too. Yes, there’s chlamydia and gonorrhea, but if you have syphilis on your penis and you wear a condom, yeah, you’re more protected, but realistically, that stuff oozes. Condoms are hardly foolproof.

There are scenes all over the place. All the time. I’ve shot tons of them. With straws, pretending it’s drugs, girls pretending they’re addicted — they’re addicted to sex, so they use it as a metaphor. You know, for shock value. So then that becomes something that, let’s say, 20-year-olds —

The same kids who are pouring vodka in their eyes to get drunk.

[We’re interrupted by our waitress, who delivers our meals — ravioli for James, pastrami sandwich for me.]

And is the impact then going to be that suddenly the average dude is going to expect the women they fuck to rosebud?

Maybe. Maybe not. Who knows? I’m not a doctor, I don’t know what the scientific repercussions of expelling your anus —

I just think in general, the asshole is not supposed to fall out like a slinky.

What? Are you serious? Don’t tell me that! [Pauses to take bite of pastrami sandwich, seriously.]

Maybe not every time, but yeah, it happens a lot when women give birth. The perineum also gets torn up. I have no idea what the scientific reparations of a prolapsed butthole are, but I imagine, like a lot of muscles, controlling your rectum and anus and the muscles in there, you’re actually strengthening it. I mean, there’s an argument that could be made that [using the anus muscles to expel the rectum] could be good for you. I don’t know if that’s accurate, I’m just playing devil’s advocate because neither of us are doctors or scientists and yeah, it does seem like there’s some sort of negative repercussion. It doesn’t seem right – that’s not where your rectum goes.

I just wouldn’t want it falling out at inopportune moments.

Yeah. Absolutely. But does that make it bad for you? Harmful? I don’t know.

I hear you. It also looks fucking scary. It doesn’t look like a healthy thing to have your internal organs become external.

Now you’ve got me playing devil’s advocate, but YEAH.

I see the point. I would go as far as to argue that if that is an ability that you have, I would check with a doctor before doing it. Like, that fetish when you put shit in your dick hole — there’s a name for that. I can’t think of it. Shoving forks, pens, things into my dickhole. If I were really into that —

Have you done that?

I’ve been tested for chlamydia and gonorrhea by putting a Q-tip in my urethra, but I got no sexual satisfaction or enjoyment from it at all. But some guys love it! They make rods specifically for it so you can insert rods and dilate your urethra in order to put more things in it. Don’t know why.

I know guys who have had kidney stones who wouldn’t shut the fuck up about the screaming horrible pain of passing a stone through their urethra.

Yeah, they say it’s the closest feeling a male could have to giving birth.

Yet there are people who enjoy that sensation enough to … well, I guess one man’s trash is another man’s treasure.

Yup. If I was into that, if it felt good, I wouldn’t continue to do it, I would check with a doctor and be like, “Hey, so, uh, what damage could I be doing to be body? Let’s talk about this. How can I do this safely?” I Google a lot. I like to research. I like to know.

Are there sexual activities that you’re intrigued about that you haven’t done yet?

Not that I know of…