If you are looking for the role-playing games, but you don’t have enough time to play them on lap-top or desktop, then you will enjoy our list. This kind of games can provide for you a fantastic experience, and the best part is that you can play them anywhere you go.

We made a list of the 20 best Android games that you can play in 2023. Take a look at the list below and decide which game you will enjoy the most. 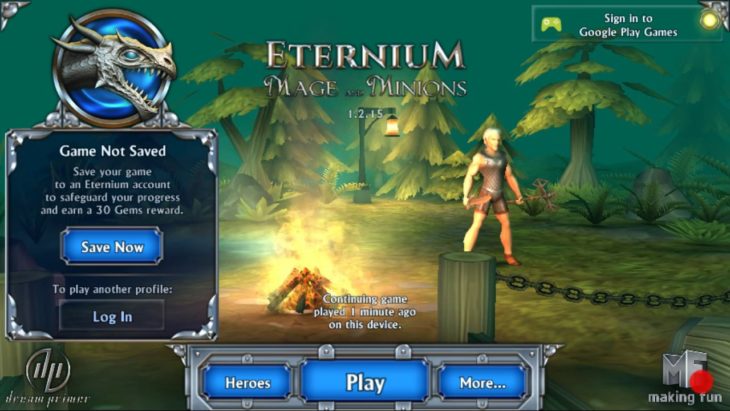 Eternium is an exceptional adventure game that you can get for free on the Google Play Store. It has three fantastic crafted worlds which you can research with your companions. The main story is to rescue your friends and to continue your adventure with them. In the journey, you can choose whether you want to play as a bounty hunter, warrior, or mage. Also, all kind of ultimate weapons is available to defend you from zombies, demons, skeletons, and other dangerous monsters. The best part is that the game also has a Trials of Valor, the game mode which provides you to play random levels, once you are done with the main story. It’s incredibly convenient that you can play Eternium while offline and only to connect on the internet when you need updates.

If you love the TV series Game of Thrones, then you will love this game, as the plot is in the same universe. At the beginning of the game, you choose the role of one of the famous characters.  Then, you will get asked questions (in the shape of a card) with two answers. Before choosing one of the two options, you should think about it because each option will have consequences, that will not be indicated in cards. Four factors are essential: religious favor, military strength, state wealth, and domestic popularity, so you should choose wisely. It comes with a reasonable price of $3.99. 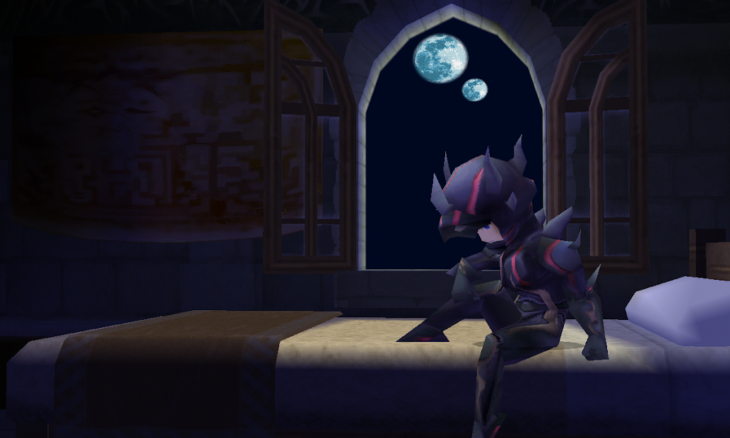 Final Fantasy is one of the most incredible RPGs of all times. Luckily, now is available for Androids and still follows the same storyline. It has incredible features like combat in the real-time, choice of several characters, and a lot of weapons that you can choose to defeat your enemy. The price is $15.99. 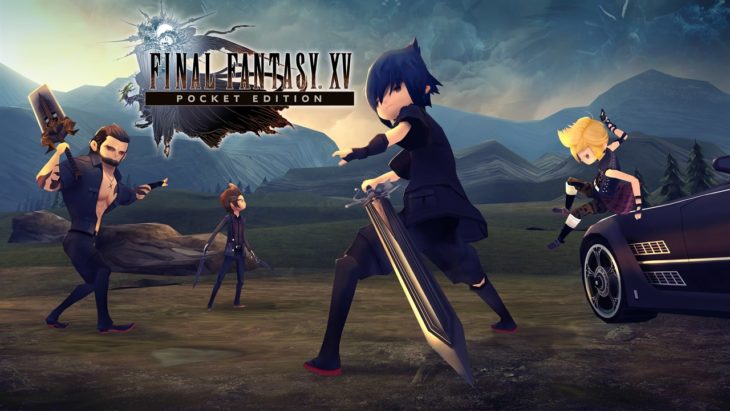 Pocket Edition is the upgrade for Final Fantasy XV, and it comes with some improvements. For example, it includes the open world, and some side quests are added. The story is the same as well as voice acting and music. This RPG comes with a little less intensive graphics. Final Fantasy XV Pocket Edition has ten chapters. The first chapter is available for free and the rest you have to purchase. 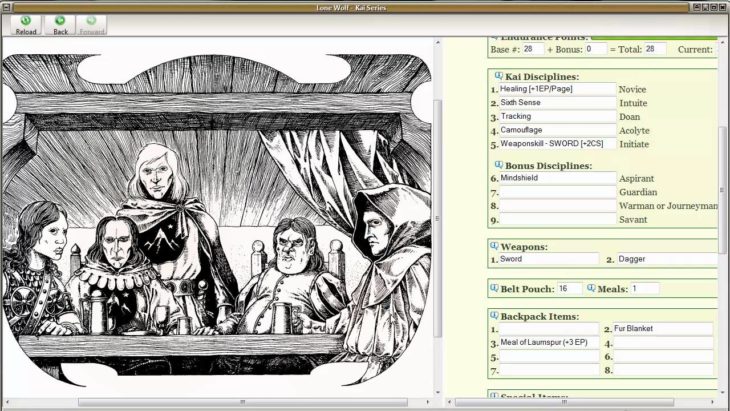 The RPG is based on the books Lone Wolf, which are written by Joe Dever and you will get a chance to influence the course of action. Same like in the original writings, you can take the role of Kai warrior and save the kingdom from a horde. The direction of the game is your choice based on the decisions you make, and the combat depends entirely on dices so you will need luck. You can download Kai Chronicles for free. 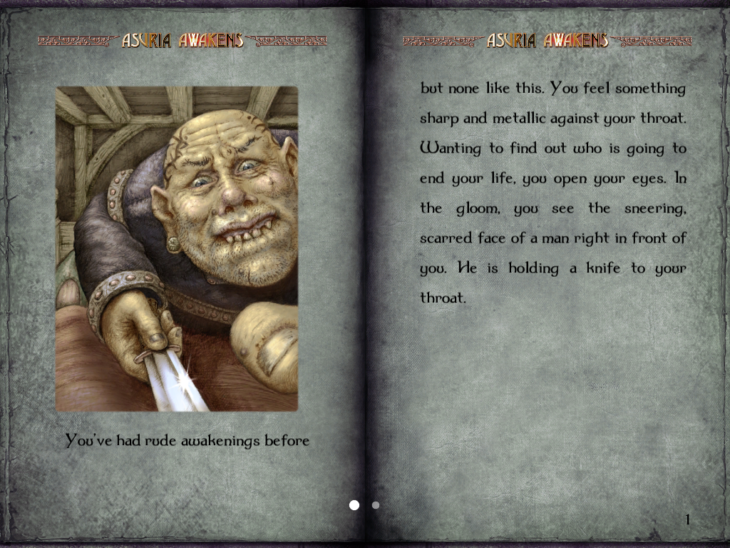 This narrative-driven role-experience game will provide the best fun if you are a fan of those kinds of games. It is similar to Kai Chronicles, and it depends on dices.  It offers automated Adventure Sheet which will keep track of your inventory and stats. By shaking your device, the dice will start rolling. If you don’t like reading, then you should skip this game, but if you are a fan, you should explore all 11 titles. The price is $7.49. 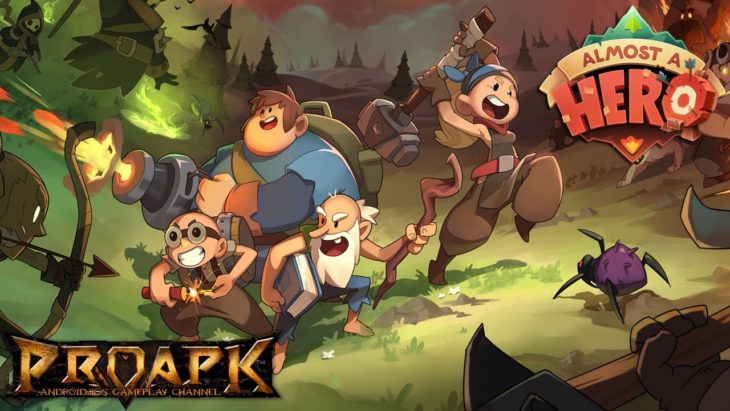 The game has a simple story of 15 useless idiots, and they are trying to become heroes. You have a task to teach them magical powers and battle skills. The control for this game is simple, as the tapping does all the job. You can download it for free. 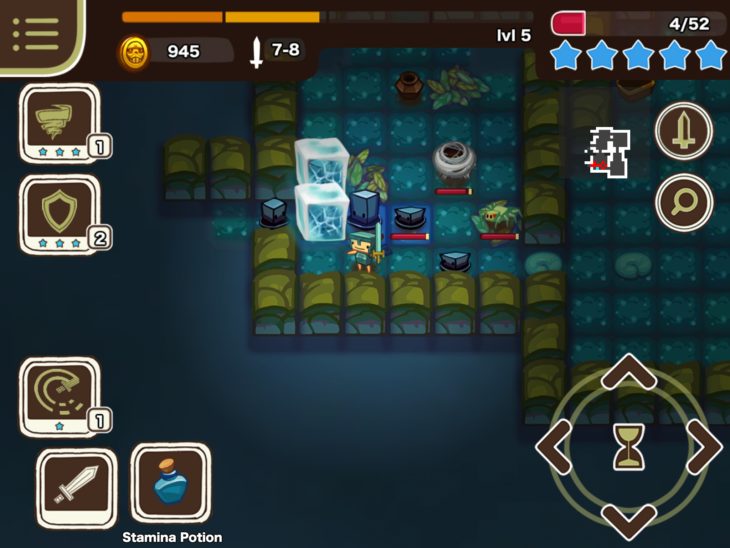 In the game, you can choose the role of thief, archer, farmer, warrior, vampire, or wizard. The goal is to visit various dungeons and to tame the creatures inside. On the road, you will find items that will help you to release yourself from the realm. The spirit called Sproggi is the king of the kingdom. Playing this game will amuse you and develop your sense of tactics. The price is $4.99. 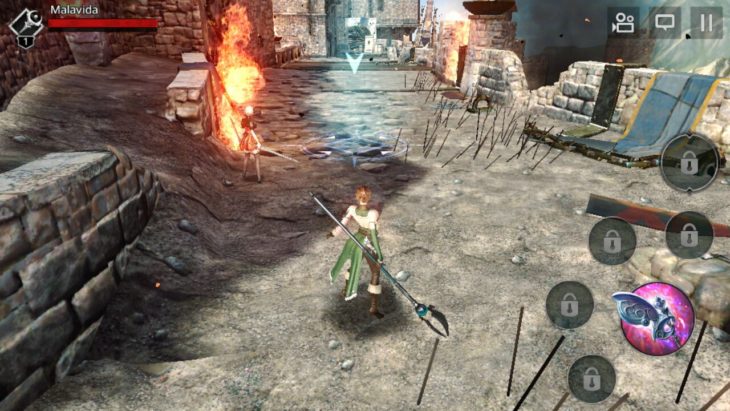 If you are a fan of slash and hack games, then you should try action RPG – Darkness Rises. The RPG comes with a lot of features such as epic boss battles, various character classes, customization of character, PvE dungeons. Besides, it has console graphics, and the sure thing is that you will love the game. Download it for free from Google Play Store. 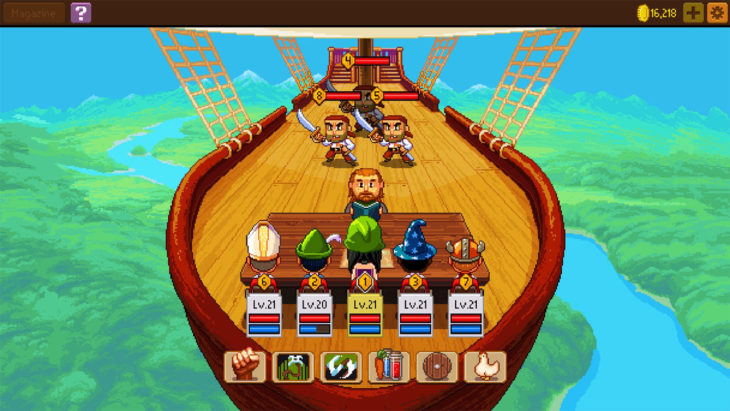 The RPG comes with retro-style graphics and characters, players and equipment are customizable. Besides, the game is full of different locations, dungeons, and side quests that will get you addicted to the game. You get a choice wheater you want to play as a game master or the party. The plot is happening in the Paperos, the fictional world and you can get Knights of Pen & Paper 2 for free. 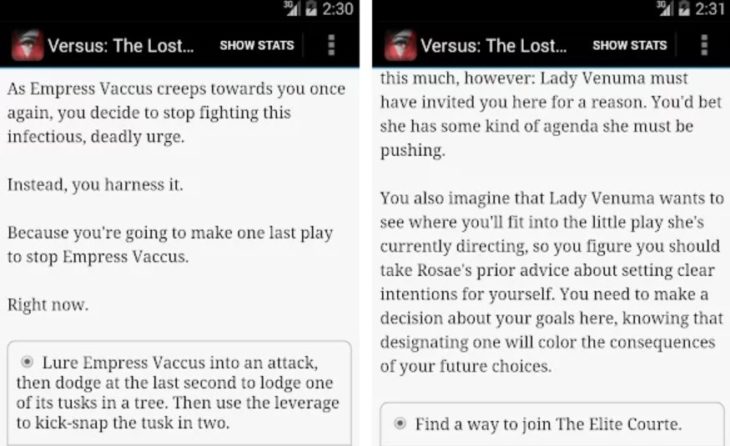 Another amazing narrative game which is based on the novel by Zachary Sergi and it has 123,000 words. Even though it doesn’t have visual or sound effects and it is entirely based on text, the RPG will entertain you. You play as an interstellar warrior who has to rely on his qualifications to survive. VERSUS: The Lost Ones comes with a reasonable price of $3.99. 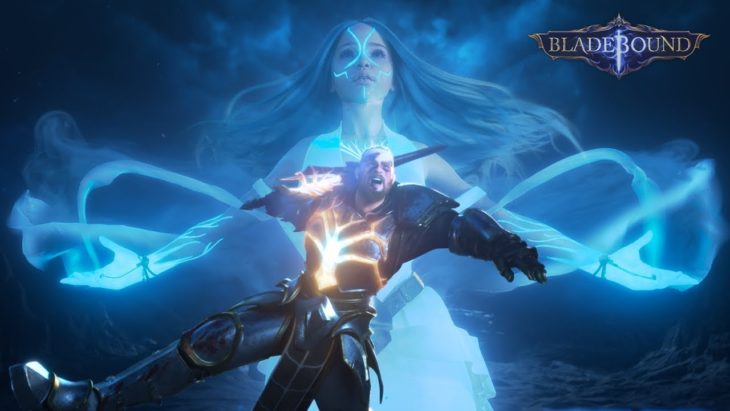 Bladebound: Immortal is an impressive action RPG in which you can use a lot of spells and attacks to clear dungeons. You play in the role of the last Bladebound who was called to save people from a disaster. Players will have the power of six elements and the choice of over 500 swords. If you love hack and slash games, you should consider the great Baldebound: Immortal. You can download the game for free. 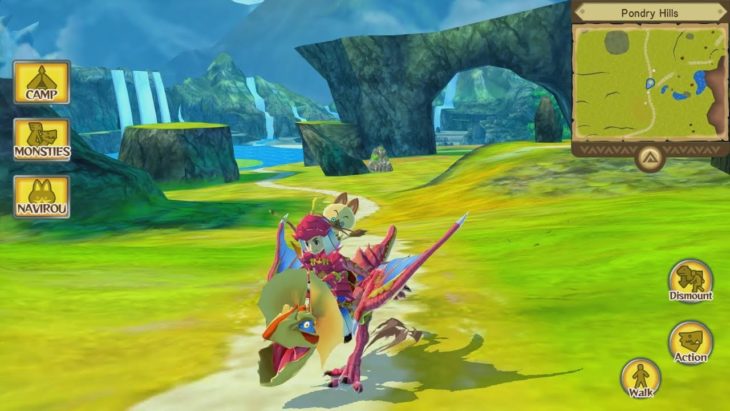 The main goal is to complete dungeons, research the world and to tame monsters which will help you in the battles which you will fight as Monster Rider. The multi-player mode is available only after some progress in the game. The price is $19.99 but is worth it. 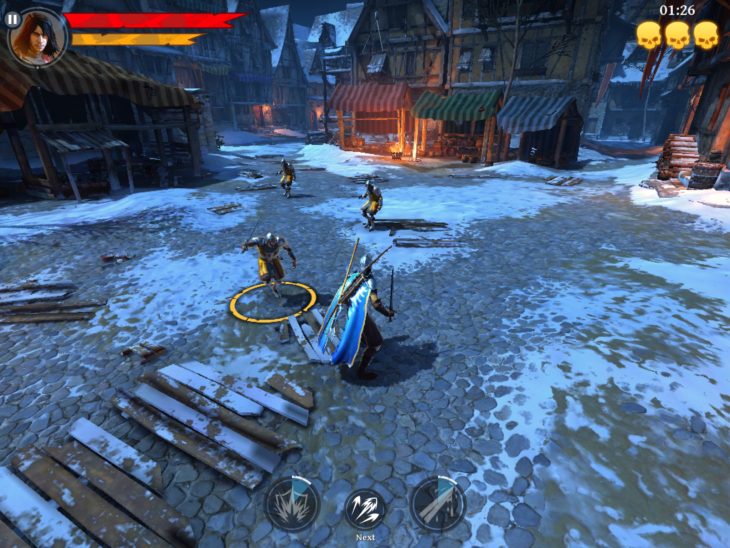 Iron Blade is an epic adventure RPG that offers you to create a character, upgrade equipment, and to prepare for the battle. As a player, you are getting ready for the demonic army that wants to destroy everything in its way. The fantastic thing is that you can test your abilities with other players in a PvP mode and also, it’s free. 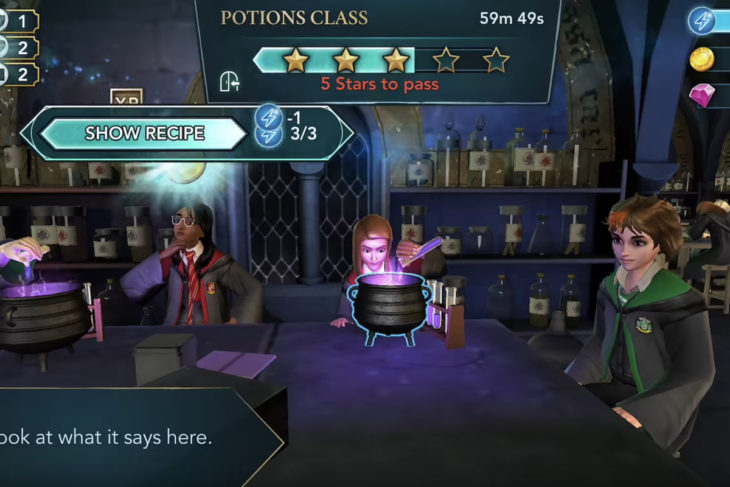 If you are a fan of Harry Potter, then you will be happy to hear that you can start education on the Hogwarts, the school of witchcraft and wizardry. You will customize your character and explore the castle. Besides, you will learn spells, duel rivals, and adopt magical creatures. Download your game for free.

Crashlands is one of the funniest games that you will find as you will play as Flux Dabes, space trucker who is forced to crash on an alien planet and to meet unknown jerk named Hewgodooko. You must survive on the earth by building bases, repairing the ship, taming monsters and of course by fighting the locals. It’s a funny, eccentric game that will entertain you. It has a reasonable price of $4.99.

17. Dragon Quest VIII: The Journey of the Cursed King 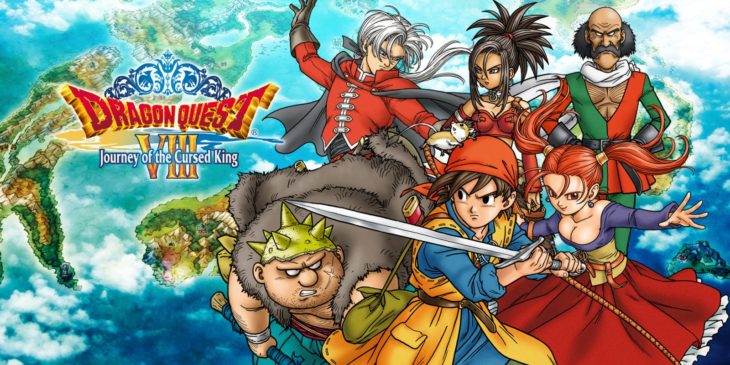 The Journey of the Cursed King is one of the favorite game in the Dragon Quest series. You play the game as the Trodain Guard who wants to return the stolen scepter. The evil Dhoulmagus has cursed the Trodain castle and turned the princess into a horse, king into a troll and ordinary people to the grass. Purchase the game and save them. The game offers 3D anime style, epic battles, and classic fantasy. It’s not cheap as it costs $19.99, but it’s worth the money.

If you are a fan of classic adventure games, then Arcane will be your choice. You will get a chance to create your adventurer from 10 classes and later on to fight the army of orcs and a lot more enemies. The fight is to restore dignity and to help your people. You have a possibility to team-up friends and player from all over the world. Besides, you can make quests which later you can share and publish. The plus is that the Arcane Quest 3 is free. 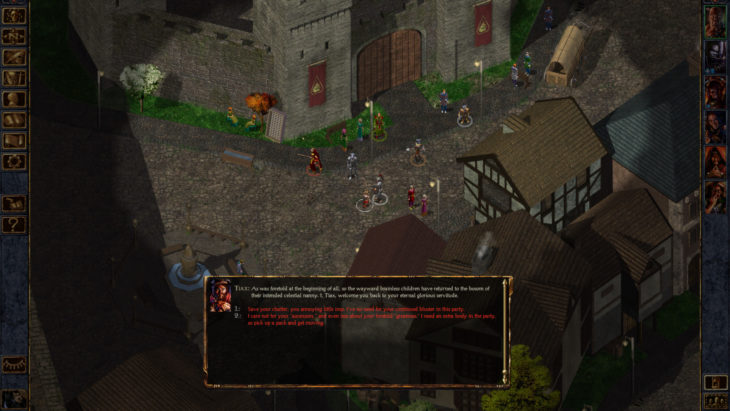 Baldur’s Gate is an impressive fantasy game that will be the right choice for all of who enjoy that kind of RPGs. The story is that you mysteriously push your castle in a world that is destroyed by the war. Choose your mythical creatures, clear dungeons, better your character, and enjoy the game. The price of Baldur’s Gate is $9.99.

The game is perfect for all the fans of Star Wars. When you play this game, you get to choose your party from nine characters and to travel on Ebon Hawk. Also, you will learn to use Force and all 40 powers. The destiny of the Galaxy is in your hands, and it’s only your choice whether you will become a hero or join the dark side. The price is $9.99.

Settling The Debates: Is Poker A Sport Or...