Take a look at some of the outfits that Meghan Markle wore during these years that look almost identical to ones that Princess Diana wore at her time. 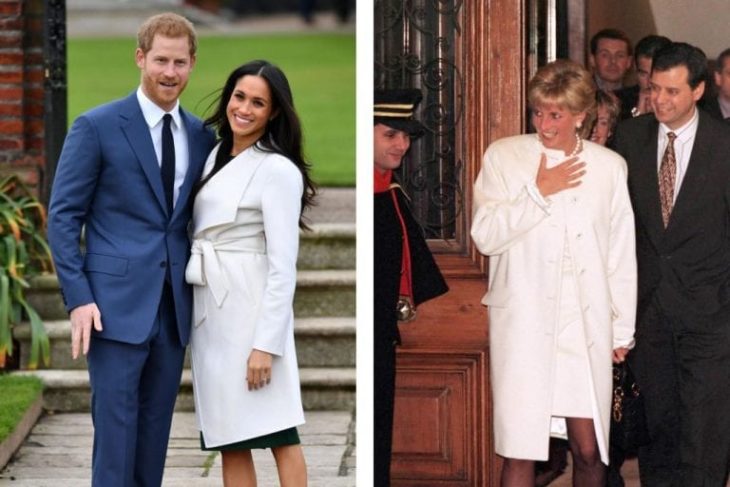 You are probably familiar with the white coat that Duchess of Sussex wore for her engagement announcement, but do you remember Princess Diana from 1996 in her white coat? 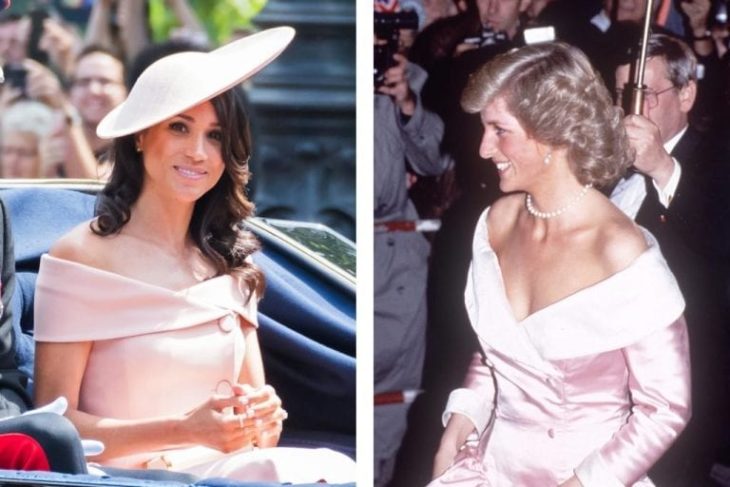 Even though her shoulders are visible, Meghan Markle didn’t break any royal rule with her dress. Her pink off the shoulder dress resembles the one Princess Diana wore in 1987. 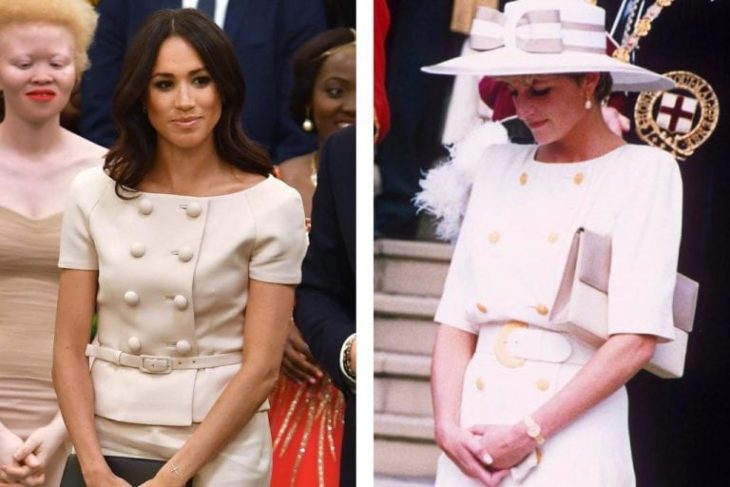 Meghan Markle chose to wear this cream-colored, buttoned-down dress with the belt at the waist, and Princess Diana wore a hat that matched her purse for her ensemble. 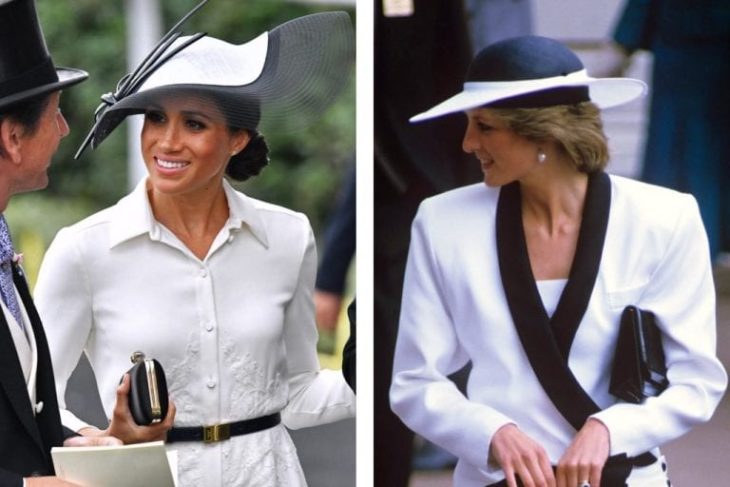 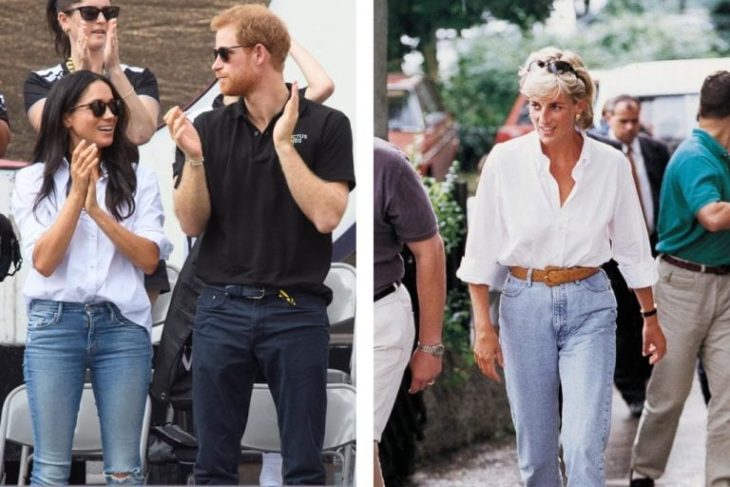 It is not a common thing for the royal family to wear jeans, but both Princess Diana and Meghan wore it with a classic white shirt. The only difference is in Princess Diana’s belt. 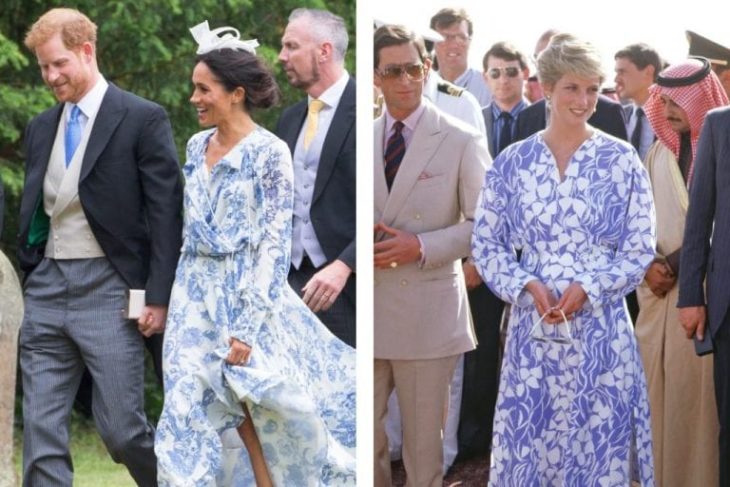 Meghan Markle had it on for the wedding of Celia McCorquodale, and Princess Diana wore it in November 1986. 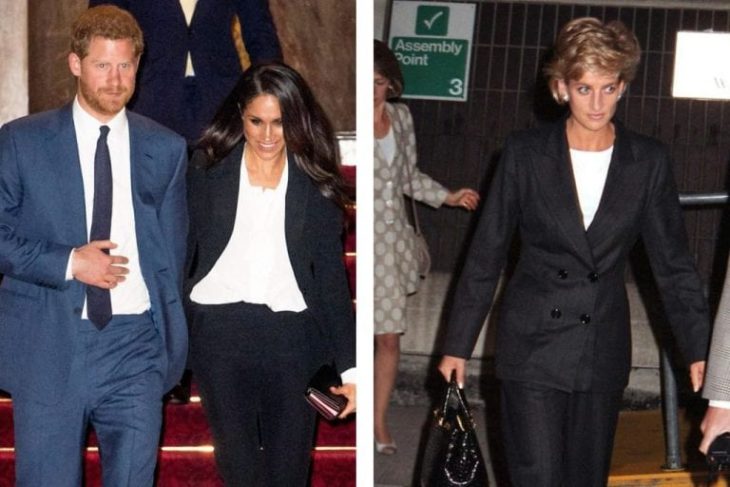 The perfect examples on how to rock a black suit are Meghan Markle and Princess Diana. 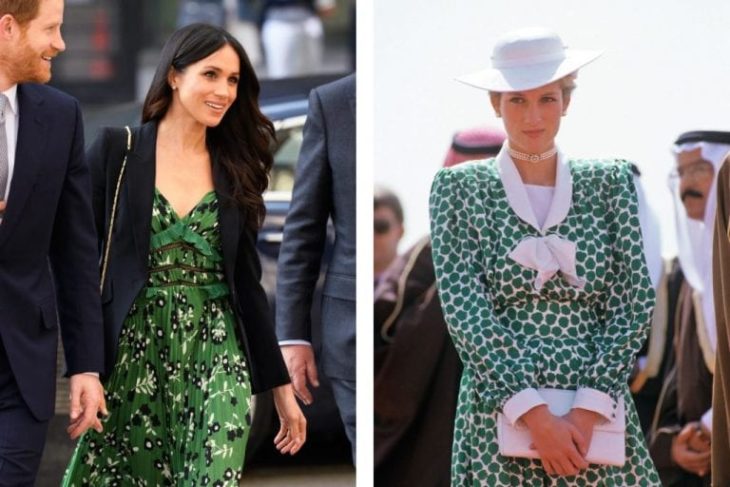 Here you can see Meghan in a green patterned dress at the Invictus Games Reception and Diana was photographed on a royal tour in Saudi Arabia in her green pattern dress. 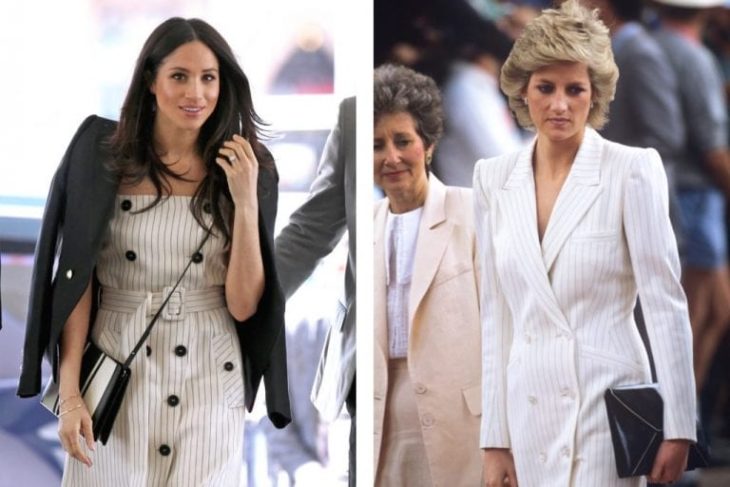 Meghan wore her stripes at the Commonwealth Youth Forum in April, and Diana had hers on a tour in Australia in 1988. 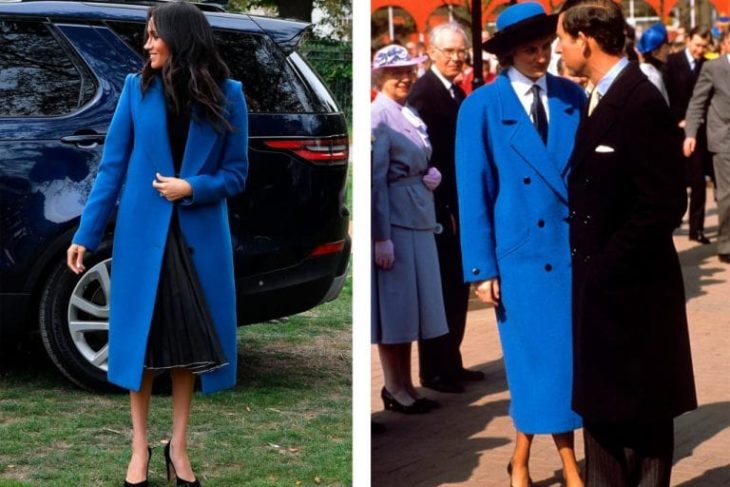 An oversized blue coat was something Princess Diana wore in 1988, and Meghan later had it in October 2018, for the release of her charity cookbook. 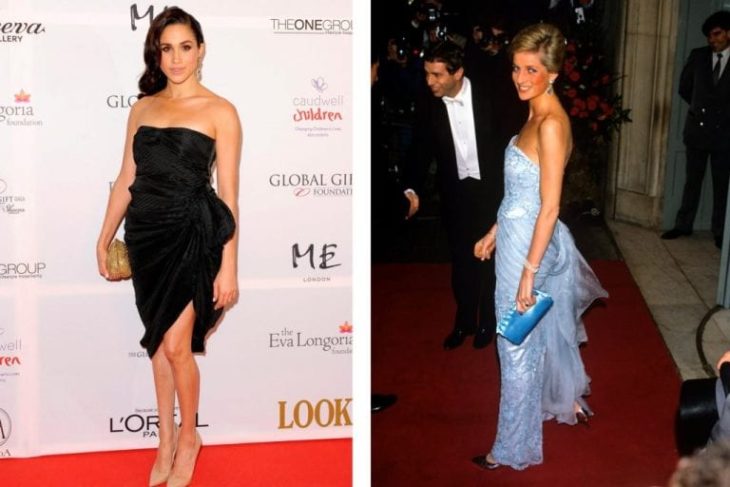 Meghan showed a little more skin in her dress in November 2013, but she wasn’t breaking any rules since she wasn’t a part of the royal family yet. Diana wore her blue strapless dress at the 1989 Centenary Ball for the Birthright Charity in London. 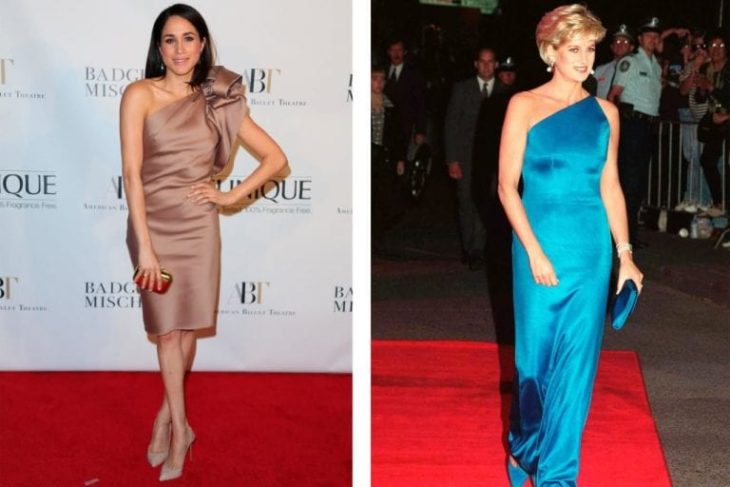 Princess Diana experimented with her look a lot, and when her marriage ended, she decided to show the world her freedom through her outfits. Here we can see the late princess wearing a blue one-shoulder dress at a 1996 charity ball in Sydney, Australia. Meghan, still not a royal family member, wore her one-shoulder dress in 2013 at the American Ballet Theater Opening Night Gala in New York City. 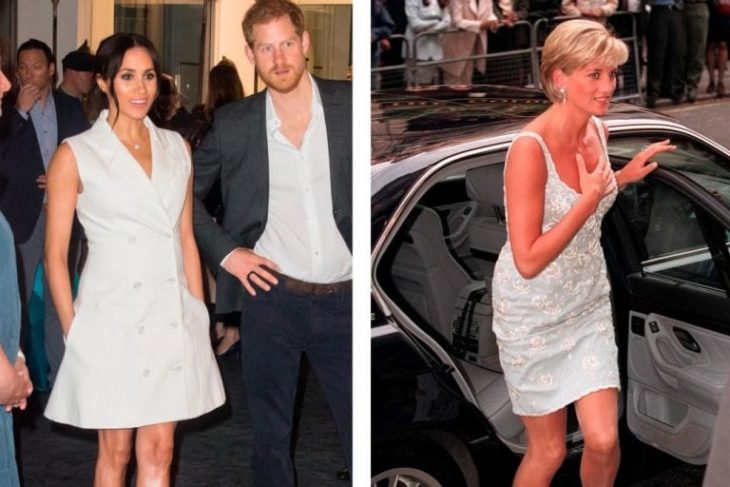 Diana wore her beautiful little white dress in 1997, and Meghan had her little dress in 2018. 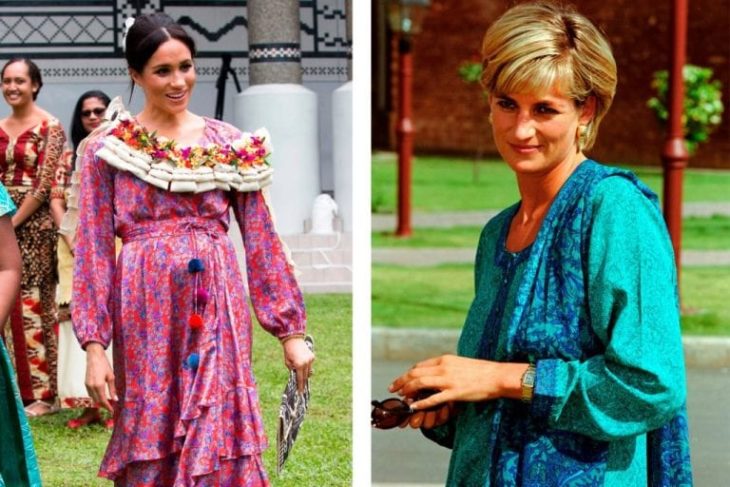 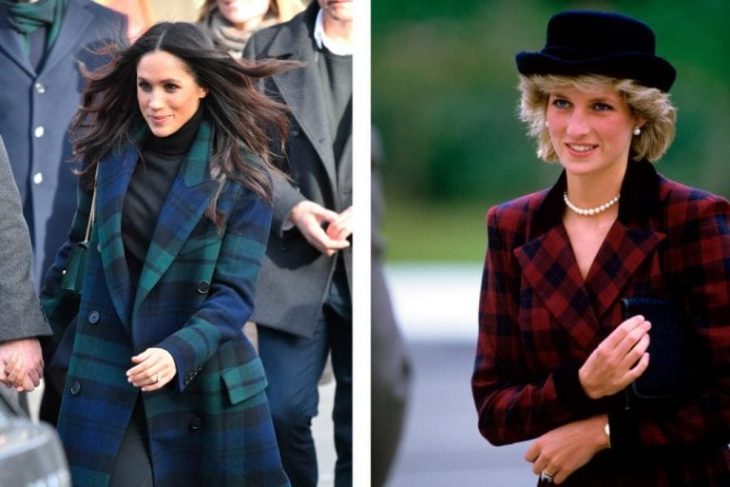 Just like dressing up in traditional clothing in Pakistan and Fiji, both Meghan and Diana had the traditional tartan design on their coats while they visited Scotland. Diana had a black and red design while on a royal tour of the Western Isles of Scotland in 1985, and Meghan was seen having blue and green pattern outside Edinburgh Castle in Scotland in February 2018. 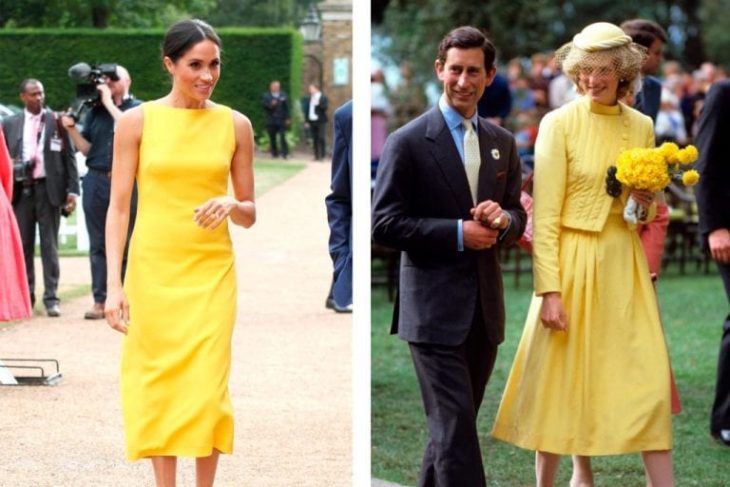 Just like Princess Diana during the early stages of her marriage in 1983, Meghan decided to wear a sunshine yellow dress at the beginning of her marriage. 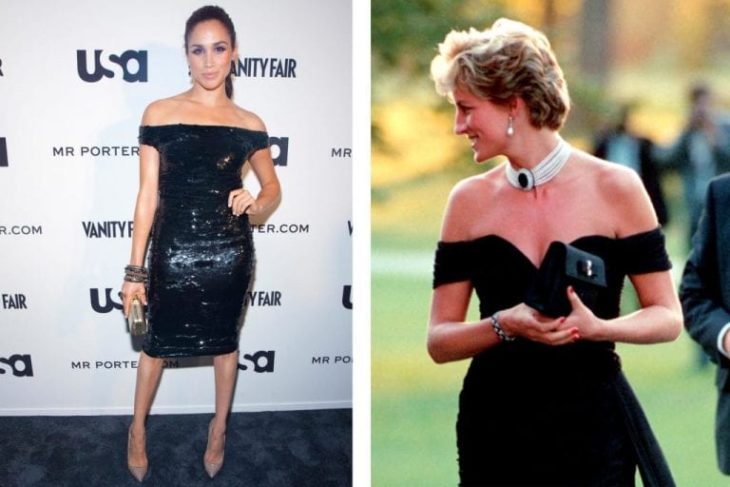 Who could forget the infamous ‘’Revenge dress’’ Princess Diana wore the night Prince Charles admitted his affair with Camilla Parker-Bowles. In case you don’t know, Princess Diana decided to wear a sexy, black dress to a Vanity Fair party in 1994. But when you are not a part of the royal family, you can wear such a dress without any hesitation, as Meghan did in 2012 to a fashion show related to her television show, Suits. 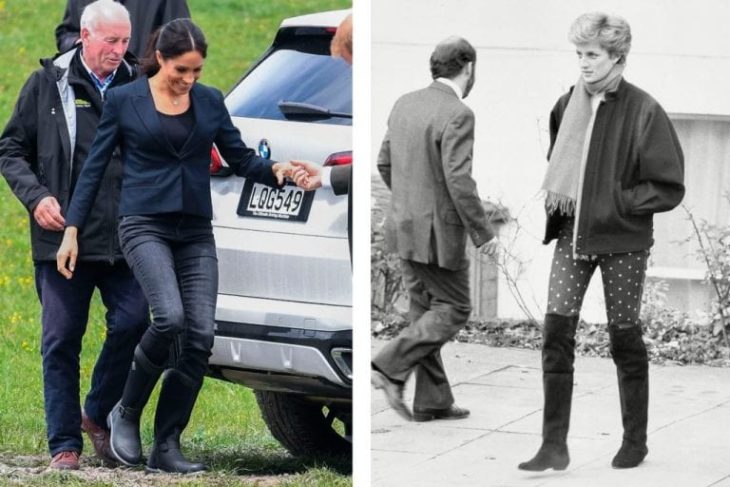 Princess Diana in her equestrian style in December 1986, and Meghan Markle in October 2018 on a tour of New Zealand. 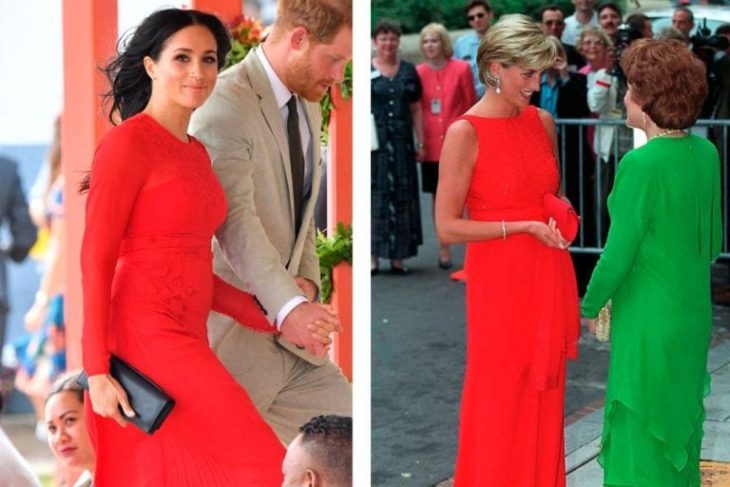 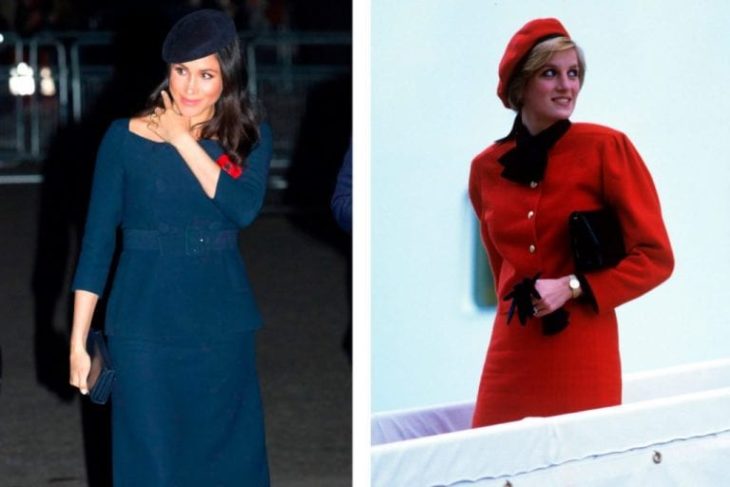 Meghan Markle wore her blue beret at a November 2018 National Service honoring the dead from World War I, and Princess Diana wore her red beret in 1984.

Health Benefits of Drinking Coffee, Or Why You Should Enjoy That Extra Cup Today