I’ve been writing relationship advice for nearly ten years now and the number-one question I get asked—by readers and friends alike—isn’t anything filthy or even fun. It is: “How come I can’t meet anyone?”

Depending on your situation, there are a variety of answers to this question, but mostly, finding someone to tongue wrestle with on a regular basis comes down to a combination of luck and timing. That said, there are things you can do to ensure that you never even come close to falling in love.

Shut-in and shut out.

Leslie is one of the most beautiful women I know. She’s tall, thin, and 1,000 percent gorgeous. But she never dates because every day after work, she comes home, eats dinner, and watches TV. Every night.

Which would be fine if she were happy, but she’s always complaining that she wants a boyfriend. Unfortunately, she’s also suffering from the delusion that if a relationship is meant to be, it’ll find her. The only way a relationship is going to “find her” is if it breaks into her apartment.

This sounds like a no-brainer, but it bears repeating: The odds of meeting someone to fall in love with increase dramatically when you step outside your door.

Another whiner is Clarice. Unlike Les, she’s a party animal, but when she goes out, it’s either with a big group of girlfriends from work or her posse of gay boyfriends. Even if the bar is knee-deep in straight, eligible bachelors, most men—unless they’re extremely inebriated—are not going to approach a girl gang. It’s simply too daunting. And honey, the only men you’re going to meet at boy bars are g-a-y. They might be ogling your boobies (breast-love is universal), but they’re not going home with you.

Try going out alone or with one or two friends at most. Engage the people around you. If you look approachable, you’re more likely to be approached.

I know this one well because it used to be my mantra. Know where that got me? Absolutely nowhere, and when I landed there, I was sitting alone. To be a successful dater, you need to deactivate your give-a-s**t. So what if you make a fool of yourself? Believe me, there are worse things to make of yourself (like a celibate wimp), and once you learn to laugh at yourself, you’ll actually find it rather liberating.

Start off slow, by smiling at that fox on the elevator. Work up to saying hello to random strangers, and soon you’ll be asking the barista for his digits.

As stunning as your inner beauty might be, if your outer beauty is cloaked in poly-blend novelty sweats, he’s probably going to keep walking.

Nobody’s saying you need to be a supermodel, but would it kill you to take a shower, run a comb through that mop, and put on a cute top? Who cares if you’re wearing Dolce & Gabbana couture or H&M sales rack chic—make an effort. Unless you’re an Olsen twin, that thrift-store mannequin look is not doing you any favors. 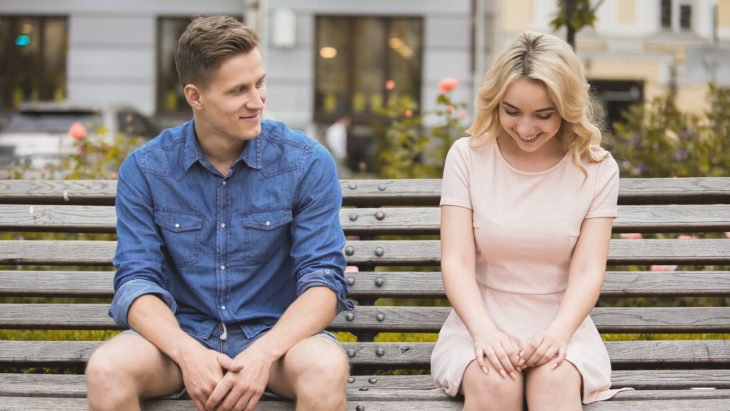 Translation: boring. It’s time to retire played-out platitudes, like “don’t date at work,” “wait for him to ask you out,” or “don’t sleep with someone for at least [insert random number here] dates.”

Life is too short to sit around pining over coworkers, waiting for some shy guy to get up the guts to call, or holding out on someone you’re absolutely cray about, just because of some arbitrary rule you read in a glossy magazine.

Falling in love isn’t science. There’s no formula for success; we’re all just a bunch of confused humans bumbling around, occasionally making connections. The important thing is to always put yourself out there. It’s like Lotto: You gotta be in it to win it.