First Time For Everything: Dating A Grandfather

Last year, I had sex with a grandfather. That sounds bad, but I didn’t know he was a grandpa until after we’d done it. Plus, he’s a good thirty years younger than my own grandfather. But still, at 53, he had two kids and a baby granddaughter, while at 32, I’m itching to give birth to my own babies. When he confessed his real age to me over lunch following our hotel-room hookup (he’d told me he was 48), I assured him that I didn’t mind.

And at first, I didn’t. Part of what attracted me to him was that he was mature. He owned his own home, had a secure job. His life wasn’t as precarious as the other guys I’d recently dated. He seemed steady and solid, thoughtful, and I liked the idea of him presiding over a family. It made me feel like he’d be protective and gentlemanly, but still hot.

It was easier to pretend the age gap didn’t matter when it was just the two of us, but the realization that, if I were to get pregnant, our child would be younger than his granddaughter, unnerved me.

Don’t think that because he was solidly “middle-aged” that he wasn’t good in bed. His hair was salt and pepper sexy, and he had a lean, muscular body. He was one of the best lovers I’ve ever had. We met at a party. He was visiting New York from England and we wound up kissing and whispering pressed up against a barstool at Marion’s. “I want to kiss you all over,” he said in his sexy accent, and I couldn’t resist going home with him.

He was staying in a crappy hotel downtown, and while I’d expected all manner of tenderness, he showed me his forceful side. “What do you like?” he asked, and wouldn’t take mumbling for an answer.

“I like to be spanked,” I whispered. Even though you can pretty much discern that within two seconds of Googling me, it still embarrasses me to tell a new lover that—and I mean “embarrass” in the hottest way possible. He was intrigued, and proceeded to deliver on my wish.

Because things had gone so well, I decided to throw caution to the wind and go visit him. I realized that the likelihood of things working out between us was slim, but he was so enticing. An older, protective, sexy man, waiting for me with a cozy apartment and open arms. Again, whereas I was used to dating guys who could barely afford their own dinner, let alone mine, his offer was enticing.

At first, his pretty, warm, library-like apartment felt like paradise. I tried to ignore the warning signs, like almost missing my flight and my brand-new suitcase not closing.

We never talked about the age difference, but it was there between us. When I introduced him to my twentysomething cousins, I felt distinctly uneasy. Was it obvious we were involved, or could he just be a friend? It was easier to pretend the age gap didn’t matter when it was just the two of us, but the realization that, if I were to get pregnant, our child would be younger than his granddaughter, unnerved me. 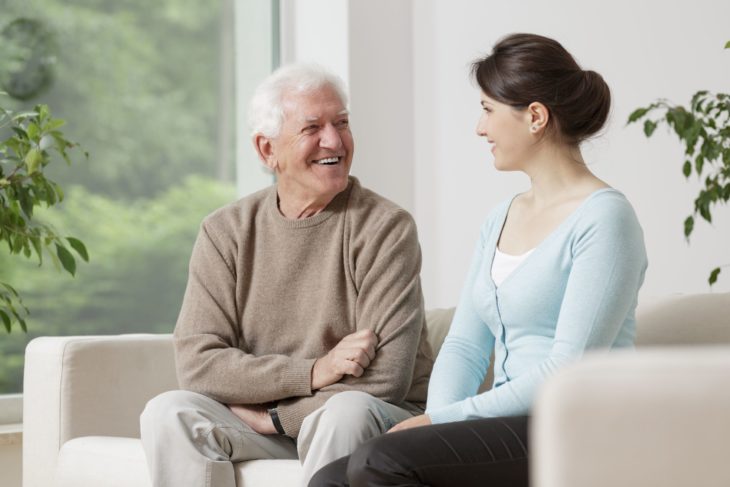 Plus, if things worked out, what would his kids think of me, someone just a few years older than they were? It made me feel a bit dirty, and not in the hot way.

I’m not opposed to age differences per se; in fact, most people I’ve dated have been at least a few years older, often over ten years older. But if someone has fifteen years on you and has never been married, that difference doesn’t matter as much. You probably have more in common in terms of the life of a single person than not; they’ve just been doing it longer. Throw in an ex-wife, kids, and grandkids, and it gets murkier. It’s not just that they come with baggage, it’s also that I don’t. I felt behind the curve, even though it’s not a competition; at 24, he’d been a dad, which made me feel like even more of an old maid than I already do.

Ultimately, it’s a push/pull kind of thing for me; knowing someone has that paternal instinct is a huge turn-on, but if they’ve already gone there, and, in his case, beyond, I feel unbalanced. Next time, no matter how hot a man is, I’ll draw the line at parenthood.

Also on The Frisky:

Dating Don’ts: 4 Reasons You Should Choose To Be Alone

Dear Wendy: The Young Hot Stud Vs. The...