An Analysis Of The “House Of Cards” Cryptic Teaser Trailer

Netflix has released a cryptic “House of Cards” season 3 trailer, featuring President and Mrs. Underwood as they come together from separate places in the early hours of the morning. Here’s a shot-by-shot synopsis of the 2:36 trailer, titled “The Full Quartet”:

WHAT DOES IT ALL MEAN? 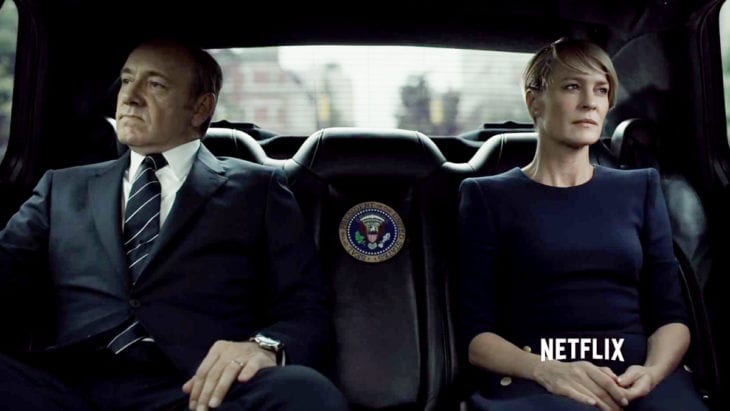 So: Claire is arriving in Washington D.C. from the Midwest time zone (Zulu/UTC is the same as Greenwich mean time, so I’m not sure if it’s significant). It’s midnight, Eastern time. The clock resetting to zero over the word “PRESIDENT” would seem to mean that Frank is in “the zero hour,” meaning that a strike is about to begin, or a crucial decision must be made. Perhaps Claire — who is an hour behind him (“LOCAL”), is not susceptible to the same danger — and her being behind him is echoed at the end of the trailer, when she follows him out of frame.

Perhaps the portraits have some insight: The couch under Kennedy’s portrait is the same design as the couch on which Claire and Frank sit in another room of the White House. In Kennedy’s portrait, he is portrayed as being in deep thought, with downcast eyes; it bears noting, as well, that his portrait was painted posthumously. But the shot preceding that put what looks to be Ulysses S. Grant’s portrait center-frame: Grant led the Union Army in the Civil War, oversaw reconstruction, instituted the Gold Standard, notably defeated the Ku Klux Klan in the South, and enfranchised southern Blacks — but in his second term, he saw setbacks as conservative southern Whites instituted terror campaigns against their Black neighbors. He and his cabinet were also subjected to federal corruption investigations, which seems apropos in the context of Frank Underwood. So: Is Frank’s corruption finally catching up with him?

It’s interesting that we see so little of Frank, and so much of Claire. I think the image of her causing the American flag to sway might carry some symbolism: She is making the country move. When she ascends the staircase, the portraits of Washington and Lincoln are only made distinguishable after she has passed them, or perhaps eclipsed them. Is Claire becoming the Underwood who holds more power? Is Frank, symbolized by Reagan, Kennedy, and Grant, becoming less foundational to the presidency than Claire, who’s symbolized by Washington and Lincoln? It seems to be a play on the trope that “behind every great man is a great woman.”

But then, what about the shoes? Gosh, I do not know enough about the symbolism of feet or shoes to decipher what seems to be this crucial closing shot. Maybe it’s just a reiteration of Claire’s influence: High heels are distinctly feminine, distinctly associated with women, so maybe it’s just meant to cement the idea in our minds that Claire is going to play a much larger role in Frank’s career than she has in the last two seasons. The whole trailer makes Frank look like a shut-in and Claire look ambitious — she’s on Air Force One, shecalls him. And she’s able to undress only around Frank, to leave her feet naked, to be who she is.

Welp, that’s my postulation about the general direction in which the season is going to head. I still don’t know about the title — “The Full Quartet” — and I had thought that there were only four characters shown in the trailer, but there are, in fact, five. So who knows? If you have any clue, discuss it in the comments!