I’ve been dyeing my hair since I was 13, when a hairdresser at an upscale salon informed me that I would have to dye my hair forever because my natural color? the most neutral of dark browns ? was just that shitty. (Another stylist at the same salon later told my mother to imagine the haircut she wanted, which she had seen on a model in a magazine, “on an ugly face,” so take it with a grain of salt.) I don’t brush (wide-tooth comb!), shampoo every day (twice a week!), or heat style my mid back-length hair, but I still noticed that I was accumulating dry, crunchy ends, which worsened every time I hit the salon for a good two-hour color dose.

Since my mission these days is the longest, strongest, shiniest, most Middleton-esque cascades possible, and also maybe not getting cancer, I started feeling out my options for possible alternatives to traditional hair dye. My quest led me, as many of my quests do, straight to LUSH. Their solid blocks of henna pigment intrigued me for two reasons? one, the formula not only colors but deeply conditions and strengthens the hair while doing so; two, the concoction is called Caca Brun Mama, which basically means Poop Brown Mom. Was I really going to put something called Poop Brown Mom all over my hair, and leave it there for six hours? Yes. Yes I was.

Price/Availability: At $25.95 for 11.4 oz, the price may seem steep to those who are used to coloring with an $8 box from CVS. On the other hand, if you’re more of the $250 salon visit type, this is cheap as hell. Considering you can get anywhere from two to four treatments out of the bar depending on your hair length/thickness, it’s a pretty good deal however you spin it. It’s available online at LUSH and in LUSH stores? check here for the Store Locator. I chose the Caca Brun, which imparts a cool-toned brown, but there are three other colors available.

Packaging: It comes neatly tied up in a plastic bag, and the 11.4 oz bar is separated into six squares. If you have shorter or very fine hair, you may be able to get away with using one or two bars. I have fairly long, super-fine hair, but I have a lot of it, so I used three squares. I used the same on my mom, who has fine shoulder-length hair, with some left over. It’s better to make more than you think you need than to have to make more while you’re doing your hair.

Formula: It smells weird, like old plants and maybe a little bit of hash, but it’s significantly more pleasant than the chemical smell of other hair dyes. Once it’s melted and applied, it hardens to a solid mass, so you don’t have to clip it up or anything if you have long hair, just kind of mush it all together and twist your hair up into a shape and push it down. It’ll stay. The entire process is very involved, as in, if you don’t have five or more hours to stay inside the house doing whatever, DO NOT BEGIN. However, if you are really looking to make a healthier, more conscious lifestyle change to how you color your hair, there is nothing better than this particular formula. There are specific instructions, which you can find on the website under How To Use. It sounds stressful and difficult, but if I can do it, anyone can. Really. I’m pretty useless. 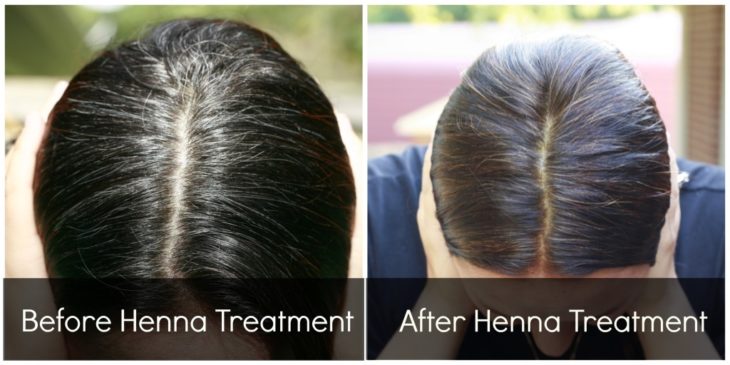 Results: If you haven’t been frightened off by the lengthy, involved process, this stuff rules. I was worried it wasn’t going to wash out because it had dried so stiffly into my hair (I left it in for six hours), but once I got under the warm water in the shower it softened and actually came out pretty easily. I was expecting a total mess, but unless you let it sit on your floor or curtain or bathtub for a long time, it doesn’t even stain. You don’t have to condition to excess after you wash it out like you do with other hair dye; your hair will be super soft and feel thicker and healthier. For real! I didn’t shampoo it out immediately after to keep the color in? I rinsed with conditioner and let it air dry.

My hair is significantly darker, but not black, and the lighter, redder areas of my hair, the ones I was trying to subdue, became a soft, muted cool brown. The brassiness is gone. Like I said, I also did this on my mom the next day. She had gotten her hair dyed professionally and was unhappy (like, bitching continuously for a week) about how red they had made her hair. She washed it out after two hours, and her hair was only slightly darker (nowhere near “dark” brown) but the brassiness had been completely toned out. And yes, MOM, it covers greys.

Overall: A small warning/qualm: hair colored with henna should not be chemically dyed for a while after using the henna, especially for those who highlight or bleach their hair. But because I’m looking more to not dye my hair ever again and keep it as natural as possible, I love it. My hair looks and feels amazing, and the results are 100% worth the preparation. Since I’ve done it twice and experienced for myself that it wasn’t as annoying to get together as I thought it would be (of course, because I would never have volunteered to do it on my mom if it had been a bitch to do), I’ll have no problem doing it again. I highly, highly recommend this henna, especially for those who already dye their hair and are either sick of the damage or the chemicals like I was and are ready to quit the chemical process altogether. It smells totally fucking weird, and you will look crazy while doing it, but it’s soooooo worth it.

22 Sexy Lingerie Models Who Are Missing Their Vaginas

Working Towards A Sustainable Future For The Fragrance...