Understanding how to properly greet a woman is apparently a fraught issue for many dudes, but I didn’t realize just how fraught it was until I saw this video. A normal, conventionally attractive comedian named Robbie Sherrard takes on the eternal question of how to properly address a woman. He even made this befuddling chart which took me one large iced coffee and about 10 minutes to decipher. Here’s Fusion’s version, which is clearer in execution only.

Is this where we are? Is the state of interpersonal communications such that people feel the need to create what is obviously a “joke” on how to properly greet a woman out in the wild?

Greeting human beings in the world is something that is easy. You see a person you know, and depending on how you two know each other, you greet using the same amount of physical contact (or not!) that you have previously established. If it’s a friend that you’ve known since you were eight, all bets are off. A hug? A cheek kiss? An elaborate secret handshake that you came up with one day in the treehouse that never fails to make you collapse in peals of contented laughter? Whatever you two have mutually established is just fine. 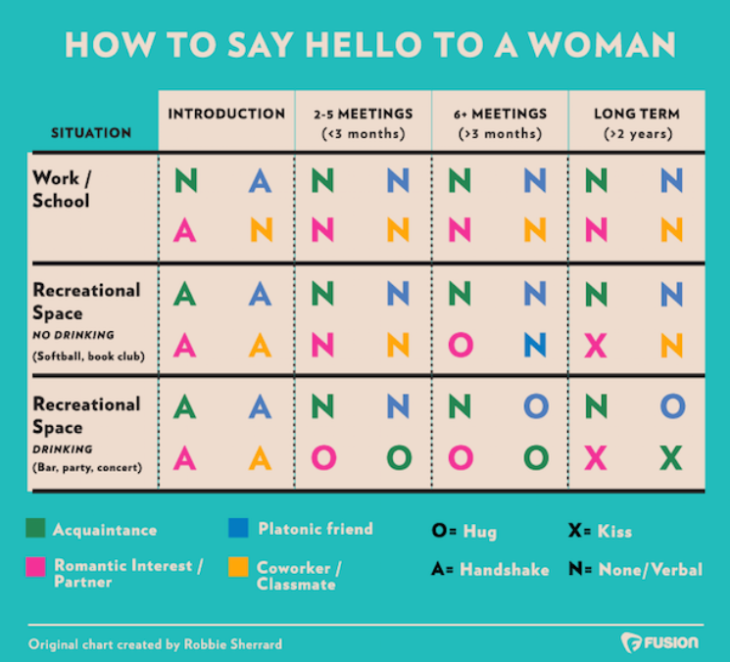 The same goes for every single person in your life, really. You greet each other how you ALWAYS greet each other without needing to frantically flip through your mental files, looking in vain for the chart that a comedian in a plaid shirt put together for you.

I refuse to believe that humanity has devolved to the point where we are incapable of reading body language. Read the situation. See what the deal is. Is this a new person at your office who happens to be a woman, and is on their first-day-at-work tour? Don’t be that fucking weirdo who stands up and shakes their hand, because you are probably the tenth person they’ve met in as many minutes, and they certainly will forget your name almost as soon as you can say it. If it’s your new boss, a handshake is fine. Do they extend their hand towards you? Shake the hand. It’s going to be fine.

Introductions are simple. There are a lot of dudes out there who are probably kinda clueless on how to approach a shiny, pretty lady sitting at a coffee shop quietly reading, but here’s a suggestion: if you don’t know her, like, she is a complete and total stranger, maybe don’t approach her. If she’s at a coffee shop reading a book, my guess is that she wants to be left alone. She’s trying to enjoy her Sunday. If you can manufacture a way to come up and holler that’s not creepy, weird or intrusive, be my guest. 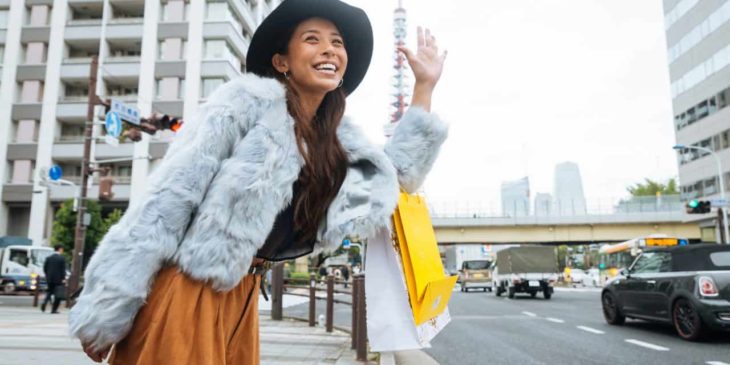 The takeaway here is that women are not a monolithic concept, or a particularly vexing equation to be solved. If you go around treating every single woman you meet in the same way, you’re going to come off as a weird robot that lacks empathy. The chart here is a solid guideline, I guess, but a good rule of thumb is to let the woman (or really whoever) you’re interacting with set the tone and tenor of your interaction if you’re not clear on what they would find appropriate. If you do end up going in for, say, a hug, PAY ATTENTION to their reaction — if the person hugs back with the warmth of a dead fish, guess what? They didn’t like that. Next time you see them, scale it back. Let them come to you. Just be self-aware and you won’t go wrong.

Don’t Pay For These 8 Things With Your Credit Card Ever!