Logan Paul, a popular name in the entertainment industry. He is known as an American actor and got his popularity from being an internet influencer. He started his career by making videos and sharing it on the former video sharing platform “Vine”. After the shutdown of this platform, he then moved to Facebook and YouTube and continue sharing content. Logan Paul has worked in several Hollywood movies as well including “The Thinning”, “Baywatch”, “Where’s the Money”, “Airplane Mode”, etc. But his main popularity came from being a YouTuber!

April 1 zodiac personality Logan Paul is not new to controversies but his latest statement brought him to limelight when the YouTube star expressed his thoughts on leaving the largest video sharing platform for good.

Paul shared a long text post on his Instagram profile on March 23, 2019, where he seemed to be unsatisfied with his YouTube career and wants to take a break. He thinks that being a YouTuber will never provide him with the longevity of stardom that he is searching for and he want to do more with his life than being a YouTuber. 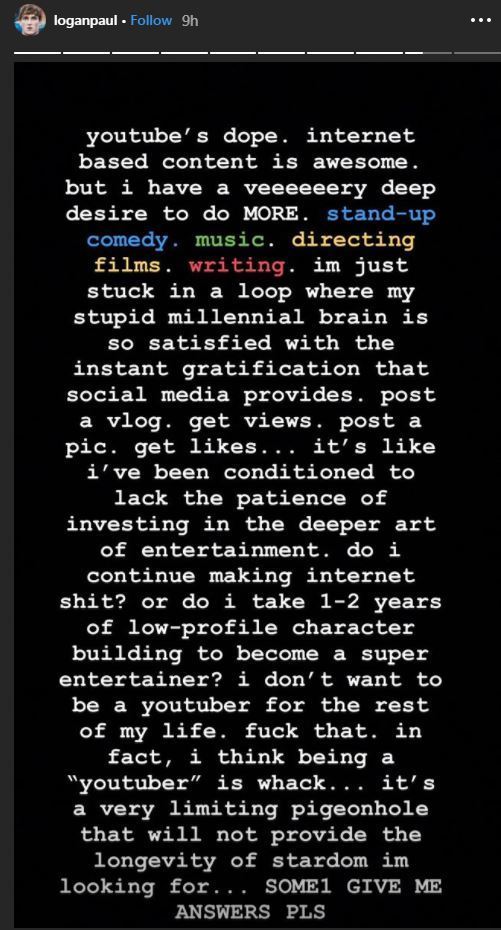 Logan Paul started the text by saying that YouTube is dope and then moving on to say that being a YouTuber is whack!!!

His words are quoted below:

“YouTube’s dope. Internet-based content is awesome. But I have a very deep desire to do more. Stand-up comedy, music, directing films, writing. I am just stuck in a loop where my stupid millennial brain is so satisfied with the instant gratification that social media provides. Post a vlog, get views, post a pic, get likes… it’s like I have been conditioned to lack the patience of investing in the deeper art of entertainment. Do I continue making internet shit? Or do I take 1-2 of low-profile character building to become a super entertainer? I don’t want to be a YouTuber for the rest of my life. Fuck that. I think being a “YouTuber” is whack… it’s a very limiting pigeonhole that will not provide the longevity of stardom I am looking for… some1 give me answers pls.”

He teased in his post of taking a year or two of break from YouTube to focus on his career to achieve his goals which he seems to be unable to achieve from being a YouTuber.

Paul has been in controversy since his message as he has been receiving ample backlash from celebrities and commoners alike. Even the Drama Alert host Daniel KEEMSTAR Keem has uploaded a message for Logan Paul on his Twitter saying “Dude, what is wrong with you, bro? This mainstream Hollywood stuff… It’s thousands of people getting together to create a piece of work. ….YouTube is democratic. The people are picking the winners and losers.”

Some users claimed that Paul’s message was a reaction to the sudden decline of his YouTube channel, although he has been gaining a steady amount of subscribers in the past few days.

One commoner commented on Twitter: “Every YouTuber whose channel is going downhill says, ‘I’m aShAmEd tO bE a yOuTuBeR,’ nothing new!”

Whether or not he quit YouTube is a mystery yet to be solved though!

What Is the Most Effective Method To Minimise Risk Forex Trading and Save Money?

Dog breeds that will melt your heart