Do Something New: Beekeeping

I don’t know when or where exactly I became terrified of bees, but I think I got a clue during a beekeeping class this past Saturday, when I texted my mom and sisters a picture of a hive. One sister responded “That’s terrifying,” and the other just said “WTF.” So I think this must be a family thing, like my former aversion to fish, or the fact that we’re all neurotically tidy.

If you’d asked me a month ago what the scariest thing in the world was, I would’ve said “Bugs,” and then if you asked me to rank the scariest bugs, I’d say centipedes, ladybugs, and bees, in that order. (Spiders are disgusting, but they get an exemption because they eat other bugs.) Centipedes are gross, the ladybug thing has to do with ladybug infestations and resulting piles of ladybug carcasses in the attic of my childhood home, and bees sting, pure and simple. When I was a kid, I thought I’d been attacked by bees, once, but they turned out to be yellowjackets, not bees. Nonetheless, my fear of bees remained.

But about a year ago, I started getting curious about bees. One of my social networking contacts runs an apiary in Oregon and was hit by massive bee deaths last August. I think the thing that did it for me is that she was devastated the way she would have been if her dog had died – she felt personally attached to the bees. I didn’t understand that, what with my fear, but I respected it, and it got me really curious about why bees and colony collapse have been in the news so much in the last several years 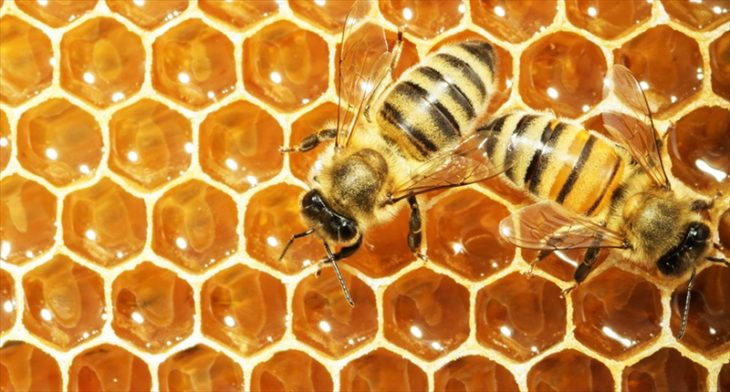 The answer to that is that since 2006, beekeepers in America (and various other parts of the world) have been losing 30-90% of their hives every year, and the sort of spooky thing about Colony Collapse Disorder (CCD) is that when it happens, it’s not just that, say, the bees didn’t survive the winter. If that’d been the case, there would be dead bees in the hive. Instead, the hive has a live queen but no other bees but brood (young bees, not quite workers yet). They just disappear. We haven’t figured out why this is happening, yet, but the Department of Agriculture thinks that it might be a perfect storm of new bee diseases, plus overuse of pesticides. And while some loss is to be expected, even 30% is high.

The problem is that honey bees aren’t just honey producers, they’re pollinators, and there’s a whole pollination industry that depends on them. Bees are shipped cross-country to pollinate crops, for example. While we do have other pollinators in America, a continued loss of, say 33% of honey bees per year would endanger our food supply in an already economically iffy time (right after a recession and with student and various other debts looming, not to mention the drought in California that’s quickly cutting away at our harvests) that’s rife with social tensions, and with 23.5 million Americans already living in food deserts.

We need bees, in other words. And we’re nine years into the CCD epidemic. The good news is that we are starting to pay attention: President Obama, for example, is making millions of acres of federal land more bee-friendly, landscaping to fit their needs in areas along highways and in housing projects, and reconsidering heavy use of pesticides. Morgan Freeman just made the news recently (although bee enthusiasts have known for some time) for turning his 124-acre Mississippi ranch into a bee sanctuary with 26 hives, saying that he wanted to be part of the “concerted effort to bring bees back onto the planet.”

So what’s my part? – is the question I’ve been asking myself. Well, I have a voice and venue, and as long as I’m trying new things, I might as well try to cozy up to bees. I got in touch with the Chicago Honey Co-Op, and they penciled me in for their June intro-to-beekeeping class. 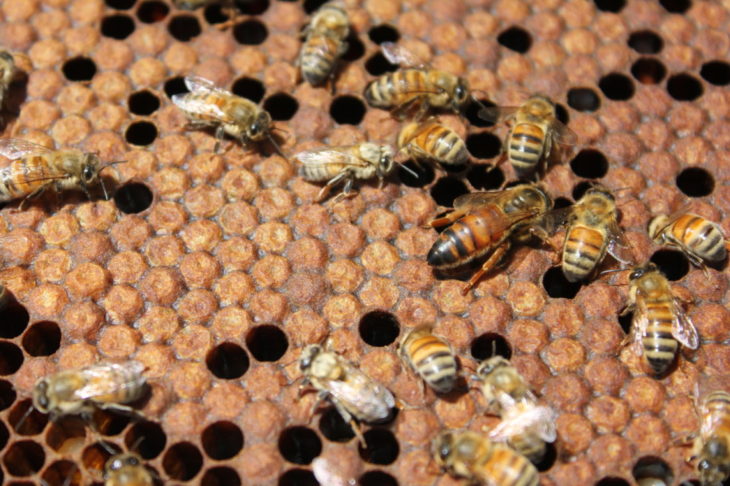 The first thing I had to do was read a book on beekeeping so that I had some idea of what I was doing. The only one I could find nearby turned out to be an extremely thorough instructional manual on beekeeping from the late head of Cornell’s beekeeping program. It drove home the point that bees are 1) extremely good at doing their jobs but as a result 2) really not intelligent enough to even care about humans unless they pose a direct threat to the hive. Bees are a self-sustaining machine, being able to build and maintain their own homes, support their own social hierarchy, feed themselves and each other, and defend the hive if necessary. But they’re machines. I’ve been living in the fantasy that they’ve got it out for me and want to sting me, but they really just want to gather pollen and nectar and create wax from these weird little glands on their undersides, and patch cells in the hive, and make honey so that they don’t starve during the winter, and make sure that the eggs turn into larvae and hatch and create more bees, and then in the course of six weeks in the summer, or six months in the winter, they die. That’s it.

The class dove in right away, the instructors – Michael and Sydney – having us stand about 10 feet in front of the hives from the get-go. Bees have a flight pattern that takes them out from the hive and up 15 feet in the air, so we were basically in their blind spot for about 45 minutes, while Michael demonstrated how to open a hive safely: Smoke it, pry open the lid (it will be stuck to the hive with propolis, which is gathered from tree sap and which people call “bee glue”), crack it open, smoke the hive (smoke dulls bees’ senses and makes them less aggressive). Set the lid to the side, pry up the top cover, smoke the hive again. Set the top cover aside, then pry apart the frames of the hive on which the bees build comb to live in, and to inspect a frame, just lift it very, very slowly and carefully from the nest. After he was done demonstrating on an empty demonstration box, we were shown how to fire up a bee smoker, and then it was on to the actual work of inspecting the hive, looking for signs that it’s healthy, especially a live queen, eggs and larvae, and bees acting, well, normally.

So yeah: I opened a hive with a partner (or so). I got alllllll up in a beehive. I took out frames of comb that were covered with bees, looking for tiny little eggs in the cells. I wasn’t as adventurous as some of my classmates, but the point is that I held a frame that was heavy with honey and bees and to my true surprise, despite the fact that I was terrified and I wasn’t wearing one of those big heavy suits but instead just some jeans and a long-sleeved shirt with gloves and a veil the Co-Op provided, I never got stung. My fears were unfounded. 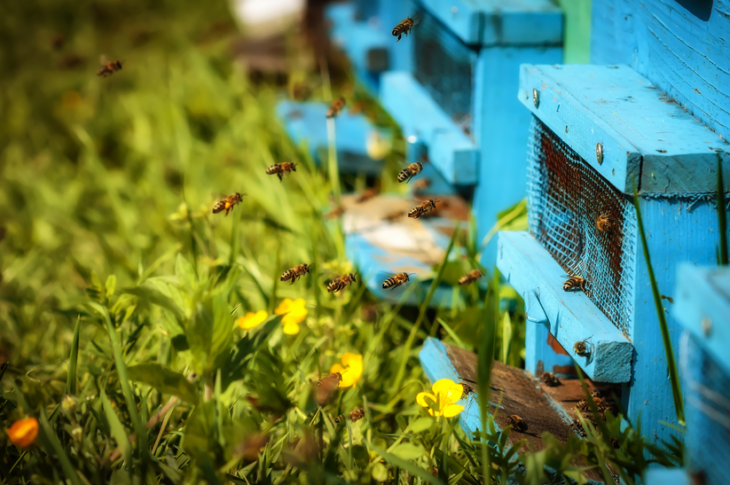 If you want to start beekeeping, there’s a lot to learn, and you really have to learn it, because if you’re going to “domesticate” hives for your own ends (i.e. selling honey or renting bees as pollinators for profit), you have to know what to look for in a hive and how to solve problems when they arise. It’s a touch-and-go thing, sometimes, and you can wind up losing a hive if you make the wrong decision. It also takes time to turn a profit if you’re looking to produce honey and you’re building a hive from scratch – it’ll be a year before the bees are making surplus honey, as in more honey than they need to survive the year.

But it seems worth it. The world could use more bees, and they’re one of those things that for whatever reason – obsessive hygiene? Horror movies? Urbanization? – we as humans have distanced ourselves from. We don’t really get them; we don’t know much about them or what they do or how to predict their actions. But we really need them.

If you’re down with the idea of more bees existing in the world but you don’t personally want to run an apiary, the good news is that you can still contribute to the effort to repopulate bees. You can donate to local beekeeping programs like the Chicago Honey Co-Op, bee conservation organizations like The Honeybee Conservancy, or you can donate bees to people who do want to keep hives through Heifer and Oxfam and do the double-whammy of helping people start their own businesses and become more economically stable while repopulating bees – which is what I’m planning to do. I’m glad I know that bees are not scary and are in fact really resourceful, hardworking little creatures, but I’m even more glad that I can help to save them while staying at a comfortable and very respectful distance.

Dealbreaker: The Third Wheel Hated Me

My 9 Favorite Relationships In Pop Culture

Do Something New: Write A Prisoner