5 Free Streaming Services Will Want to Make You Cancel Netflix

Netflix, for many reasons, has become the king of online media streaming. It is a great content provider that gives you a good selection of movies and TV shows.

But Netflix is good for what they have. Lately, there have been many complaints from users criticizing Netflix from having outdated geo-tailored content. First, they don’t have fresh content, and if they do, it will be tailored to your geographical region.

To turn this around, you can try other types of streaming services. First, they are free, and second, they allow you to build your own customized personal streaming service. Being free, of course, they’ll not provide the same quality (and quantity) in terms of content as Netflix does.

But there is a crucial difference.

Free streaming sites are amazing, but again they don’t give you control over your own content. Streaming services, on the other hand, such as Plex, Emby, and Kodi, are awesome for content that you already have— your movie collection that is sitting in an old hard drive or your media collection stored on cloud-based storage. You’ll be able to create Netflix-like services where you’ll have total command of the media content. 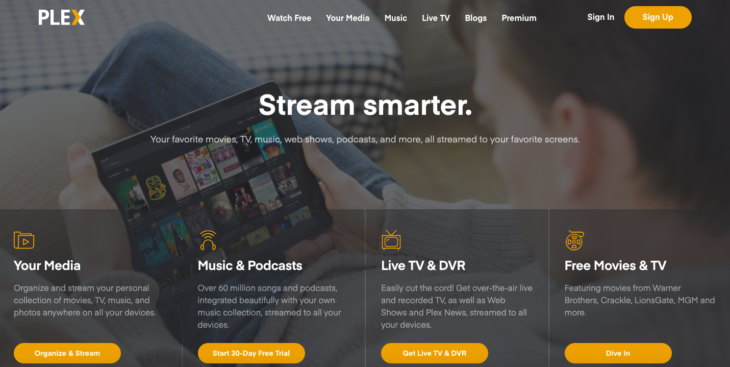 Plex is a popular free client-server media player system. It provides free, ad-supported streaming of movies, TV shows, and music. Plex is not an on-demand streaming service such as Netflix or HBO; it also does not provide live TV streams such as Youtube.

So, what can you do with Plex?

The Plex Media Server (PMS) is the core element of the Plex system; it organizes your media (either local or remote) and lets your player access and stream all the content. The PMS desktop software is supported by Windows, macOS, and Linux operating systems. And you can also invite friends to stream media content from your PMS.

The Plex media client is the one accessing and streaming the content. Officially there are many clients (software and hardware) supported, from web browsers, mobile devices, smart TVs, game consoles, streaming boxes, etc. There are also third-party alternatives, so Plex clients are almost universally supported.

What makes Plex stand out?

Plex is popular for its fantastic transcoding capabilities, making it one of the best for streaming to multiple devices. Plex is also well known for its amazing library management. It will automatically organize and label all your content, and you can also grow your library of video streaming content online with third-party Plex Seedbox services, from providers such as Rapidseedbox. 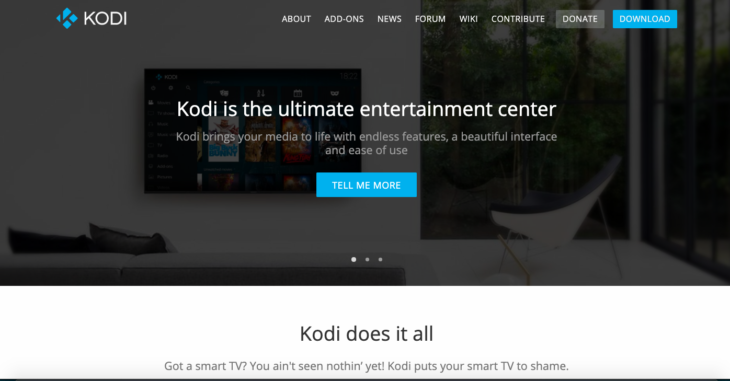 Kodi (formerly known as XBMC) is a free, open-source, and cross-platform media player system. It began around 2002 as an independently developed media player for the Xbox, game console, known as Xbox Media Center (XBMC). The software allowed Xbox users to modify the game console by adding additional applications. Plex is a derivative from the XBMC original code.

Kodi is very popular for its flexibility and highly customizable platform. It allows you to change its appearance and extend its functionality via plug-ins (commonly known as Kodi add-ons). You can access online streaming services like Youtube, Spotify, and more, and play in devices with no access to streaming.

Kodi is similar to Plex because it allows you to stream media content online, like movies, music, podcasts from remote Internet servers. Still, it also allows you to playback media stored locally.

What makes Kodi stand out?

Amazing customizability. You can customize the Kodi application with an extensive library of available Kodi add-ons.

Emby (formerly known as Media Browser), is a partially open-source client-server media player system. It lets you organize, direct play, and stream all your content media from a local or remote media server.

Emby is not a full open-source media solution, as Kodi is. The “open” part of the source code is its official plugins that can be replicated. An entirely free and open-source version from the original Emby source was created and is known as Jellyfin.

Emby, as Plex or Kodi, also needs a client and server to work. The Emby Server is supported by Windows, macOS, Linux, and FreeBSD operating systems. The server can be installed on a cloud-based server or on-premise. The advantage with a cloud-based server is that it can run 24×7 without you having to update it.

With Emby, you can have access, stream, and play all your personal videos, movies, TV shows, music, photos, etc., from almost any device and platform.

What makes Emby stand out?

Emby is excellent if you want to have more control and customizability over your media player system. If you don’t mind paying the price, you can access advanced features such as Smart Home features, Live TV, DVR, and many more. 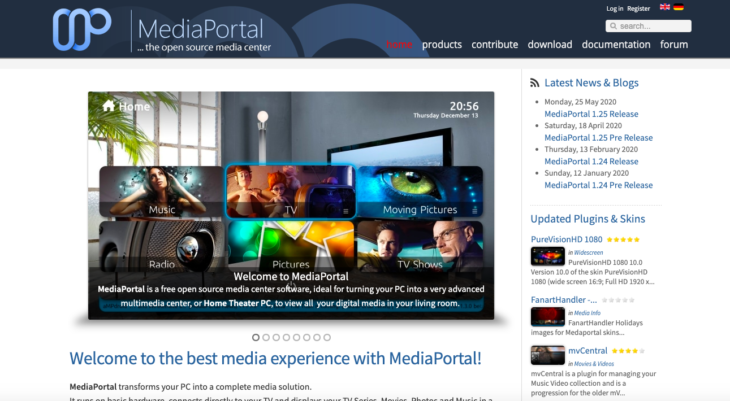 Aside from its media player capabilities, MediaPortal was also designed to be a digital video recorder. The user interface allows you to perform the traditional DVR functionalities, like TiVO or PVR. It will enable you to play, record, and pause live streaming TV, and other locally stored media.

MediaPortal can also be enhanced with its plugins. With MediaPortal or third-party plugins, you can perform additional actions, like streaming for live TV for free, listening to music from popular services, launching emulated games, etc. And if you are looking only for streaming, MediaPortal server allows you to stream TV content (or media collection) over the network.

It is important to note that MediaPortal is specially designed for MS Windows. So it is often used as an alternative to Windows Media Center. MediaPortal is not cross-platform, such as Kodi, Emby, or Plex.

What makes MediaPortal stand out?

It is the best streaming media service for Windows systems. MediaPortal organizes your media and displays it on a beautiful looking dashboard. You can access all your content stored locally or remotely and play it via many clients. 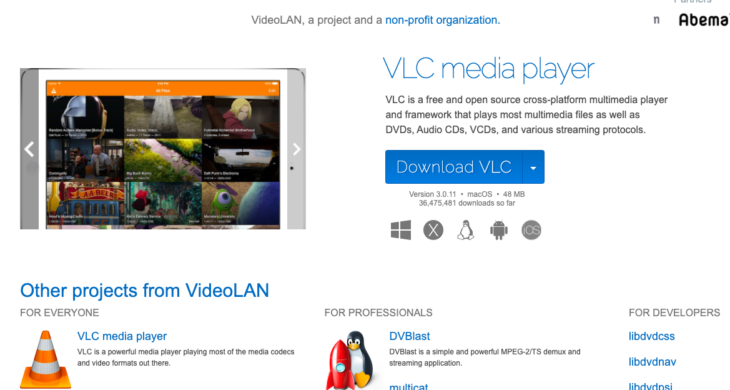 VLC, from VideoLAN, is known as being one of the most powerful video players available. VLC is free and cross-platform. It is supported by the most popular desktop operating system, and mobile platforms like iOS, Android, iPadOS, Windows 10 Mobile, Windows Phone, etc.

VLC is popular because it can play almost any multimedia file, including DVDs, Webcams, Audio CDs, and many streaming protocols. And, most importantly, VLC is completely free (without ads).

Although VLC is more popularly used as a media player for locally stored content, you can also stream media from a remote server. The streaming client-server solution uses a single program, the VLC media player running on the server, and the same application running on the client to stream and receive the streams.

To stream video with VLC, you’ll need minimal configuration from a client. As long as you have a server (local or remote) adequately configured, you’ll have an easy time playing streams over the network.

What makes VLC stand out?

The VLC player stands out because it includes the biggest codec library ever, and it is also straightforward to use and install. Unfortunately, VLC is not designed strictly for streaming; it does not contain an archive server and transcoding on-demand capabilities.

Plex, Kodi, Emby, and MediaPortal are client-server media player systems. VLC is a different kind; it was built to be the media player that can play almost anything. All have various capacities and features, but you can stream for free with all of these applications.

To summarize, Plex is our favorite. It comes with everything you need to create your Netflix-like streaming server. First, it organizes your media with metadata from the web; it streams to multiple clients and transcodes as needed.

Once you master any of these free streaming tools, Plex, or Kodi, Emby, MediaPortal, and VLC Streaming, you will never look back into your Netflix account.

9 Activities To Do In Croydon UK

5 Useful Tools For Managing Your New Online Business in 2020