Girl Talk: I Wanted To Be Dominated

I texted him as soon as I woke up.

“What do you want me to wear today?”

I brushed my teeth and washed my face while I waited for him to text me back.

“White button-down shirt. Tuck it in. Your jeans. Flats. Put your hair in a ponytail. Send me a photo.”

I dressed as instructed, then stood before the wall-length mirror in my apartment’s hallway. Smiling into the mirror, I snapped a photo on my iPhone and sent it to Ben*.

Thirty seconds later, a text message: “Very nice.” Then I knew I could leave for work.

Ben was not abusive. I was not being hurt, nor was I unhappy. We were in a dominant/submissive relationship — or playing at one, anyway — and following his orders got me unbelievably, unbelievably turned on.I have written before about all my drama with Ben: He cheated on his girlfriend, Rachel, with me; he lied about going on a break with her for me; I was so upset when I found out he lied that I emailed her and told her he’d been cheating, etc. But I haven’t been totally forthcoming about the nature of our relationship. Ben and I weren’t just friends who became attracted to each other; we were both extremely, extremely interested in exploring sexual roles as a dom (him) and a sub (me).

Ben cheated on his girlfriend with me, I can now clearly see, because he has strong, natural impulses to dominate a woman in bed and his girlfriend, Rachel, wouldn’t let him. When we were just close friends, Ben would gripe to me about how he and Rachel rarely had sex. As time passed, Ben and I talked frequently over IM or over the phone and flirted with each other more and more. It’s not exactly a secret that I have a fetish about being spanked and at some point — clearly crossing the line of what was appropriate for a guy with a girlfriend and his cute single friend to be discussing — Ben told me he loved spanking women. He loved it. He loved all types of light, sexual domination play — tying women up, using his paddle, hair-pulling — and his girlfriend, Rachel, wasn’t into any of that. And when it came to outside-of-bed stuff, Ben described Rachel as resisting his natural inclination towards leadership. She didn’t particularly like him being protective towards her and he said they bickered constantly. 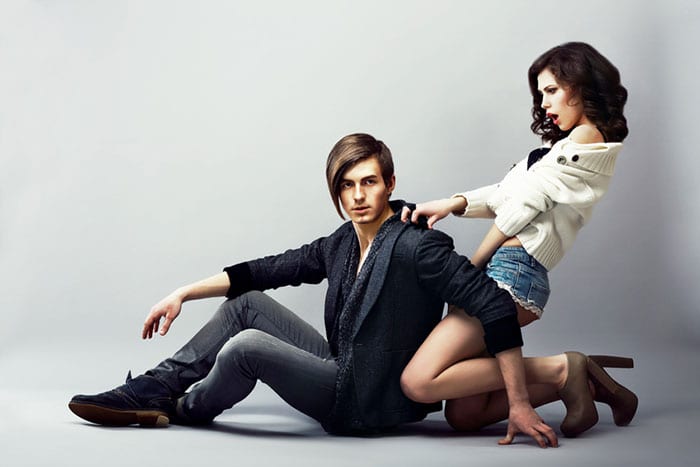 I should be clear, though: Ben wasn’t the first guy I’d come across who professed a liking for domination play. Not by far! My first serious high school boyfriend is actually the one who flipped the pervert switch, making me realize that getting spanked turned me on. My boyfriends freshman and sophomore year of college both spanked me. And this other guy I dated in college actually took me to a “spanking club” in New York City where he rented a paddle and spanked me in public.

Then I dated Jason* after college and, through my relationship with him, I learned that it wasn’t just spanking that turned me on, it was dominance. Jason was over 6-feet-tall, strong and sturdily built. He had a naturally dominant personality. He could be fearless and decisive. He could be a leader. He could be stern and take charge when he needed to. He was protective. And he spanked me and dominated me in bed all the time, of course. But outside of bed, which was starting to feel like catnip in this new, weird way, I always felt “safe” with him because of the way he took charge.

It didn’t work out with Jason for other reasons, but he left me with 100 questions: I’m a feminist. Why do I like this so much? Isn’t this wrong? How can I be a good feminist and still like a man taking charge outside the bedroom? It was 2006 around this time, so, of course, I spent a lot of time on Google looking for the answers. By searching terms like “spanking” and “domination,” I discovered many, many women online who wrote blogs sharing the same desires I held. They had college degrees, jobs, made their own money, etc., but they were sexually attracted to men who dominated them both inside the bedroom and outside. (Some of these women are in what’s called “domestic discipline” arrangements, which have a lot of Christian influences and would take a long time to explain — Google it for more info.) I studied these women for over a year and published an article called “Slap Happy” in the feminist/pop culture magazine Bitch about them. (“Slap Happy” cannot be found online, but writer Amanda Marcotte at the feminist blog Pandagon wrote about it here. And my article was included on the syllabus for a Rutgers University Human Sexuality class!)

I can’t explain to you how all-consumingly liberating it felt to know it wasn’t just me who wanted this. This is something hundreds of other women and men love, I thought. This is a part of me and my sexuality that I can be honest about. I was pretty sure I didn’t want to be dominated by a man all the time like these women; though the idea of domination “play” some of the time, like Jason and I had engaged in, aroused me more than I had ever felt before. 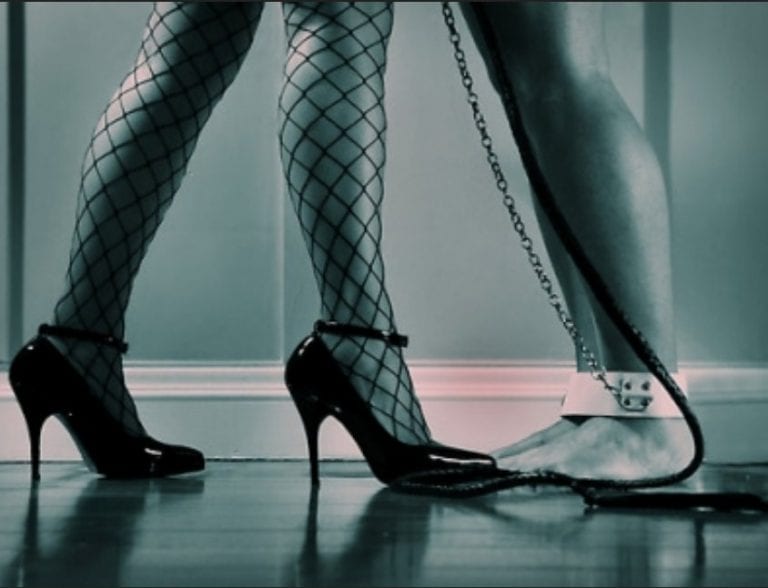 So, back to Ben: when he revealed to me that he got off from being dominant, I felt like I’d found the golden ticket. We not only shared the same kink but the same intensity for it? Ben wanted dominance and submission “play,” all the time? Seriously? Where had he been all my life?

But because Ben was still dating Rachel (his girlfriend of four or five years, I think), we didn’t do anything about this for a long time. We flirted for months and months, occasionally talking about our mutual love of spanking and domination, but in the one very intense month after he said he wanted to break up with Rachel to be with me, domination and submission “play” consumed us. First musing about it. Then doing it over IM, email, phone and text message.

Much of the non-sexual domination “play” with Ben was just a shift of our regular friendship: We’d talk about the stuff we’d usually talk about, but he would take a more dominant role, sternly issuing instructions. For example, I had a co-worker who was experiencing some difficulties and being the naturally hyper-anxious person that I am, I’d fret all the time about the fate of her job. “Don’t worry about her; it’s not your responsibility. Worry about yourself,” he would say. And I would follow his instructions.

But there was the more obvious domination “play” component: As part of our “play,” I would ask him permission to do lots of things. I told him about all the kinds of bras and panties in my drawers and each morning he’d tell me which ones to wear, which I would send him in a photo. I would ask him how to dress each morning. I would ask him if I could watch a movie or if I had to work on writing a freelance article more. If I “disobeyed” him during this sexy-talk “play,” he would tell me over the phone or over IM how he would “punish” me.

But it was the sexual domination that was most amazing to me. Even though we physically had not been intimate with each other yet because of his girlfriend, we had phone sex with each other frequently where he’d verbally explain to me how he was going to spank me. And much of our IM chats and emails were dirty talk about future spanking “punishments” to come: He would promise I’d be spanked 10 times for this or that infraction. He’d also tell me whether he was going to spank me with his hands or with his paddle. And, of course, we would talk dirty at length about having intercourse. Through all of this, he wanted me to call him “sir.”

Basically, Ben was one kinky motherf**ker.

I think all the buildup actually raised my expectations too much, because the one and only time Ben and I were physically intimate with each other, it was a bit of a disappointment. Oh yes, he was sexually dominant: He instructed me to strip, to crawl on the floor and fellate him, and he spanked me with the paddle he kept in his closet. But something about him seemed skittish, like he was not giving 100 percent. I remember thinking, Where’s the guy who is a marvelous dirty talker? The deflation could have been because Ben was cheating on Rachel with me; however, I got the sense that Ben liked talking about dom/sub more than actually doing it.

I never got to that find out: A week or so later, everything with Ben crashed and burned. It was messy, it was bad, and it was a horrible time in my life. It’s not necessarily worth repeating and if you must, you can read about it here. 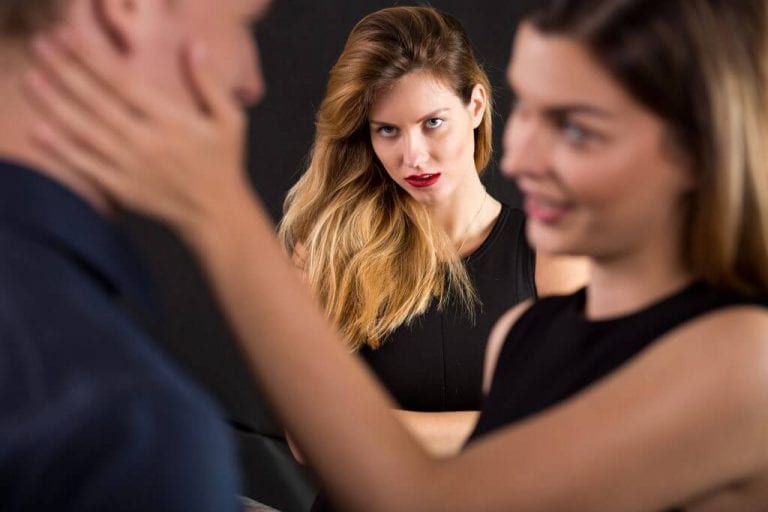 My spectacular crash-and-burn at a dom/sub relationship, even though it was messy, was educational in ways I never could have imagined. I now see that what Ben and I had was not a romance and we had no foundation to sustain a relationship beyond sex. That was just a disaster waiting to happen. But I also realize now that Ben and I didn’t know what we were doing and we did not have the foundation of trust that a dom/sub relationship needs. Not “should have,” but “needs.” With no exceptions. I gave Ben trust that he had not earned yet. When he would instruct me to stop worrying about my co-worker, I would listen, but really Ben had done nothing to prove he was worthy of this trust. In fact, if anything, he was negatively trustworthy for not having ended his relationship with Rachel yet. It was my fault for trusting a man who was not trustworthy and I take full responsibility for that.

I also learned that when it comes to sex, sometimes people do like talking about stuff more than they like doing it. They think they want it. They say they want it. But — and this is where needing to be able to trust someone’s word comes in — they’re afraid to fully experience what all their sexual impulses are telling them. Maybe it’s because it’s scary to them. Maybe it’s because it’s so taboo. I don’t really know: I just know that Ben turned out to be that person while I was not.

I’m glad I have nothing whatsoever to do with Ben anymore, of course. But I am kind of bummed my first foray into a dom/sub relationship didn’t work out; I really would have loved it. Now, I’m in a loving, committed relationship with the man I am going to marry and we have a happy sex life, but he does not share the same desire for dom/sub “play” that I have. But these days, given how I had such a negative experience with domination the first time, I’m not eager to repeat it.

8 Things You Should Know About Blake Fielder-Civil, Amy Winehouse’s Ex-Husband