Girl Talk: Why I Brought A Scale Back Into My Home

It’s been seven years since I owned a scale. Back then, I was 19, and obsessively chronicling my calories, workouts, and incremental weight changes. 105 one day. 106 would send me into a panic attack. 106.5 put me over the edge. When a handful of months later, I’d find out I was 121, my world would turn upside-down.

Yes, I was one of those young women who, by all clinical definitions, had an eating disorder. I can’t exactly tell you how I came out of it. I tend to think I just outgrew it. But if eating disorders are about extreme method and control, then my exodus was something of a doodled roadmap, an attempt to stop thinking so much. Which I guess is why I can’t really remember the progress. But I can remember one thing: the women’s magazine article voice in my head telling me, “Beauty is not a number. Throw out your scale, Scary Spice! Fill your fridge with broccoli and Yoplait non-fat yogurts! Write down daily affirmations! Buy some self-tanner! This is how you’ll be a better you!”

I filled the fridge with broccoli and Yoplait. I ate all of it in a day. I did one affirmation before saying, “What the fuck? I don’t do affirmations.” I put on the self-tanner and looked like Snooki’s body double for a week before never going near a bottle of Jergens again. But, I did throw away the scale. And that stuck. Over the next seven years, I’d see my weight only a handful of times. At the doctor, I’d turn my back and request the nurse to keep the number to herself. 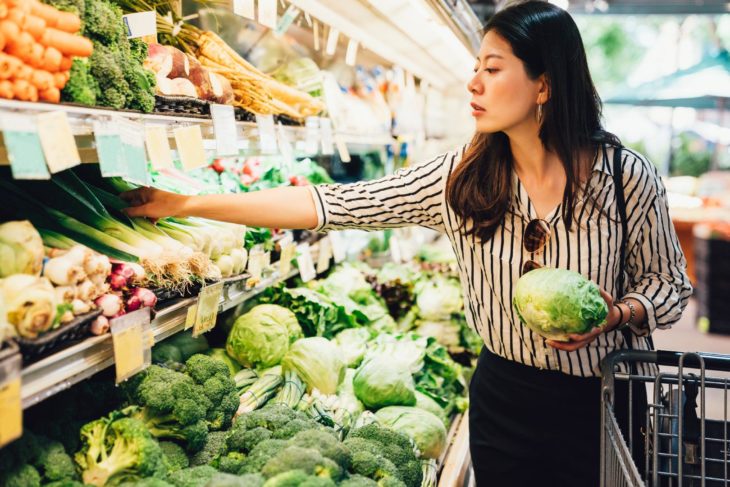 I’m finally at a place where I feel pretty OK about my body. I mean, I think it’s pretty much impossible, or at least rare, to look in the mirror and be like, “This is perfect.” There’s always something you want to “fix.” I guess the difference is that I don’t turn around my entire life to run after it. But, I still stand there as I get dressed and silently assess whether it looks like I’ve gained a bit or lost a bit.

Admittedly, the decision to bring back a scale was … really random. After post-work drinks, I made a detour at Target on my way home, as I’ve been known to do when tipsy. (Don’t ask … there’s something about being slightly inebriated that makes me do things like clean and shop for random household items.) As I filled my cart with the world’s most random things — extension cords, tampons, face wash, bananas, hangers, Windex — on a whim, I threw a scale into the mix. The last time I’d weighed myself had been at a friend’s house about six months ago, and I had been pretty pleased with the number. I was in a really good place then: glowy, feeling fit, jeans hugging in the right places. After being in an exercise and healthy eating rut since then, I wondered where I was now.

When I got home to try out my new gadget, the number that confronted me (about seven pounds heavier) definitely made me realize that while my eating and body issues are exponentially healthier than they were when I was 19, the downside is that I tend to treat everything as normal, and I tell myself, The difference is in your head. You look the same. That night, as I looked down at the digital numbers, I didn’t think, I’ve got to lose weight, but rather, This is what you are. And that’s OK if you’re being good to yourself. But you know you haven’t been.

In the weeks after, I began weighing myself a few times a week. And yes, the number fluctuates a couple pounds here and there (not counting the normal, daily fluctuations), but it’s weirdly given me some peace of mind. On days where I think God, have you gained weight? You look pudgy, and step on the scale to find the same number as last week, I now know I’m being unreasonable and dramatic. And times when I feel I don’t know whether my body has changed, a number can tell me whether I’m being crazy or if I’m on point.

I realize sitting here and blabbing on about weight doesn’t make it seem like I’m the most level-headed human out there. I’m not. But I’ve been crazier. And if you want to tell me that there’s a large majority of women who look in the mirror everyday and think, I look amazing! or who never, ever think, I feel fat, then I’d seriously like to meet them. All I’m saying is that sometimes, all your inner body image monologue needs is a confrontation with reality to get her to shut up. Or at least chill out a bit.

Do you own a scale? How often do you use it? Do you feel like it’s good or bad for your body image? Share in the comments!

Women Working as Topless Waitresses and Strippers – Is It Degrading?

Healthy Eating: A Solution to Biohacking Stress in...