Singapore is an incredibly photogenic city whose landscape is graced with an eclectic mix of colonial edifices and ultra-modern architectural marvels—as well as everything in between. Shutterbugs should have no problems finding beautiful buildings to train their lenses on, as the city is gorgeous during the day and positively enchanting when night falls. Book a Singapore tour package with Traveloka and ready your camera for an unforgettable photo walk by visiting these five iconic buildings in the city. 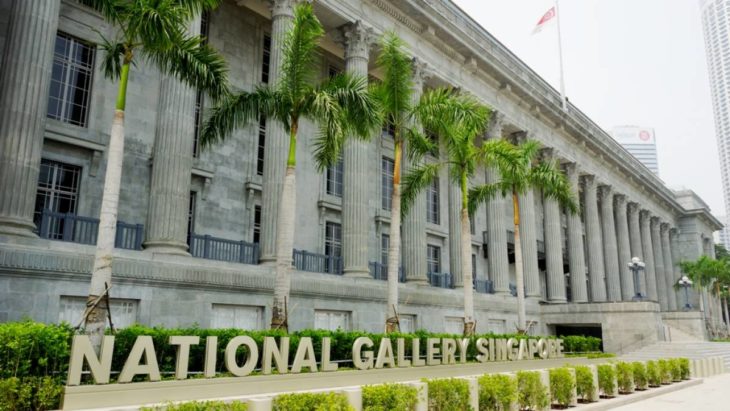 The National Gallery Singapore on St. Andrew’s Road is the perfect representation of the country’s commitment to be forward-thinking without losing sight of the past. It consists of two national monuments: the former Supreme Court building, which was finished in 1939, and the City Hall building, which was built between 1926 and 1929. Both structures underwent refurbishments and interior renovations to incorporate modern elements designed by the French architectural firm Studio Milou Architecture. The National Gallery is handsome on the outside and positively stunning from within. 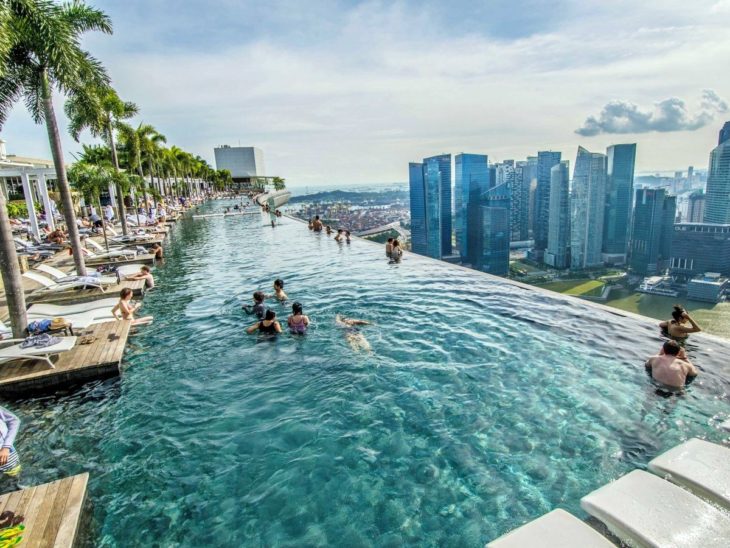 The integrated resort hotel fronting Singapore’s Marina Bay is easily one of the city’s most photographed landmarks, perhaps second only to the Merlion statue. Indeed, its imposing silhouette has become synonymous with Singapore.
The Marina Bay Sands was designed by Israeli-Canadian architect Moshe Safdie, who drew inspiration from the stacked deck of cards to create the three towers’ iconic shape. They are connected by a single continuous lobby at the base and topped by the three-acre SkyPark.
The entire complex is a testament to the wonders of modern engineering, standing 194 meters tall and taking up 155,000 square meters of space. The interiors are as breathtaking as the view from the outside, with the central lobby providing a preview of the immensity of the structure. Indeed, the resort hotel houses 2,500 suites and rooms, as well as a four-level casino, a convention center, a museum, a theater, and an endless array of high-end shops and restaurants. The equally photogenic ArtScience Museum is in the same complex and is designed to look like a lotus bloom, just starting to unfurl.
While you’re at the Marina Bay Sands, you should also check out the Helix bridge; a pedestrian bridge encased in a stainless-steel double helix design from end to end. It, too, is beautiful when all lit up in the evenings. 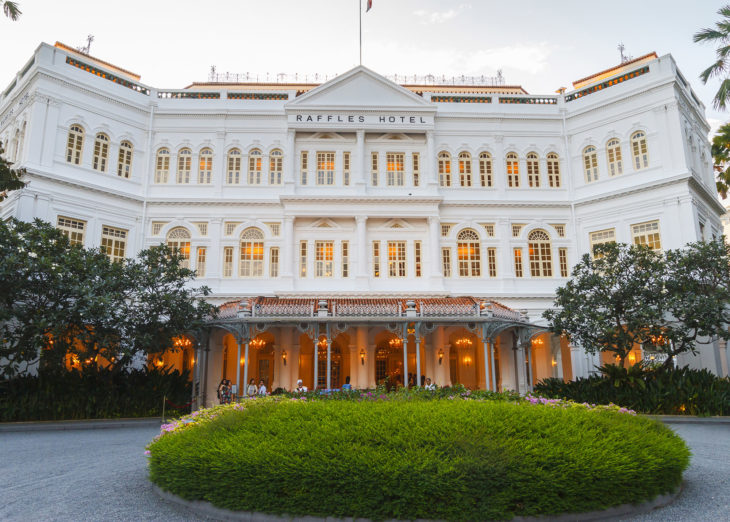 Opened in 1887, the Raffles Hotel is Singapore’s most famous hotel, named after the nation’s founder, Sir Stamford Raffles. Though its layout has changed throughout the years as new amenities and new building wings were added, its distinctive colonial façade has remained relatively untouched.

It is a gorgeous showcase of neo-Renaissance architecture that has been meticulously preserved throughout the years. Tropical features such as high ceilings and spacious verandahs were added to promote better airflow throughout the building, accounting for the hot and humid climate. It has been continuously improved upon and restored to maintain the stately elegance that has enchanted esteemed guests such as English novelist and journalist Rudyard Kipling, actress Elizabeth Taylor, and Her Majesty The Queen, Elizabeth II. 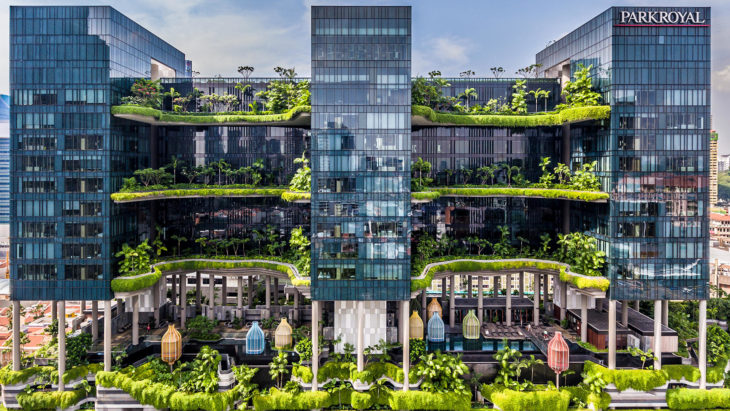 Described as a luxury eco-hotel, PARKROYAL on Pickering is a 5-star hotel in the Central area owned by the UOL Group and is part of the PARKROYAL collection. Its unique “hotel-in-a-garden” concept was designed by local architecture firm WOHA, which is known for incorporating natural vegetation as well as sustainable strategies into their plans.
Its most distinguishing feature is the sheer amount of greenery adorning its exteriors. Tropical plants and trees grow out of balconies, whose curves and contours were inspired by natural rock formations. Steel and glass merge seamlessly with foliage and water features, resulting in an oasis-like structure that seems to have sprouted in the middle of the city.
The design philosophy continues inside, where floor to ceiling windows allow plenty of natural light to pass through to illuminate the lobby and guest terrace. Additionally, the building functions on an innovative solar energy system and utilizes rain harvesting to conserve water. It is nothing short of an architectural and environmental triumph that should be worth more than a couple of shots. 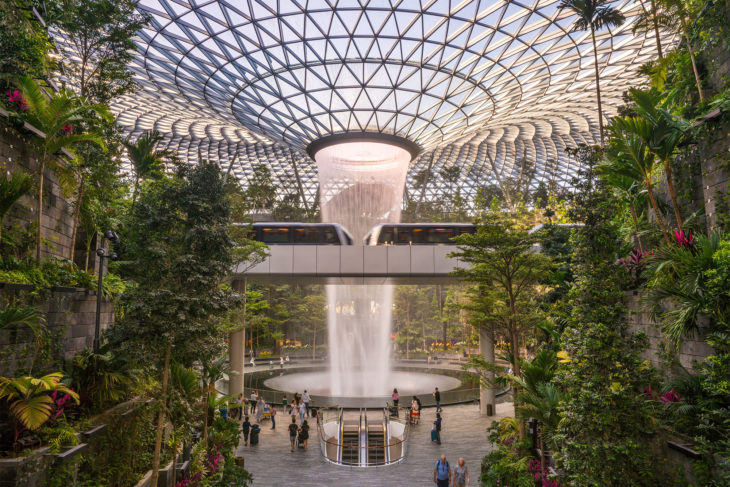 The newest addition to Singapore’s impressive list of mega-structures is JEWEL Changi, whose tagline is “Discover a wondrous world where nature meets retail.” As the country’s primary gateway, it is a mind-blowing introduction to what is already an incredible place. Singapore’s Changi Airport has consistently topped the list of the World’s Best Airports for the last six years and counting. The addition of JEWEL has only elevated its status as a premier stopover for travelers.

The nature-themed retail and entertainment complex is the result of a need to extend Changi Airport’s Terminal 1 and its open-air carpark. Its neo-futuristic toroidal design is the work of a consortium of architects led by the mind who conceived of the Marina Bay Sands, Moshe Safdie. Its most photogenic highlights include The Rain Vortex, the world’s tallest and largest indoor waterfall that also serves as JEWEL’s centerpiece. Surrounding it is the Shiseido Forest Valley, one of the most extensive indoor gardens in all of Asia. It houses 60,000 shrubs and 3,000 trees, occupying 22,000 square meters of space. There are two more gardens on the topmost level; one is a topiary garden called Topiary Walk, while the other is a showcase of seasonal flowers called the Petal Garden.

The architectural delights don’t end here. There are many more historic structures and contemporary landmarks in Singapore that are worth photographing. Thankfully, the city is incredibly easy to explore, thanks to an efficient public transport system that can get you from location to location in a snap. For the best value, purchase a Singapore Tourist Pass when you land, as this entitles you to unlimited rides on standard bus services, the MRT, and LRT. Enjoy your visit!

9 Movies to Bring Out Your Inner Techie

The Ultimate Guide in Choosing the Best Landscaping...