Hitched: Who Does The Most Housework In A Marriage?

And lo, the Lord did create the men and women who populated the earth. The manifold men did go to the office and get good jobs in middle management and take the trash out on Thursdays while lady helpmates did joyously stay home and wear aprons and make dinner and vacuum and mop and scrub the toilets and make the beds and raise the children and dust the bookshelves and manage the home accounts and do the grocery shopping and mend the clothing and take the children to appointments and preside over the laundry apparatus, which the Lord, in all his wisdom, saw fit to make too difficult for men to comprehend.

This was called the division of labor, and behold, it was fucked up.

Some time later, when Satan created feminists, the terms “second shift” and “double burden” entered the lexicon, and verily, people got riled up. Happily, things have gotten better over the past 50 or so years, with married men taking on more and more domestic responsibilities. Still, women today do about twice the housework of their male partners and women’s labor is often nigh invisible, because it doesn’t come with a paycheck. It often doesn’t even come with a “thank you.” And we’re not talking about traditional stay-at-home mothers; we’re talking about families with dual incomes. 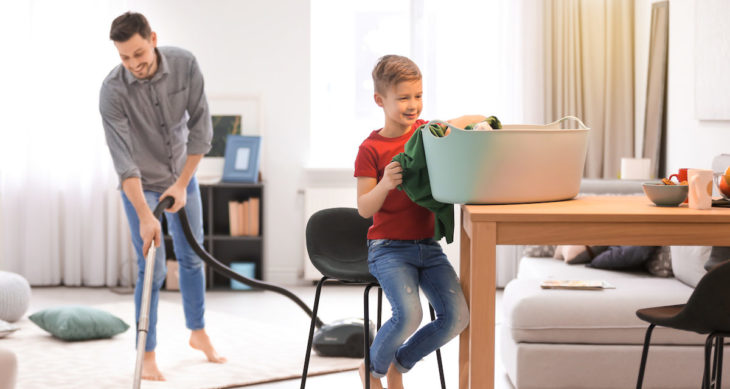 Fact: women work at work, and then they work more than their partners at home.

This all brings me to say something that I really can’t say without sounding like a huge brag, but it’s true: I don’t know what this problem feels like. Patrick and I simply don’t seem to be part of the statistics that show women do more domestic work than their partners. We’ve been living together for over 18 months, and the only disagreement we ever had about domestic responsibilities happened probably four weeks into our relationship. It was over scallops.

I’d made scallops for dinner — the first time I’d ever cooked a proper meal for Patrick. At the time, I lived in a loft, so if you were standing in the bedroom, you were standing in the kitchen. Old fish smell is not an aphrodisiac. Despite my normal inclination to abandon the mess to the sink and make a mess of the sheets post-meal, a minimum of cleaning had to be done.

I cleared our plates and started loading the dishwasher. Patrick retired to the couch with his whiskey and we sipped and talked while I straightened up. I’d fully expected Patrick to at least offer to help with something — it’s what my mom had always taught me to do in someone else’s house. He didn’t.

My mind immediately ran to my worst fear: this man of which I’d become so enamored was, in fact, one of those dudes who thought only women did housework! At least, I thought, scallops are easy and quick. At least I didn’t go full Beef Wellington on this dude.

Patrick picked up on my anger and asked what was up; my first inclination was the classic deflect-and-sulk. After all, if he can’t read my mind, why should he get any more scallops, ever? But then, I did the unthinkable: I straight up told him what I was worried about. I said that I thought a polite offer to help was just good manners, and since it didn’t come, I worried that he was one of those dudes who thinks they simply don’t belong in a kitchen, and especially don’t belong anywhere near the responsibility of cleaning one up. 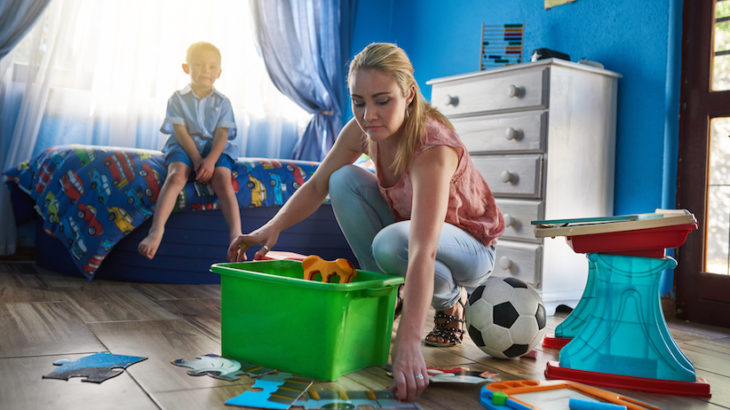 Patrick was bringing over empty wine glasses before I could blink twice. I’d overreacted completely, reading a social script I was terrified of enacting on a situation that was basically about Patrick not being totally sure what the appropriate post-dinner move was supposed to be with a new friend. Dudeliness never played into it; I totally projected that on the situation. (For the record, if Patrick’s mother is reading this, he does have lovely manners.)

Since then, I don’t think we’ve had another conversation about cleaning anything, apart from trying to figure out whose turn it is to do the cat boxes, because nobody on Earth wants it to be their turn to clean a cat box. Not only are we on the same page with domestic stuff, but I learned a valuable lesson very early on in our relationship, which is that playing guessing games with boyfriends creates drama, but not results. (Would that I’d realized that a decade ago! Sorry, all of my ex-boyfriends, ever.)

Today, it’s hard to say whether Patrick made me a neater person or I made him a messier one. I’ve always been loathe to pick up after myself (scallop dishes notwithstanding) and Patrick’s always run a tight ship. Now, I’m less likely to leave coffee cups out to become science experiments, but Patrick’s also way less interested in making the bed every morning. We’ve both given in a little to the other’s way of life.

Both of us work full time, but I work from home, which means I have more access to the little day-to-day straightening-up opportunities than he does, and I also make more of a mess at home. So when his dad comes to town? I make the house presentable before it’s after-work Dad-hosting time. But I don’t mind, because Patrick will spend a Sunday afternoon deep-cleaning the kitchen counters while I go to yoga. Not because I asked him, but because he likes himself some clean fucking kitchen counters. It’s beautiful.

Sometimes of a Saturday, we’ll crank up the country radio and give the house a thorough going-over, Patrick gleefully sucking up crud with the Dust Buster while I bleach the stovetop. To be sure, some of what we do in our household is traditionally gendered: I cook and plan meals the vast majority of the time, and if someone’s mowing the lawn, it’s probably Patrick. But he cooks occasionally, and I’ve learned my way around our uncooperative, Craigslisted lawnmower. 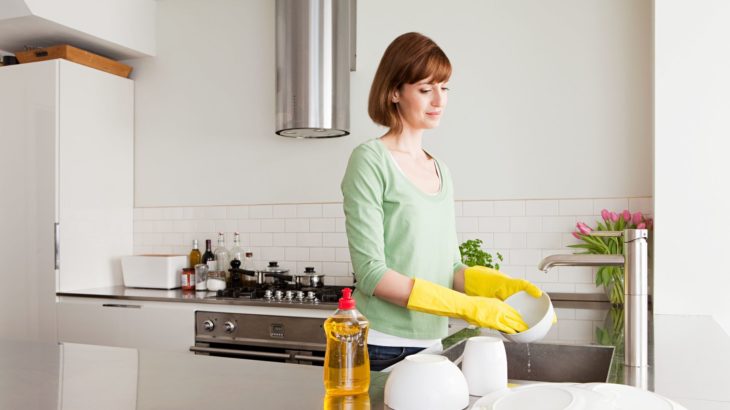 We’re simply better at these things, for a variety of socially ingrained and culturally determined reasons, but I’m fine with that. You can pry my Emerilware out of my cold, dead hands, whereas Patrick is practically the damned lawnmower whisperer.

When I say there’s been give-and-take between us, I mean it. Because we both equally gave up on our garden and took our asses inside to watch television on weekends instead. While we both lament the death of our tomato plants, nobody’s nagging the other to water every morning. We are dream roommates who also happen to be crazy in love with each other. It’s a tremendous blessing from the universe … for everyone but the garden.