In 1992 I knew exactly what I wanted: a Barbie Dreamhouse with a working elevator. I wanted that Barbie Dreamhouse more than I wanted anything in the whole world. More than I wanted a pony. More than I wanted jellies (which are sandals made from glitter encased in plastic, a fact you really already ought to know). I wanted a Dreamhouse even more than I wanted a Ziploc bag filled with my own urine. (I was a little Howard Hughes-y back then.) Tragically, all these things I desperately wanted were deemed “not allowed” by my mother. And for the most part, I understood. I was OK with not getting a pony (it seemed like too much work) and I was OK with not getting jellies (we lived on a gravel road, which is a notorious jellies killer). I was even OK with the “no piss in a bag” decree (I did it once in ‘89 and it’s not really the kind of thing you want to do again, even if it did make me see urine as yellow magic flowing inside of me.)

The “No Barbie Dreamhouse” thing really bothered me. My usual tactics of public tantrums and emotional manipulation did nothing to change my mother’s mind.

“But MOOOOOOM! Kayla* and Jennifer* and Crystal* all have Barbie Dreamhouses! Why can’t I???” I would wail, throwing my small body upon the cold tile floor of our local Wal-Mart. (*Names have been changed to protect the victims of divorce.)

Sadly, my parents never fought and always seemed annoyingly in love. Boring. When I brought up the idea of divorcing for the sake of my Barbies, they just laughed at me like I wasn’t full of yellow magic.

I was running out of tactics and the Barbies needed shelter desperately! The Troll Doll Gang was gaining on them and Ken was drinking… again. So I decided to build my own Dreamhouse, one that didn’t need a foundation steeped in divorce.

The first attempt at building My Dreamhouse was good in theory but dreadful in execution. I had a particle-board bookshelf in my closet brimming with “The Baby-Sitter’s Club,” “Goosebumps,” and every ghost story ever written by Mary Downing Hahn. The location wasn’t great, but it was a two-story remodel, and the Barbies weren’t picky. I rolled up the sleeves of my sensible turtleneck, removed the books from the shelves, and then stacked them in the corner. The process was way more tiring and distracting than I had anticipated (paperbacks are so HEAVY and ghost stories are so entrancing)! But for the sake of the honorable Barbie Family, I trudged onwards towards completion. 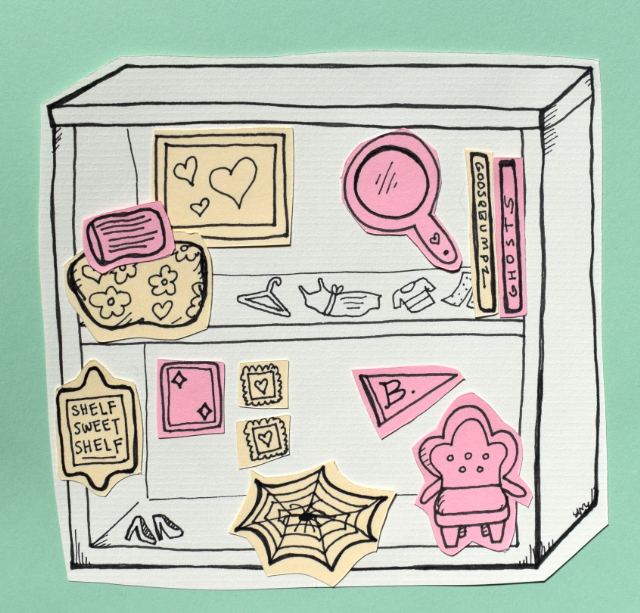 I made tiny, tasteful paintings and hung them on the “walls.” I rolled up socks to be little pillows. I balled-up my older sister’s cool floral leggings to use as a bed. And I implemented a Halloween placemat as a festive rug. It was the house of my Barbie’s dreams! I carried “Caboodle’s Barbie” joyfully over the threshold. (Yes, “Caboodles Barbie” comes with a tiny Caboodles cosmetics container. Jealous???) Caboodle’s Barbie stood up in her new dream-home to take in the moment, but she couldn’t stand up all the way. The bookshelf was made for paperbacks, not leggy dolls, and it had really low ceilings I hadn’t noticed until that point. Devastated, I shoved all the books back onto the shelf and checked the Barbies into The Duffle Bag Homeless Shelter for the night.

I made tiny, tasteful paintings and hung them on the “walls.” I rolled up socks to be little pillows. I balled-up my older sister’s cool floral leggings to use as a bed. And I implemented a Halloween placemat as a festive rug.

It took a few days for me to be able to look into my Barbies’ glittery eyes again. Ken was now officially missing and Baton-Twirling Skipper refused to wear anything but a Kleenex, making her look like a disturbed, baton-twirling hospital patient. The Barbie family was not in a good place, until an interesting piece of real-estate caught my eye.

It was during my nightly bath that I began to see the toilet in a whole new light. The pink fluffy stool cover matched the Barbies’ decor and I could use the top of the tank as a balcony! There was even room underneath to park the hot-tub-limousine. It was pure real-estate genius.

The Barbies moved into their new home and were happy for several days. Since there were three toilets in my Realhouse, it wasn’t hard to keep my family away from the new Porcelain Dreamhouse. (The last thing the Barbie family needed was someone to use their pool without asking.) 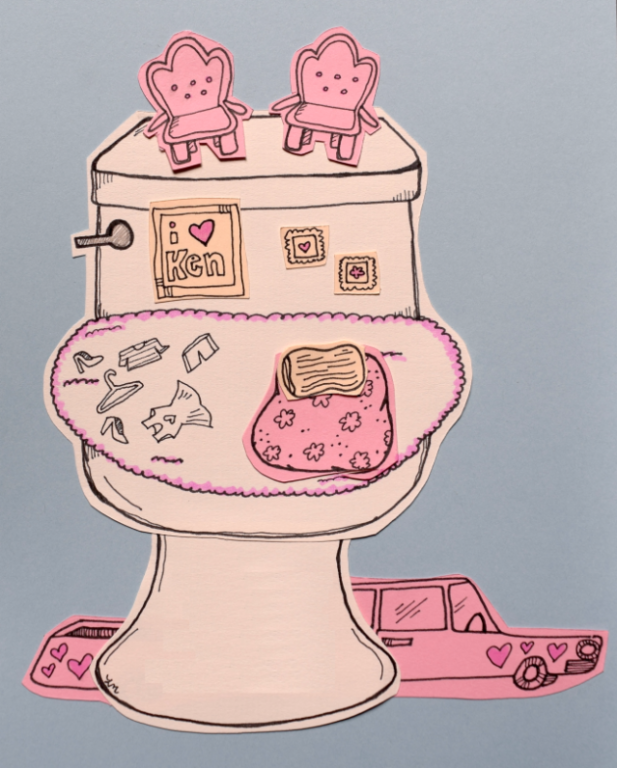 And then the unthinkable happened: my dad dropped some kids off in the Barbies’ pool — uninvited. No amount of lit matches could right this wrong. The surviving members of the Barbie family never spoke of the ordeal. We decided to move our dreams elsewhere.

Throughout the rest of my childhood, I made many incarnations of the Dreamhouse. One I constructed from modified shoeboxes, one I made from a blanket-tent, and I built a really cool art deco one in the microwave until my mom halted construction due to safety issues. None of the Dreamhouses I built were perfect, but there were things about all of them that I loved. And they were all mine.

When the ‘90s and the heyday of the Barbie Family ended, I grew older, but not much wiser. I would find myself waiting and whining and wishing for new things I wanted “more than anything in the whole world” like my dream job or my dream body or my dream life.

But one day, tired from all my whining, I remembered what my mom taught me back in 1992: No one is gonna buy you your Dreamhouse. You have to build it yourself.