The New York Times Style section usually emits more groans from me than cheers. Remember that piece about how bangs are “in”? And how women wear dresses? So I was ecstatic this week to see the Modern Love essay is by Jillian Keenan, a woman with a spanking fetish who is struggling to come out about it to her boyfriend. The essay touched on the struggles female spankos face from a judgmental and/or misunderstanding public, namely that we all must have suffered sexual abuse (not true) or must be gravely damaged in some way (also not true). And I was particularly delighted that 50 Shades Of Grey got only a brief mention. 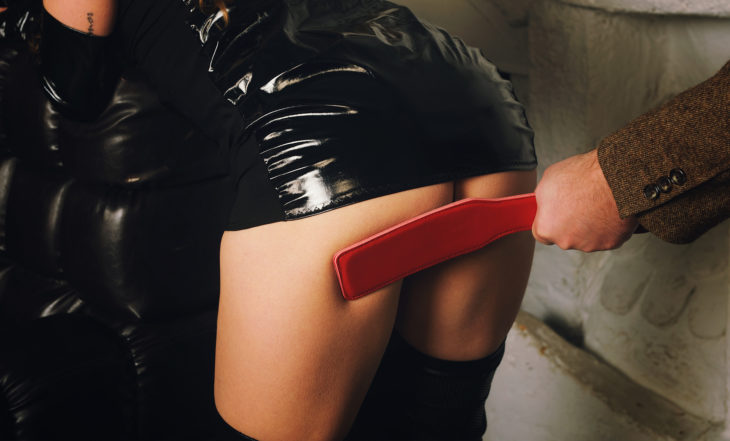 Most interesting to me is what Keenan writes about “coming out” with her fetish. She writes:

My dilemma was clear: how could I describe my desires to David when I could hardly confess them to myself? Spanking fetishists don’t have a tradition of coming out. The comparisons to child abuse and spousal battery are inevitable, upsetting and often impossible to dispel, so it’s easiest to keep our interest private. … “Coming out of the closet” isn’t the right expression. We’re not in closets that can be left in a single step as the door clicks shut behind. “Coming out of the house” might be better. Or “coming out of the labyrinth.”

It is a coming-out of sorts, but of course it’s different from the experience of coming out of the closet as gay or trans or queer (or etc.).  First of all, no one will refuse to allow me to marry or adopt children because I like to be spanked; no stranger has ever threatened to beat me up because of it. Strangers can’t “tell” — or think they can tell — by looking at me that I have a fetish. In a way, a spanking fetish is more privately revealed. Coming out with a fetish is actually a small series of little “coming outs” with your various partners over the years, but never coming out to your parents or grandparents. (Unless, I suppose, one feels like telling their parents or grandparents for some reason.)

There is the matter of finding those partners: gay/trans/queer person can oftentimes find the lid to their pot much more easily if everyone identifies themselves clearly. It’s not like you can walk into a bar and tell who has a your fetish. Someone with a spanking fetish, or any other fetish for that matter, can try dating web sites like FetLife or spanking parties. But more often than not tries to ascertain whether their potential partners are into the fetish or “vanilla” through trial and error. I’ve written about my own experiences with this, which have sometimes been negative.

I’m really proud that this author put her name to her piece in the New York friggin’ Times, which is braver than I would be able to be. Good for her for coming out to her now-fiance — and I hope he spanks her as much as she pleases!

How To Keep Your Feet Looking Nice This Summer