A Columbus, Ohio Planned Parenthood was vandalized this weekend, apparently by some very angry anti-choicers with a very loose grasp on grammar.

Red paint was splattered on the walls, along with graffiti reading “SATAN DEN OF BABYKILLERS GOD SEE ALLLL, MARK 9:42.”

Being that I am not up on my Bible verses, I decided to look this one up!

And whosoever shall offend one of these little ones that believe in me, it is better for him that a millstone were hanged about his neck, and he were cast into the sea.

Is that like the Biblical version of cement shoes? Did they also leave a fish wrapped in a newspaper? Because I’m pretty sure they just suggested that the people who work at that Planned Parenthood and those seeking care there ought to be drowned. Gee, what a pro-life message that is! Praise the lord and pass the…millstones.

The protesters who regularly gather outside the clinic to inform patients walking into the clinic that they are going to hell say they weren’t responsible for the graffiti. Protester Dave Daubenmire told WCMH-TV that his group doesn’t agree with that tactic, stating “We’re more concerned about the red blood that’s inside the building than the red paint that is on the outside of it. To us, it is just a distraction of what’s really going on inside that place.”

Daubenmire, by the way, is a former high school football coach who once caused a minor controversy by having players pray with him before games. Also he thinks that not letting Christian students bully gay kids in school is a form of bullying against Christians! 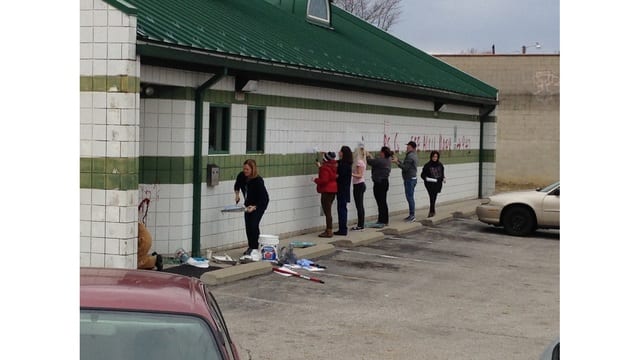 Planned Parenthood released a statement regarding the vandalization, reading “The individuals responsible for this act hope to send a signal that using acts of violence will intimidate healthcare professionals and the women we serve. They are wrong. At Planned Parenthood, our doors will stay open… No matter what.”

Huge cheers to all the clinic workers, doctors and volunteers that have to deal with all of this–and worse acts of terrorism–on a regular basis, so that others can exercise their reproductive rights and have access to needed healthcare.

Go Hog Wild In The Sack With Bacon Lube

Girl Talk: Why I Stand With Planned Parenthood