I have a cat. Her name is Daisy. She’s fat, relatively fluffy, pretty attractive, but with the emotional and actual intelligence of a piece of used Kleenex. I adopted her from a woman named Eva who fostered cats out of a railroad apartment deep in Greenpoint, Brooklyn. When I arrived at Eva’s house to meet her, she was living with an astonishing number of other animals: three that were hers, a couple more that were up for adoption, a few playpens in the dark corners of the living room full of kittens, and a pair of Russian Blues I never saw but only heard, mewling from the bathroom. “They’re sick,” Eva said, as I made my way through her house, “but you can look at them if you want to.” 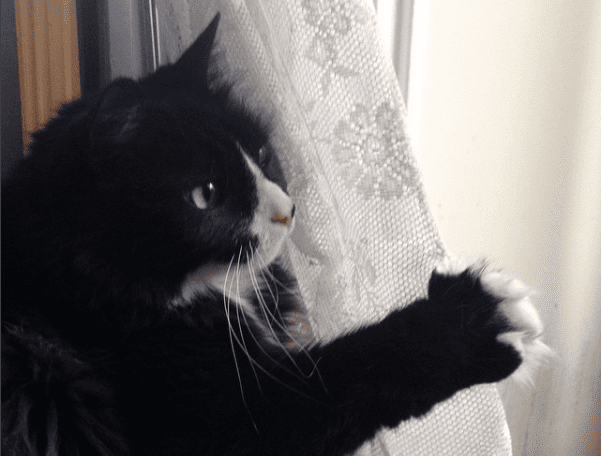 Daisy adapted to her new home with ease. My sister’s cat, Crusty, lives with us as well. He did not handle the change with grace, and five years later, his life has been irrevocably changed. Daisy’s presence — fat, impassive, harmless — is the bane of his existence. When he’s not dragging a travel neck pillow across the floor, yowling and rubbing his body against it in a neverending cycle of unresolved sexual release, he’s chasing Daisy around the apartment, biting tufts of fur from her back and eating them. When the radiator kicks to life in our house, the cats come together in an uneasy truce, each tolerating the others’ presence as they splay their fat bodies in close proximity to the heat source.

Most of the time, they tolerate our ministrations of affection. I sing songs to Daisy and she looks at me, dumbfounded, before leaving the room. To pet Crusty anywhere on his body for longer than five minutes is a good way to test your tolerance for pain, for his needle teeth will sink into the soft flesh off your arm. Daisy, for reasons that are beyond my ken, shits on the floor in small rabbit turds, like marbles. She’ll only poop in the box provided if you watch her. Together, they ruin couches, piles of books, French presses. Crusty once ate a piece of thread that cost $6,000 to remove from his body. If you define companionship as physically sharing a space with something living besides yourself, then a cat fits the bill. But to look for anything else in that cat-human relationship is pointless. It will only leave you heartbroken.

Cat people are secret masochists, the kind who get off on unrequited love and willingly commit themselves to a life at the mercy of a four-legged creature that knocks water glasses off the coffee table for sport. Dogs are thirsty, the animal kingdom’s equivalent for people who tweet at brands and celebrities in a search for approval. You never have to wonder if your dog loves you or not, because it’s as plain as the shit-eating grin on his or her face. Their passion for you is unbridled, bordering on obsession. Cats, if left unattended with fresh food, water and a restroom, will exist happily in your absence for days, wandering the halls of their personal prisons, sleeping on piles of fresh laundry, expelling dander with every sigh. We love our cats because we consider ourselves their saviors. But the return on investment is pitiful. God forbid you disturb your precious angel’s 19th hour of uninterrupted sleep with a gentle pat on the head. In this relationship, affection is reciprocated at their whim. For a cat, submitting to your affections is a Pyrrhic victory.

To live with a cat is to live with a particular kind of Stockholm syndrome. We adopt pets because they provide companionship. A dog will love you unconditionally for the rest of your days. Cats resist traditional companionship by doing the bare minimum. They occupy the same physical space as you against their will, yet somehow we become their emotional captors. An affectionate cat that demonstrates anything beyond passing interest is a rare thing indeed. Treasure it.

The Best Moments In Bullshit From Last Night’s GOP Debate

15 Funny Differences Between Dogs and Cats