Restaurants That You Didn’t Know Were Owned by Celebrities

We all know about the famous celebrity chefs who own their own restaurants – and we may even have been lucky enough to have got ourselves a table reservation at a couple of them. Wolfgang Puck’s eatery at the Hotel Bel-Air is a noted example, as is the Savoy Grill in London, owned by Gordon Ramsey.

But did you know that many other restaurants are owned by celebs that you may well not be aware of? From Zach Braff’s oyster joint to…., here’s a list of the eating establishments owned by the glitterati to put on your must-visit list. 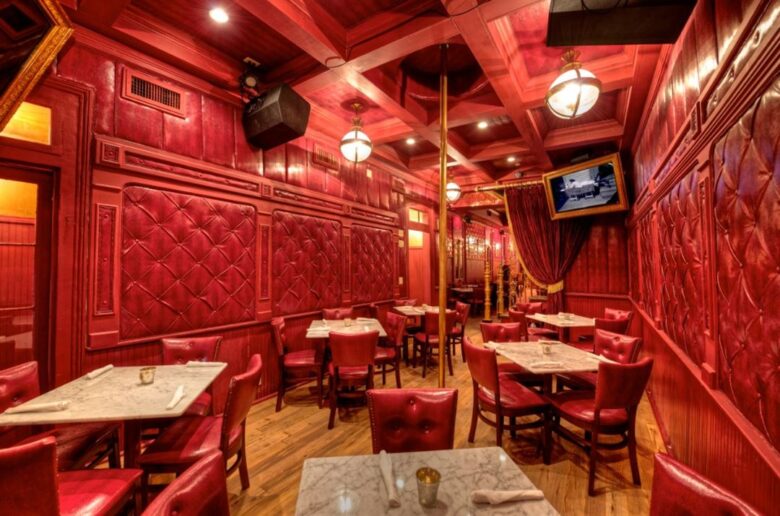 You may be surprised to learn that this popular restaurant and bar in New Orleans is owned by the Step Up and White House Down star!

This venue is as vibrant and full of atmosphere as you’d expect: the menu features dishes such as Fried Alligator Tale, Jambalaya, and other Southern favorites. The drinks menu is particularly note-worthy, with a range of specialty drinks and cocktails – including the ever-popular Dirty Martini!

Nestled in the Beverly Hills area, Tagine is owned by the La La Land star and offers sumptuous Moroccan-inspired fare to its legions of fans. The eatery has a romantic vibe and twinkles with candles as night falls on the city – diners can relax into the mountains of soft pillows as they enjoy delicacies such as North African Stew and Chocolate Soup.

De Nero actually owns several restaurants scattered across the US, and Locanda Verde is the most recently opened of the star’s collection – it’s already gained a cult following for his hearty, shareable plates of delicious, authentic Italian fare.

The dining space is cozy and warm, with exposed brickwork, high windows, and lots of dark wood and richly colored metals incorporated into the restaurant chairs. This style serves as a simple and elegant backdrop for the food, which looks as good as it tastes: Lamb Meatball Sliders, Octopus Insalata, and Duck Arrosto with Rustic Potatoes are just a few of the delights you’ll need to choose between! And if you’re visiting for a date night, then rounding off your dinner with the Warm Cherry Pie for two is perfection.

And for those guests wanting to really push the boat out, the Locanda Verde offers a private dining space that can suit up to sixty guests. 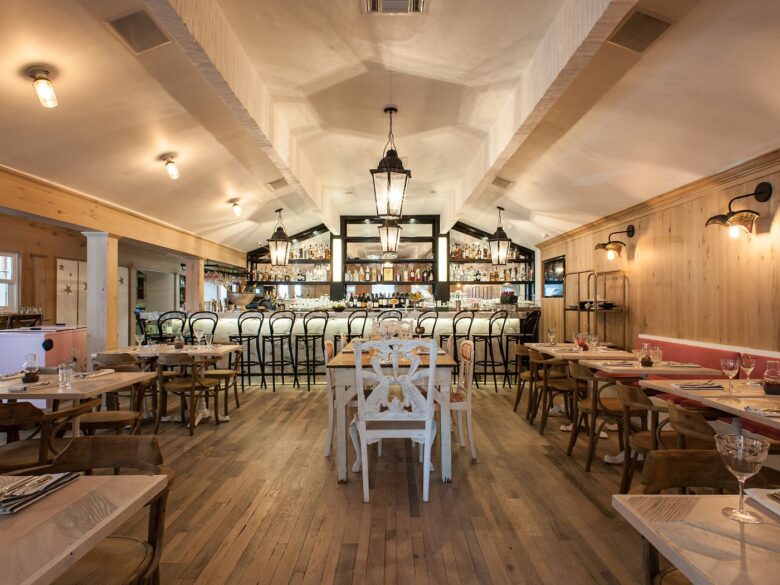 Parents with young kids will love this ultra family-friendly restaurant that’s the brainchild of and owned by the actress. All ingredients are natural and organic, and the menus promote healthy choices. Plus, the restaurant features a designated creative space for kids to play in under the supervision of au pairs employed by the establishment.

Children (and adults!) can even enjoy a trip to Au Fudge’s artisan marketplace before they leave for some yummy handcrafted treats.

Now with two premises in his native New Jersey, Soul Kitchen has proved a way for the superstar rocker to pay it back to the community that raised him.

Designed to be a communal dining experience, these restaurants are unique in that there are no price features on the menu. Instead, guests pay what they can afford and are happy to. The concept behind Soul Kitchen is to battle hunger and give people dignity, even when they’re coping with poverty or other types of hardship, so that they can get a nutritious meal.

By volunteering at one of the restaurants, those in need can earn a Pay it Forward certificate. At the same time, these certificates can also be purchased by paying diners to help further support these beautifully-minded establishments.

Located in LA, in the trendy Silver Lake area of the city, singer-songwriter Moby’s restaurant embodies what he cares about most: food, community, veganism, architecture, and design.

Fusing Mediterranean and Californian cuisine, Little Pine offers a totally vegan menu focusing on seasonal and sustainable fare in a beautiful space. Standout dishes include the Spring Risotto and the Mushroom Bourguignon. 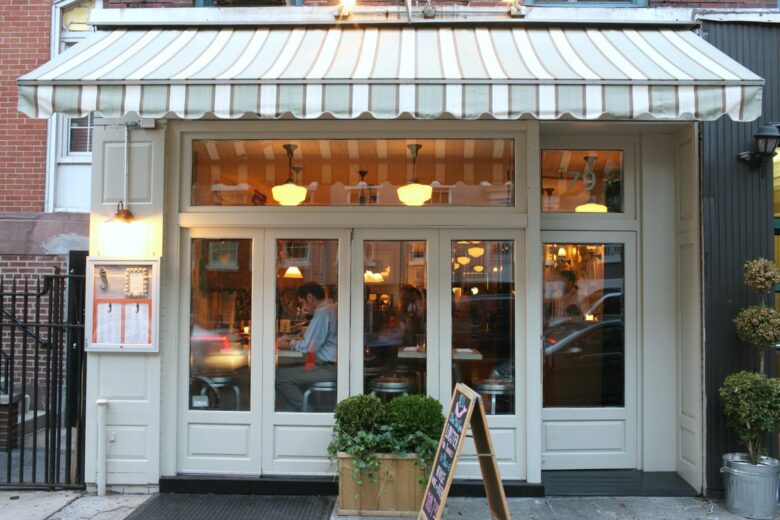 Star of Garden State and the comedy series Scrubs, Braff opened the Mermaid Oyster Bar with his long-time friend, chef Laurence Edelman a few years ago: it’s grown to be an extremely popular, highly rated establishment. It counts celebs such as Harry Styles as loyal customers.

As you’d expect from the name, oysters feature prominently on the menu: you can get them in sixteen varieties here! The Lobster Fritters and Fish Tacos are best sellers, too.

Located on the site of a former Union Pacific railway depot in Utah, Redford’s restaurant has been focused on creating a relaxed atmosphere and serving its guests hearty, all-American fare since opening in 1995.

Choose from a range of main plates: Tomahawk Pork Chop, Five Spiced Braised Short Rib, Cheese Tortellini, and Local Utah Trout. Room for more? How about the Warm Blueberry and Cranberry Cobbler, or the Dark Chocolate Decadence…or both? 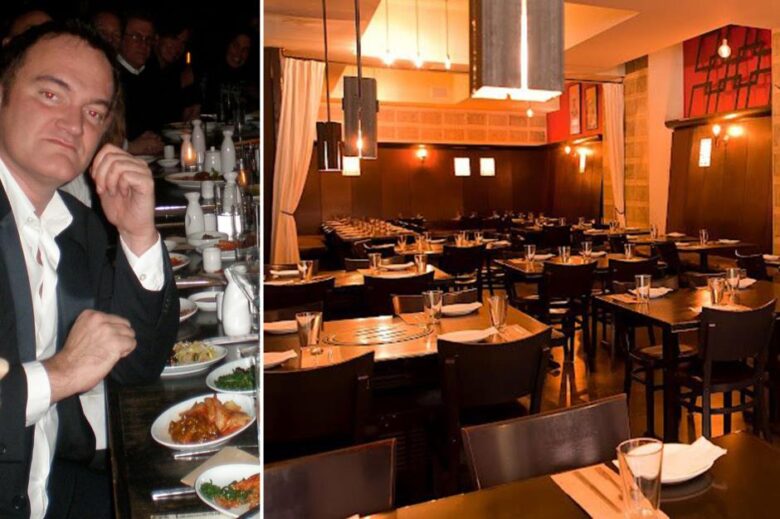 The vintage movie posters that adorn the walls of this Korean restaurant in NYC may make you wonder if the joint is owned by someone connected to the film world…and you’d be right! The legendary director Quentin Tarantino owns Do Hwa.

Aptly enough, there are lots of theatrical elements and fun drama on display here; guests can co-create their own barbecued dishes at their table. There’s also a tasting menu to be sampled, which includes offerings like pajun (seafood pancake), spicy bulgogi (marinated strips of meat), and an al a carte selection of meals.

Not to be outdone by his wife, Jessica Biel, who appears on this list also, the singer-turned-actor opened this restaurant in NYC in 2007. The establishment showcases the best of Southern cooking, highlighting the fiery flavors of Memphis, Tennessee, where Timberlake grew up. A second Southern Hospitality restaurant has now opened in Colorado, so the star is doing something right about the food industry!

Baby Back Ribs and Slow Cooked Brisket are just a couple of examples of comfort food you can enjoy here.

Carbon Fiber Bikes: Pros and Cons of Owning One