Their mother gets a lot of credit for her excellent taste, but Sasha and Malia Obama make just as iconic style choices as Michelle Obama. At the very least, I certainly wouldn’t hate having them go through my closet. 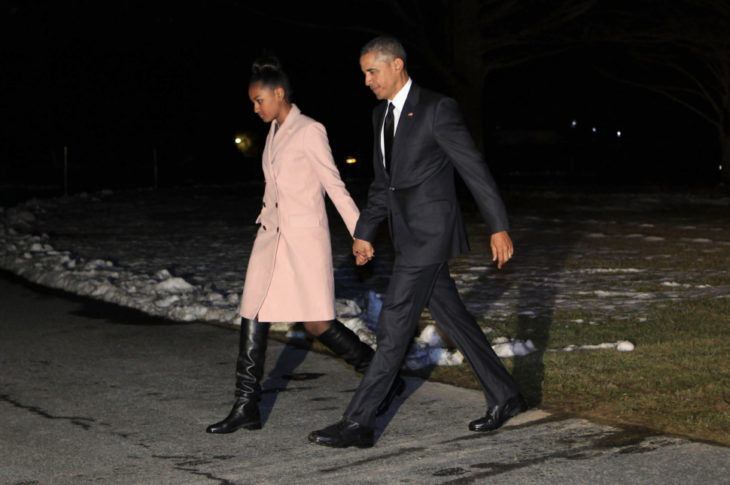 WASHINGTON, DC – MARCH 7: President Barack Obama and daughter Sasha Obama walk from Marine One back to the White House on March 7, 2015 in Washington, DC. The Obamas were returning from Selma, Alabama where they commemorated the 50th anniversary of the march from Selma to Montgomery. (Photo by Dennis Brack-Pool/Getty Images) 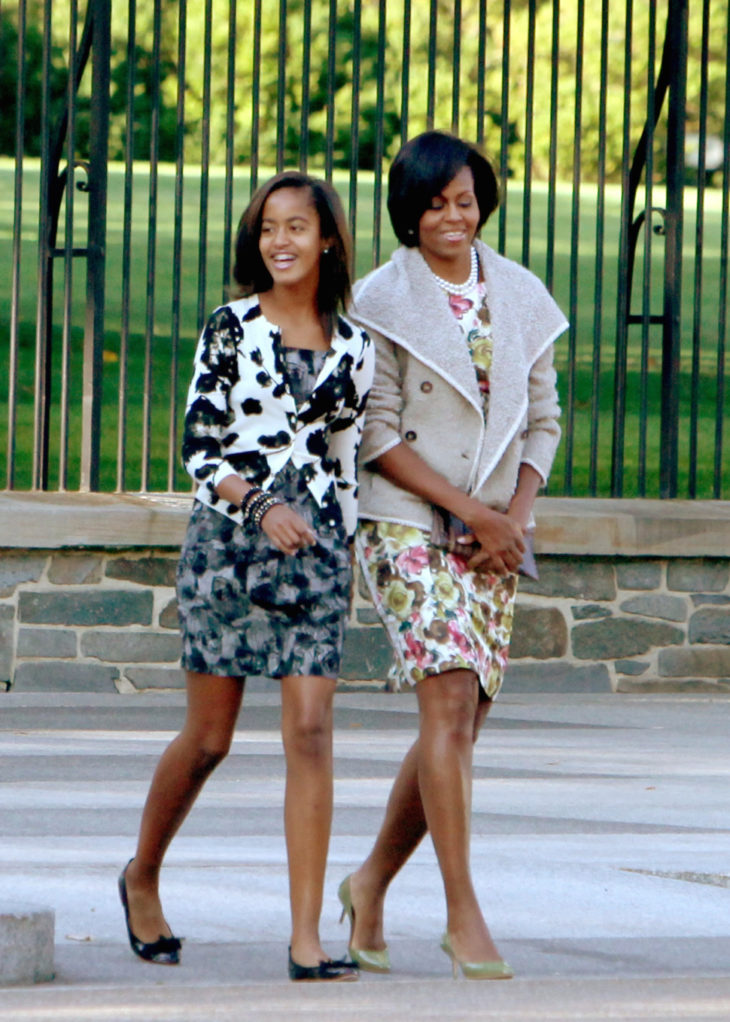 On the way to Church, no less! 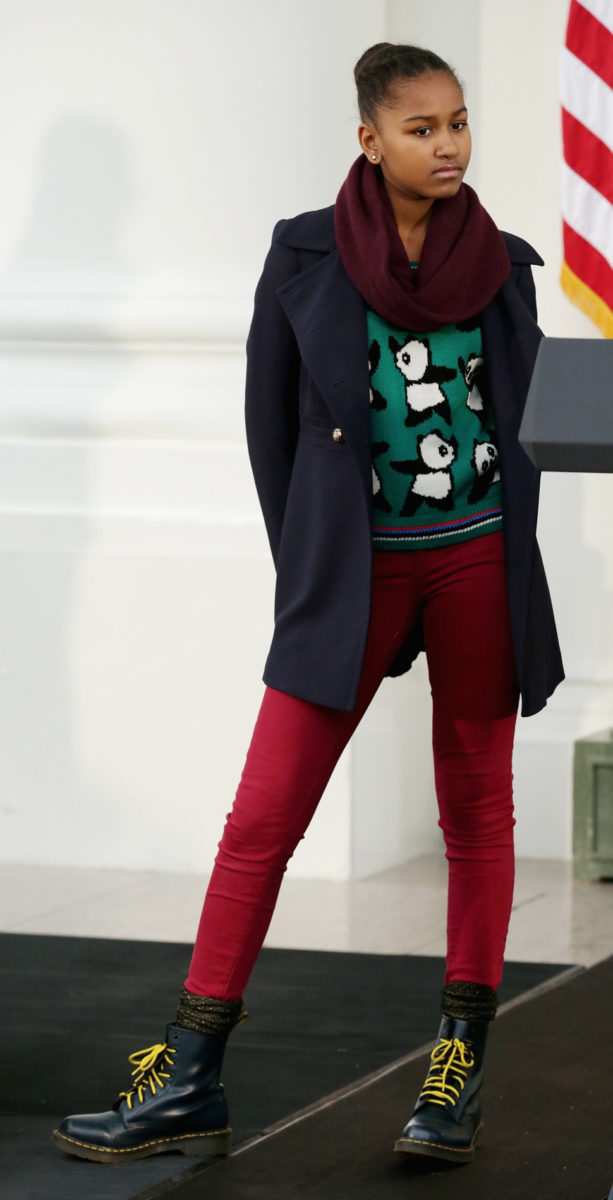 National Turkey Federation Chairman John Burkel of Thief River Falls, Minnesota, and U.S. President Barack Obama and daughters Sasha Obama, 12, and Malia Obama, 15, share a moment as the president pardons the 2013 National Thanksgiving Turkey, named Popcorn Caramel, on the North Portico of the White House November 27, 2013 in Washington, DC. The 38-pound, full-grown Broad Breasted White domesticated turkey, and its alternate bird, will be sent to live at Mount Vernon, the estate and home of George Washington.

This panda get-up is fabulously reminiscent of her famous unicorn sweater, and while I refer to it was a phase here, I’m actually hoping her excellent taste in knitwear is anything but. 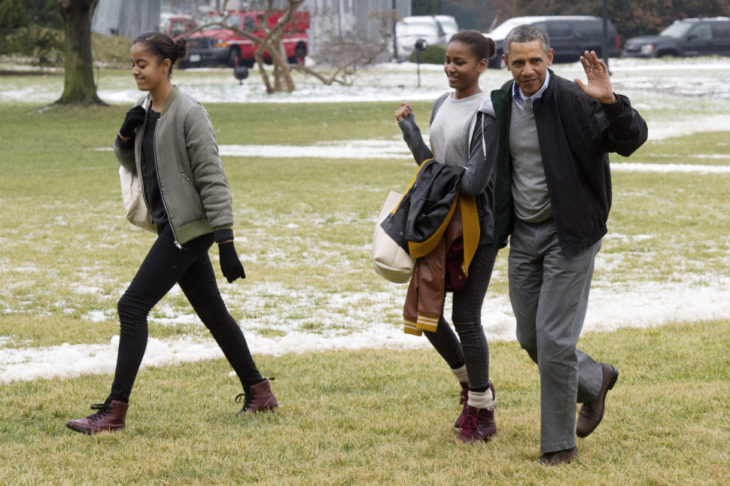 WASHINGTON, DC – JANUARY 5: (AFP OUT) U.S. President Barack Obama (R) waves beside his daughters Malia (L) and Sasha (C), as they walk across the South Lawn of the White House after arriving by Marine One January 5, 2014 in Washington, DC. Obama returns from a two-week holiday in Hawaii. (Photo by Michael Reynolds-Pool/Getty Images)

When Malia dresses like an average teen (versus the political style goddess she’s usually walking around as), she always does it with a certain air of inexplicable fanciness that her peers could never match. Here she cosplays a typical teen donning leggings for a plane ride with her family — only instead of a Southwest jet, she’s getting off Air Force One. NBD. Bonus points for Sasha’s twin look. 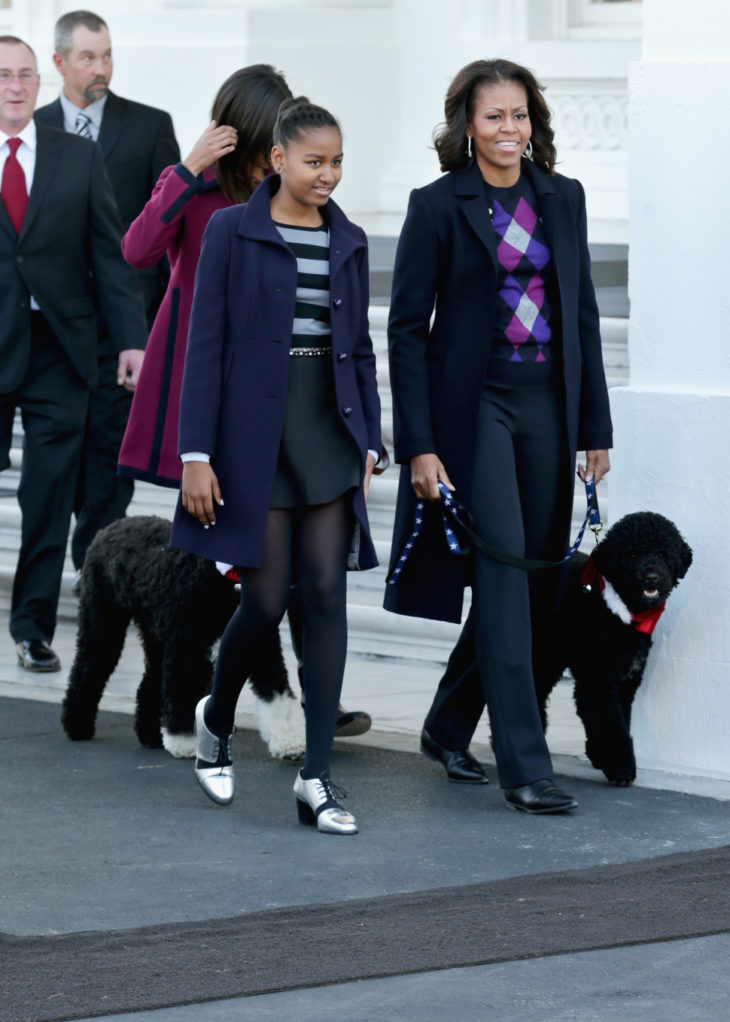 I can’t decide what’s to love most here. The dogs, Sasha’s skirt or those shoes!? I have to admit that I’m also maybe a little biased by Michelle’s stunning non-ironic use of argyle, though in this gallery she is meant to merely frame her daughters’ style from the sidelines, which she can handle, because she gets plenty of fashion cred every other day of the year. 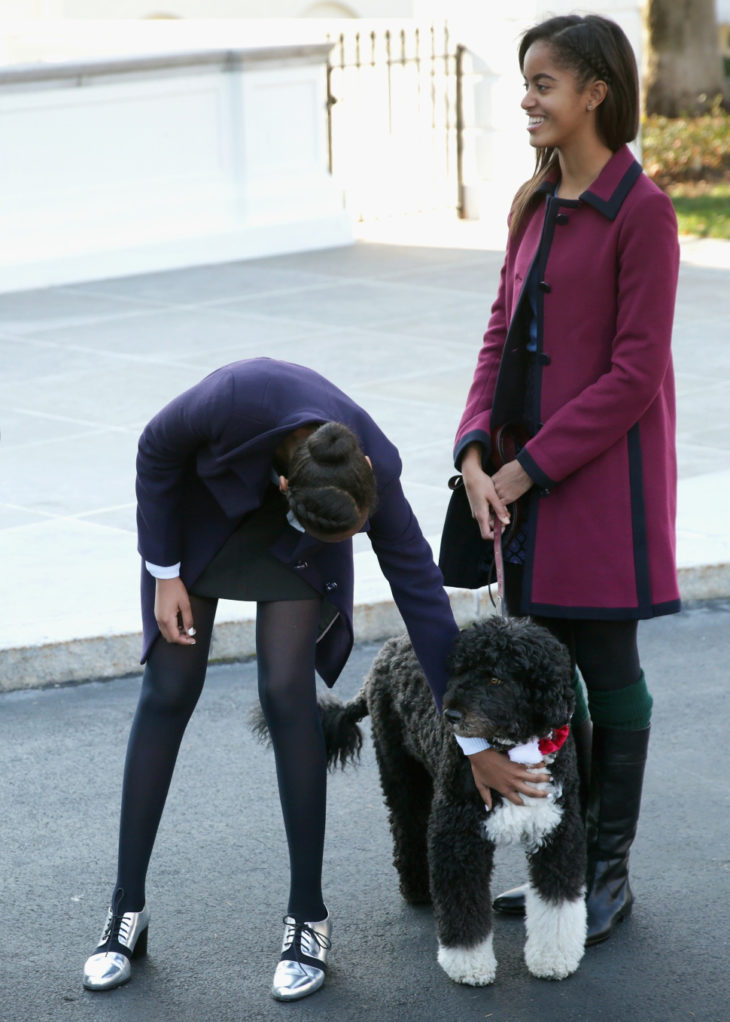 The coat may be the true showstopper of this photo, but also note Malia’s ability to pull off those cute little socks that peek out of the top of fall boots — make no mistake, those things may look simple, but pulling them up to just the right length and keeping them from sagging is a superhuman feat. 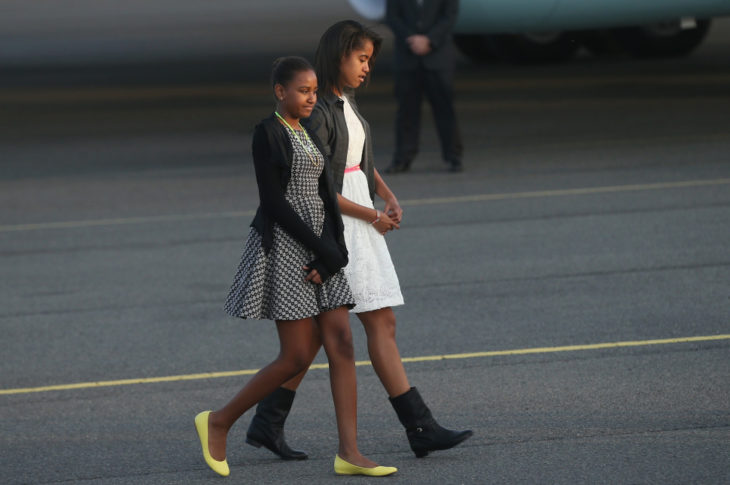 For once, the phrase “pop of color” is appropriate.

8. Everything About Malia Right Now 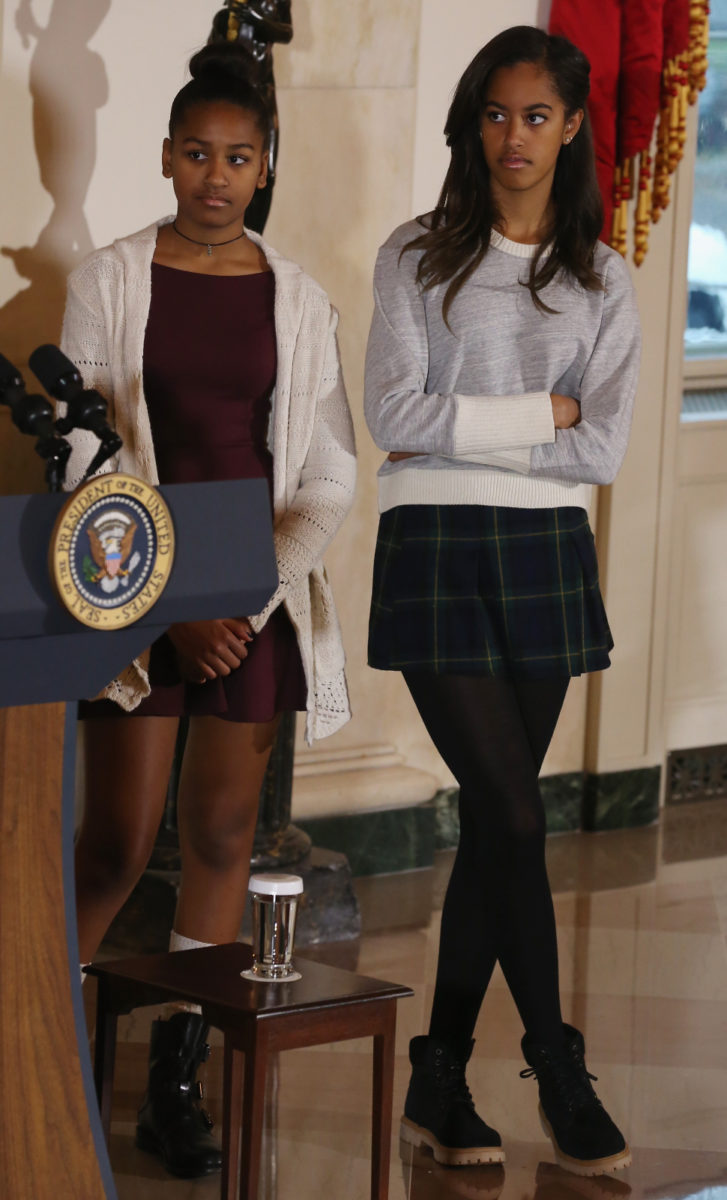 Best teen forever and ever. 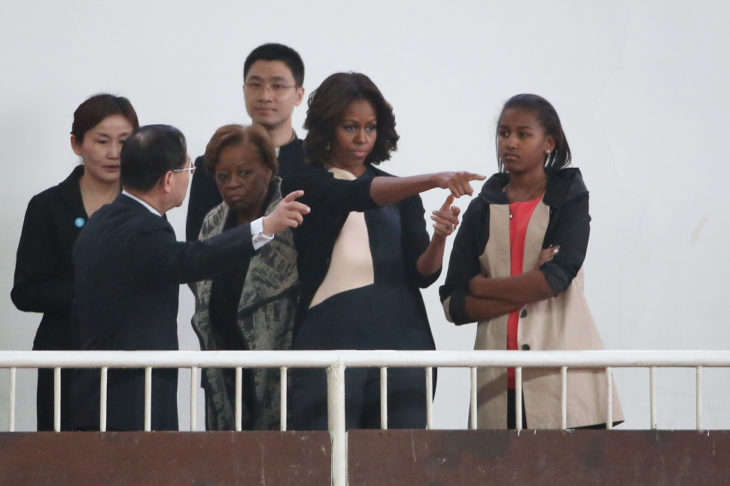 First Lady Michelle Obama with her daughters Malia Obama and Sasha Obama, mother Marian Robinson visit Museum of Terracotta Warriors during a visit to the historic excavation site on March 24, 2014 in Xi’an, China. Michelle Obama’s one-week-long visit in China will be focused on educational and cultural exchanges.

It is my everything. Also, can we note photographers’ freakish ability to catch the Obama girls looking as bored as possible in every instant? 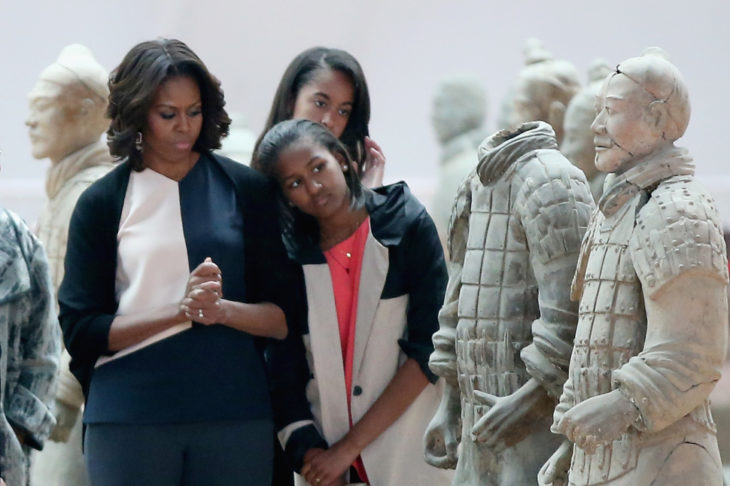 First Lady Michelle Obama with her daughters Malia Obama and Sasha Obama, mother Marian Robinson visit Museum of Terracotta Warriors during a visit to the historic excavation site on March 24, 2014 in Xi’an, China. Michelle Obama’s one-week-long visit in China will be focused on educational and cultural exchanges.

Because it’s just too cute.

10. When Malia Was Fly At The Colosseum 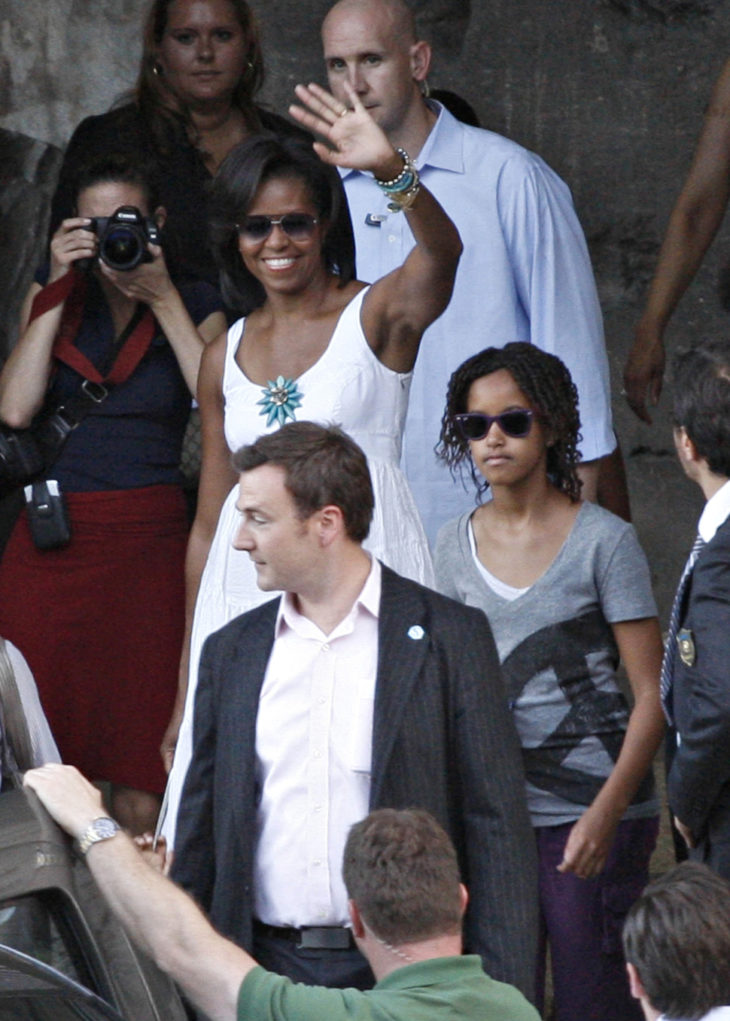 Michelle Obama visits the Colosseum with her daughters Sasha and Malia in Rome, Italy on 8th July 2009. Her husband Barack was in L’Aquila for G8 Summit. FameFlynet, Inc – Beverly Hills, CA, USA

In this picture, Malia was just 11 years old as she stood in front of the Colosseum (NBD) with her mom, but that didn’t stop her from being the most boss, unimpressed pre-teen who ever lived. 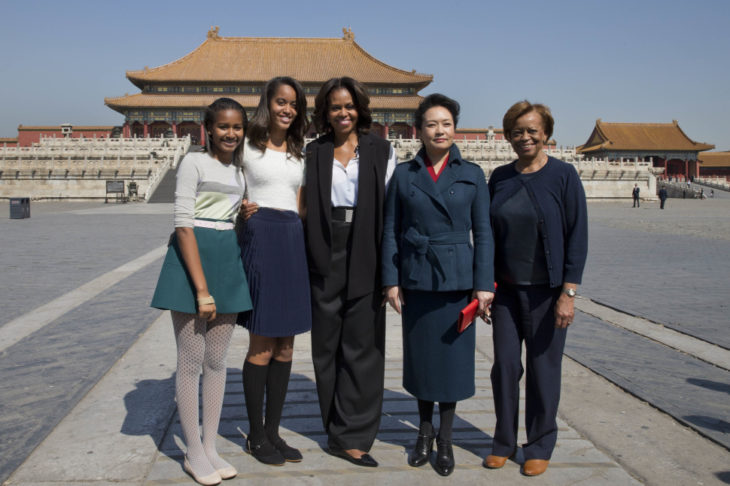 Where can I buy every single piece of her outfit? 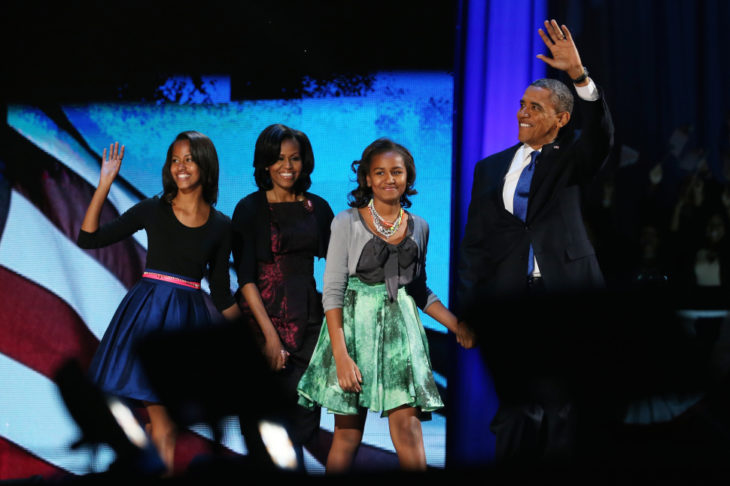 No matter that this is the night her dad was re-elected, because what is really important here is where on earth I can find that perfect skirt. It looks like spring florals, galaxy prints, and one of those crushed-velvet figure skater skirts all had a baby.

13. Whatever This Situation On Malia Is 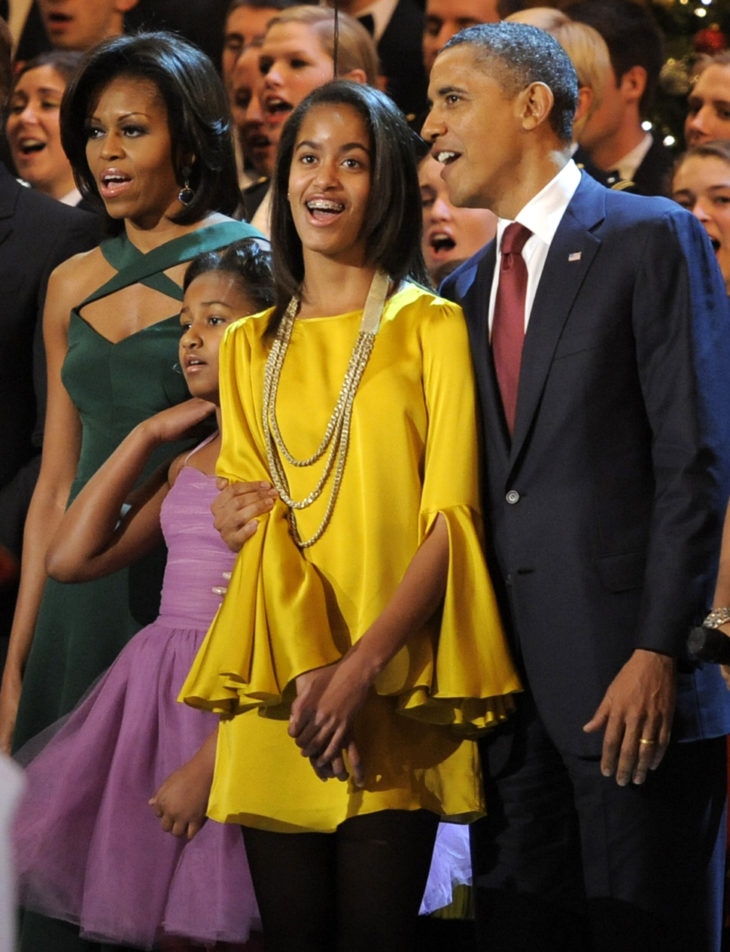 US President Barack Obama, first lady Michelle Obama and daughters Malia (2nd,L) and Sasha join in for a final song at the conclusion of the performances at the annual “Christmas in Washington” gala, December 11, 2011, Washington, DC.
ISP POOL PHOTO via UPI/Mike Theiler

A frock? A blouse? A tunic? Whatever it is, it’s beautiful and is calling to my soul.

14. That Time Sasha Was Garden-Party-Chic 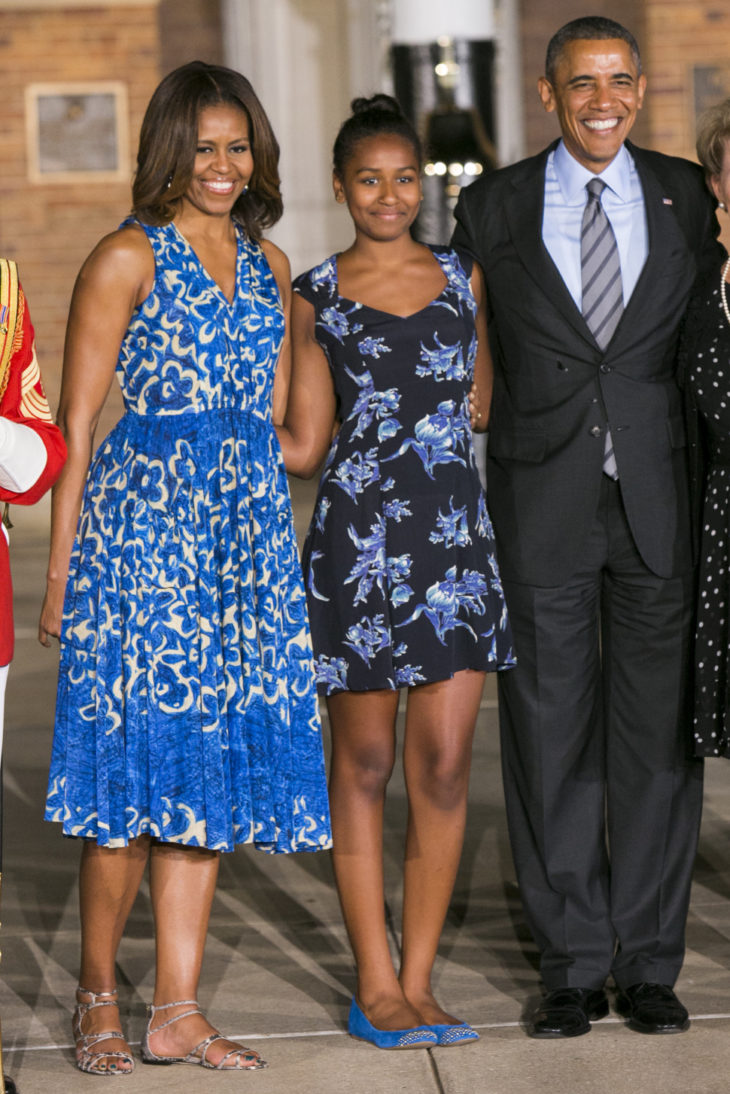 And perfectly coordinated with Mom and Dad. 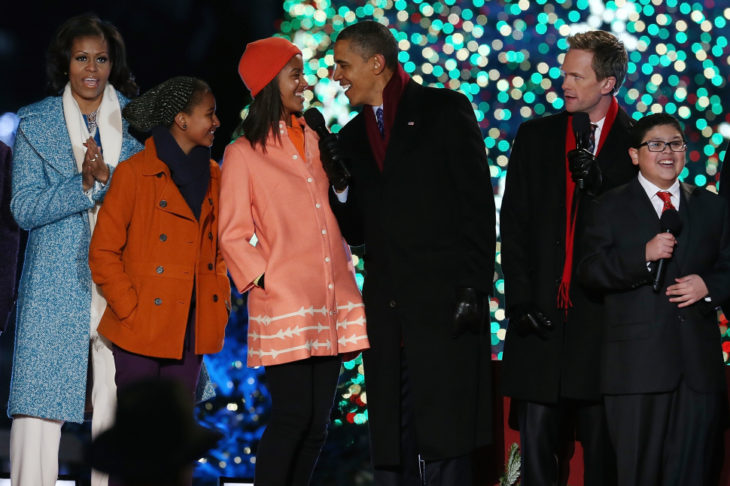 I have seen so many style bloggers wear this coat, and lo and behold, our very own First Daughter wears it too! I admire her commitment to being a living example of her father’s politics by behaving like an everyday American, wearing run-of-the-mill upscale clothing when she could spend every day wearing custom made upscale clothing from any designer she pleases.

…Which She’s Worn More Than Once Like A Normal 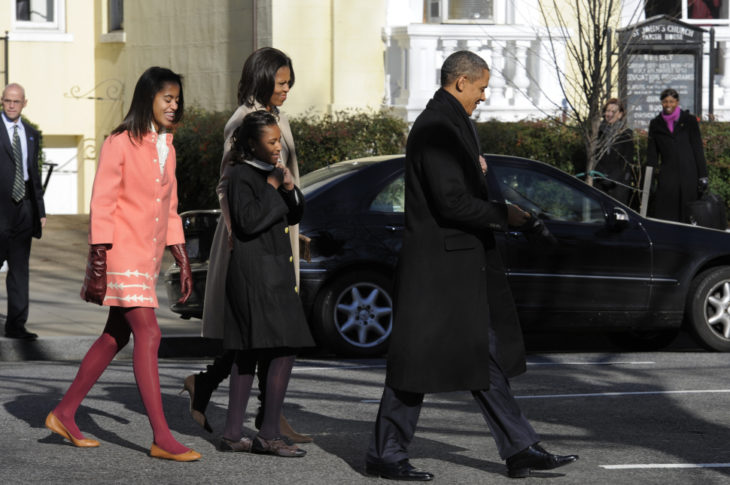 She really is a woman of the people!

16. Every Time They Took A Selfie 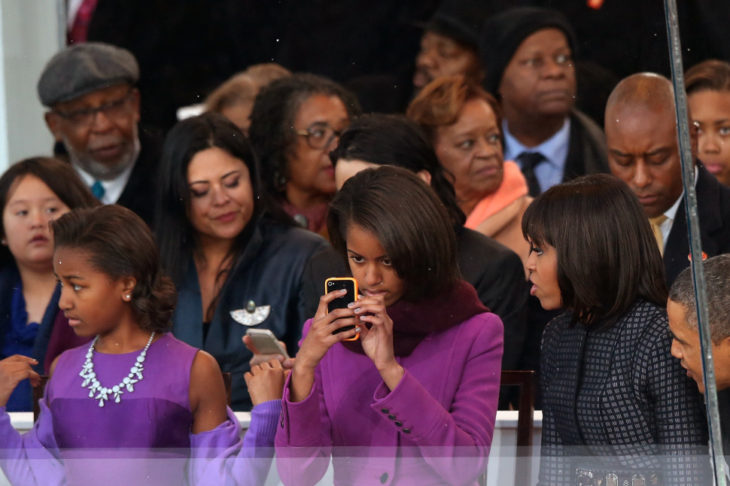 As the presidential inaugural parade winds through the nation’s capital January 21, 2013 in Washington, DC. Barack Obama was re-elected for a second term as President of the United States.