Sensory deprivation tanks are a tool for which modern floatation therapy treatment is conducted. This type of therapy is conducted on an individual level, with minimal to no guidance, and is known to produce improvements in mental and physical conditioning.

In this article, we will explain what exactly is a floatation tank, and document the research that has resulted in this form of treatment reaching worldwide mainstream popularity.

What is a sensory deprivation tank

A sensory deprivation tank is a large tank similar to a spa-bath. The tank is fully enclosed, light proof and soundproof, with the water inside being around 1 foot in depth, filled with extremely large amounts of Epsom salt, and heated to the exact temperature of your body. All these are key elements to producing the sensory deprivation aspect of the floatation therapy about which you can find out at Rest House Float Centre. According to PlatinumLED, the ability to float in complete darkness is an essential part of the experience, a large number of tanks designed in the past had no internal light system, instead you would leave the light on the room outside, enter the tank and then close the lid on the tank. Most modern tanks built in the last few years have internal lights, activated by a button, which allows you to obtain your perfect float position, and then turn the light off at your own leisure.

Soundproofing is another critical aspect of the tank, you want the inside of the tank to be completely free from external sounds, so that it is only you and the tank. Most tanks since the very start have been great at this, however, one downside of the older tanks is that in a commercial setting, at the end of each session somebody would have to enter the room and knock on the tank to let you know your session had ended. Modern tanks built in the last few years have eliminated this issue, by means of an internal waterproof sound system, which is able to play music underneath the water.

In a commercial setting this is often used to let you know your session has both begun and when your session is about to end, this is a big improvement as you are able to stay within the float room in complete privacy, as floating without clothes is recommended, many people often fear people entering at a time when they can be seen, the modern tanks with music as an alert system eliminate the need for staff to enter the room, giving you complete privacy before, during and after the session. 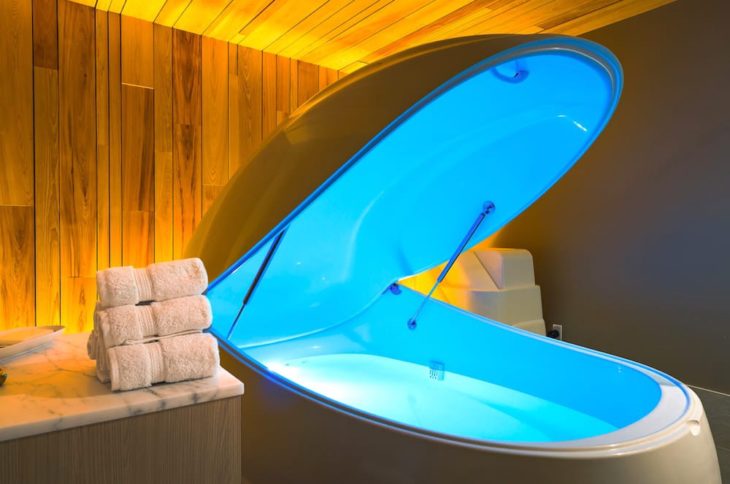 Without Epsom salt, the experience of total isolation would be extremely difficult. In the early days of sensory deprivation studies, salt was not used as a means of floatation, instead one would enter a very large and very deep tank, wearing a full face waterproof mask with an external air supply, they would then lay face down in the tank and curl their arms and legs in order to obtain floatation from the middle part of the body, users of these early tanks reported fear and anxiety during most sessions, as they were constantly haunted by a fear of drowning.

20 years later, the creator of the first tank, Dr. John C Lilly, came up with the idea of modifying the tank after it was found people with low amounts of body weight were unable to float using the previous method, hence came the introduction of a 10% sea salt solution to aid floatation in the prior method. After trying this 10% sea salt solution, Dr Lilly envisioned the possibility of total floatation, and increased the solution to 50% Epsom salt and 50% water, which created total buoyancy for anyone using the tank, removing the need to float face down, and hence removing the need for an external air supply.

The Epsom salt is also very gentle and beneficial for the skin, whereas a 50% sea salt solution would be too harsh for long sessions. This method is now the basis of all modern tanks, whereby the tank is an enclosed space instead of the enclosed face mask, and floatation is achieved through the natural buoyancy of the water, meaning one can float on their back without any effort.

The effects of the buoyant water system also eliminated the fear of drowning, along with allowing the water solution to be lowered from that of a small swimming pool to a tiny amount of around 500kg mixed with roughly the same amount of Epsom salts, creating a mixture of around 1000 litres in total, or around 1 foot depth when added to a modern sensory deprivation tank.

5. Water temperature set to 35.5 degrees Celsius, the average temperature of the skin and human body 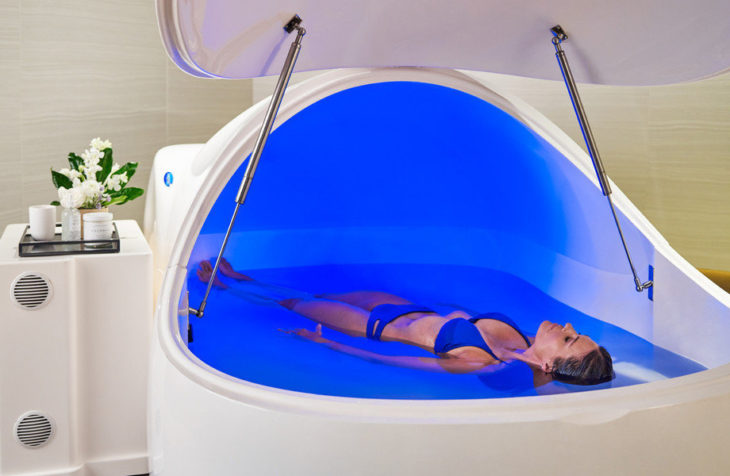 The research behind sensory deprivation therapy

Early studies between 1970 and 1980 mainly focused on the potential of sensory deprivation to cause awareness and diversion for individuals suffering from a range of stimulation seeking conditions, from obesity and drug addiction to compulsive gambling and sociopathy. The idea behind these early studies was the theory that these conditions are caused by the seeking of arousal of the senses, and hence if one was to experience a total lack of sensory arousal, the condition may improve or enter into remission.

Additionally, it was seen that individuals with addictions may be taking part in their drug use to cause a lowering in their requirements to seek arousal, hence self-medicating. The tank was shown to induce a state of optimal and comfortable arousal without the need for medication, and benefits and remissions were observed in alcoholics and other drug addicts, along with smokers and obese individuals. It is worth noting that during this time, Dr. Peter Suedfeld was a pioneer in the technique of floatation based sensory deprivation. 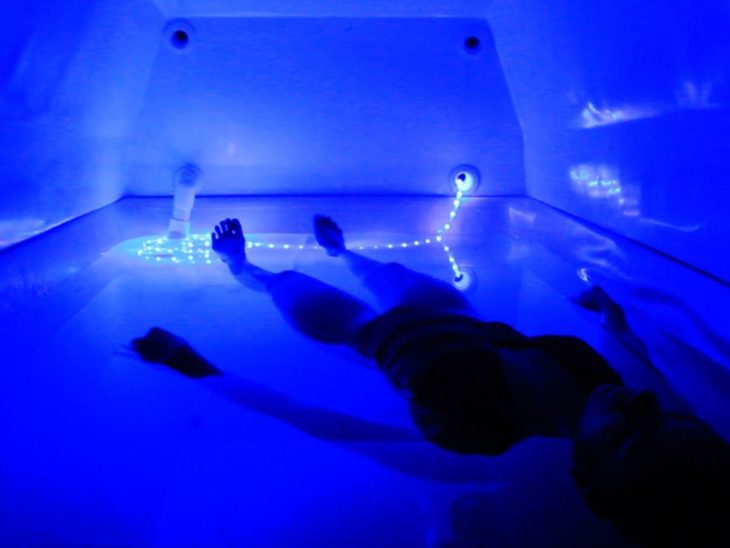 During the 1990s, the term floatation-REST was applied to studies conducted using a floatation tank, as opposed to standard REST which was now defined as sensory deprivation inside a dark and soundproof room, with the relaxation side of things induced by a bed rather than a floatation device. Floatation REST studies, however, became the preferred method and as studies in floatation-REST became more prominent, researches became more curious in their potential to improve human abilities in a variety of areas. One such well-known study using floatation-REST in 1993 used floatation-REST to test performance enhancement on rifle marksmanship, compared to those completing the same test and given only basic relaxation techniques beforehand. The floatation-REST participants were observed to obtain a significant increase in performance ability compared to subjects who simply took part in basic relaxation prior.

By the early 2000’s, floatation-REST studies were conducted on the ability for floatation tanks to induce repair in stress related muscle injury, along with burnout depression. The placebo group were given an alternate course of treatment known to have no benefit to the participant over the mental placebo effect. From these studies, participants who received floatation-REST were noted to have lower blood pressure, a reduction in pain, reduced anxiety, lower levels of depression, including stress and negative affectivity (the experience of negative emotions and poor self-concept). Additionally noted was a significant increase in optimism, energy and positive affectivity (feelings of cheerfulness, enthusiasm, and energy).

Floatation sessions are available in almost all major cities worldwide, along with many country and small towns. Regular sessions are timed at around 1 hour for beginners, and 2 hours for experienced floaters, some floaters prefer to take part in longer sessions which can often be arranged by negotiations with the float centre owners.

The experience itself is not clinical, instead it is more like visiting a day spa, and professional providers offer you complete privacy with a closed private room to partake in the therapy.

A regular session involves first fitting ear plugs to keep the salt out, showering, turning the light in the private room off, then entering the float tank which also has a light source, once inside the tank you close the top hatch and then find a suitable floating position, when you are comfortable you simply turn off the light in the tank, activated by a button on the side of the tank, and then relax.

Most people first become aware of any thought processes going on in their mind, and this first few minutes gives the ability to see what exactly the processes of the mind are doing, which you can then choose to stop thinking about, enjoying the tank in total peace from the mind. Depending on prior stress levels, this may take some time to get hold of your thoughts and calm them to a point where you wish to simply enjoy the tank, the silence and beauty of just being in the moment, without light or external noise, and without any things to do or worry about. 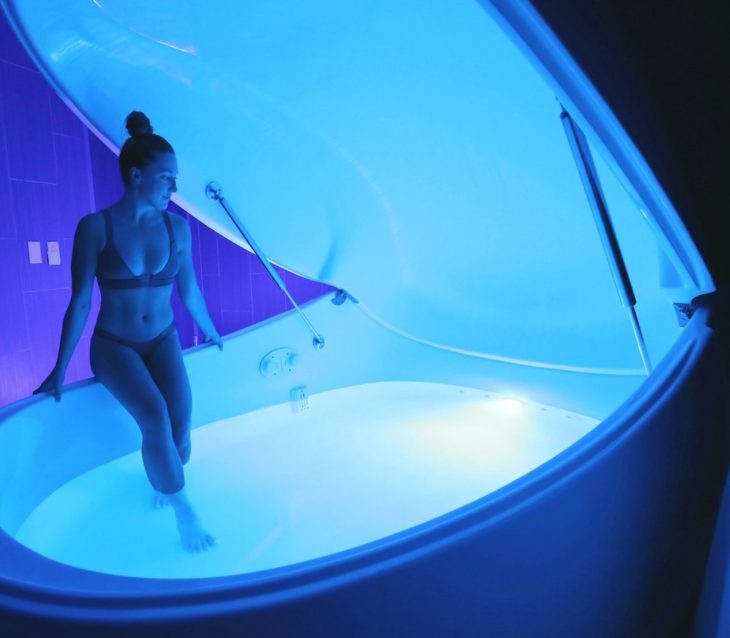 The best experience in the tank is when you are able to recognise your thoughts, calm them and just be in the moment, it is very commonly compared to what one images as floating in space, away from the world and away from everything, just relaxing and being able to enjoy doing absolutely nothing, others often report this period as if you were going on a date with yourself, you learn about yourself, learn to see past it, and just enjoy the moment and the experience of being yourself.

Depending on the type of provider you choose, the end of the session at the highest end providers is not done by someone entering the room, instead music is played within the tank, alerting you to the end of the session. You can then get out in total privacy, keeping in mind you want to float completely naked for the best effect, shower and remove your ear plugs.

The best float centres have a beautiful and relaxing lounge for you to enjoy a cup of herbal tea afterwards, and the after effects are often reported to be a ‘glow’ in terms of mind and body. The after effect is almost always one of total relaxation, even if you had trouble calming your mind during the time inside the tank, and this after effect has been known to last a month afterwards.

For the best experience, it is recommended to partake in at least 3 different sessions, each a couple of weeks apart, to experience the best benefits both in the short and long term. Psychologically the effects of the experience can potentially result in remission of certain issues, but when entering the tank and partaking, you should not have prior expectations of any benefits you may obtain.

The best way to go about your session is to expect nothing, just partake for the sake of trying a new experience, go about your session without thinking it will cure of heal anything, and then afterwards you will be able to see the full range of benefits you never before imagined could occur from such a short time, simply by stepping into a strange, dark warm water tank!

10 Most Popular Dances in the World

20 Ways To Feel More Confident About Your Relationship

Top 11 Reasons Why Swimming is Beneficial and...