True Story: I Didn’t Know I Was Pregnant (For 6 Months)

The moment that changed my life was actually pretty anticlimactic.

I took a pregnancy test. Waited the prescribed amount of time. Looked at the result. Threw the test away without really looking at it.

I knew I wasn’t pregnant. I had gotten the Mirena IUD over the summer –- the single most effective form of birth control outside of sterilization. I had packed on the pounds over the past few months, but as a newlywed who had just resumed eating like a sane person after a summer’s worth of dieting, that was to be expected, right?

It was a good 15 minutes or so later that something clicked in my head. I went back to the bathroom and fished the little white plastic pee-stick out of the trash. I stared at the little line across the window. I looked again at the back of the box. Back to the pee stick. Then the box.

It was positive. What? No. No way. There had to be a mistake.

In retrospect, I feel like an idiot. My belly was round and solid. I spent two weeks on a drastic no-sugar, no-starch cleanse diet and gained three pounds. I had terrible heartburn all the time.

But I wasn’t the sitcom-vision of a pregnant woman. I wasn’t hugging the toilet and loudly puking for hours on end. I had lost weight during the summer, thanks to a careful diet and exercise routine, with the intention of fitting in the size 6 gown I planned to wear at my September wedding. I wasn’t craving weird stuff –- at least, no more than usual.

Even when I finally went to the doctor, it was a gastrointestinal doc that I consulted, because I wanted to know why I was gaining weight. I was convinced that there was a medical explanation –- a thyroid issue, maybe.

Of course, when I complained about the weight gain, people suggested to me that I was pregnant, but I just rolled my eyes. As a young woman, I got that suspicion all the time. Turn down a drink? Put on a couple pounds? Feel kind of yucky one morning? “Are you pregnant?”

The GI doc manhandled my stomach for a few seconds and told me, as delicately as he could, that he felt “a lot of volume” in my uterus. He drew some blood but told me that I should take a pregnancy test, because based on my weight gain and symptoms, he suspected I was three months along. 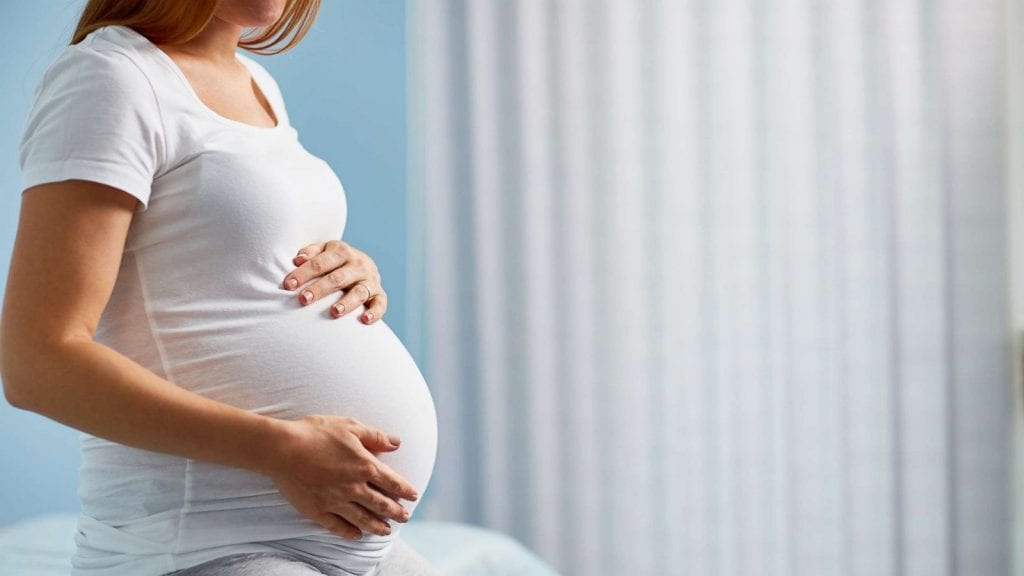 That appointment, and the subsequent pregnancy test, was on a Friday afternoon. I couldn’t get in to see an OB-GYN until that Monday, so I did what any modern woman would do: I took to the Internet to google “Mirena pregnancy.” There isn’t much information out there because it’s such a rare occurrence, but I was able to find just enough to terrify me: High risk of birth defects. Dangers to the mother and child. But if I removed the IUD, I read, it would most likely cause a miscarriage.

Over the course of that devastating weekend, my husband and I discussed the situation at length. I worried that I was a walking time bomb, and that the pregnancy, under the circumstances, was just too risky -– to me and the baby. I had been drinking, I had been exercising heavily –- we only had one car at the time, so I rode my bike to and from work, in the Arizona heat. It wasn’t the time.

I planned to have my doctor remove the IUD, and to let nature take its course.

That Monday, I trudged into my OB-GYN’s office. I was melancholy about the circumstances, but I mostly was ready for it to be over with.

As the nurse practitioner prepared me for an ultrasound, she asked if I was thinking about terminating the pregnancy. I told her I was, so she turned the ultrasound screen away from me, and began moving the wand over my stomach. She asked me about my health, about my marriage, about my habits.

Then she chirped, “Well, you’re about 24 weeks along, dear, so it’s too late to terminate,” as she swiveled the ultrasound screen toward me.

I let out some sort of squawk. I saw a baby hand on the screen. I gasped that I felt dizzy.

Then I passed out on the fucking table.

The rest of the visit is a blur. I do remember demanding to know if the baby was healthy –- six months meant six months of alcohol (including my bachelorette party, where I got thoroughly sloshed), six months of raw fish (including an entire ecosystem’s worth of raw oysters on my honeymoon), six months of regular running, six months of damn near everything the books tell you not to do when pregnant. She said that based on what she could tell, he was.

I took the canvas bag of baby goodies and wandered out of the office in a haze, frantically calling my husband. Over the phone, I stammered that “We’re having a fucking baby,” and “The little shit’s healthy as can be.” He left work and, somehow, beat me home, greeting me in our apartment complex with an ear-to-ear grin and tears of happiness streaming down his face.

I, on the other hand, was less than thrilled. It took me a long time to come to terms with the idea of having a baby. I was only 25. I had just started a job that I loved, on the other side of the country from my family, and had only just begun to build up a network of friends.

Announcing my pregnancy -– a moment that is so exciting for most women -– was a moment of sheepishness for me. I found myself in a position where I could tell my entire circle, including my all-male co-workers, that I had only just found out and be embarrassed that it took me so long. Or, I could let them think I had known all along and had knowingly put my baby at risk. It was a newsroom, so we frequently went out for beers after work, and at least one co-worker had seen me more than a little tipsy.

I chose the latter route. I was mortified and almost welcomed when nosy co-workers asked how I possibly couldn’t have known, because it meant I had a chance to explain myself. I never had morning sickness, I protested. I was on birth control that messed with my cycle. I lost rather than gained weight in my first trimester. The excuses were endless, but stacked together, drew up a big picture of denial.

Any misery I “skipped” in the first two trimesters, I more than made up for in the last. My weight shot up, shredding my stomach and hips with purple stretch marks. My energy, suddenly drained, and I began to get cabin fever in my own body. Worst of all, at least physically, was the rib pain. I was carrying my son up very high, and my uterus was actually rubbing away at my ribs’ lining. 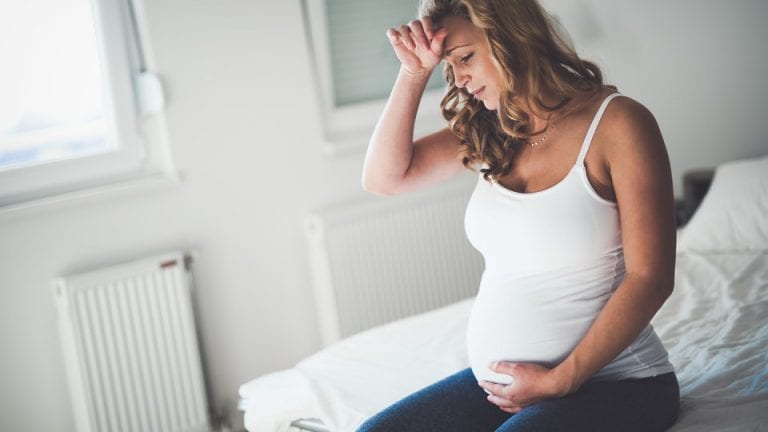 But the worst was my emotional state. I was terrified and furious to be put in this impossible situation. It wasn’t fair, I thought. I did everything right. They even did a pregnancy test before I got the IUD, which came back negative. Turns out it was too early in the pregnancy to show up.

I cried a lot during those three months that seemed, at the same time, excruciatingly long but so short I couldn’t catch my breath. I felt a crushing guilt that I wasn’t happy. I would go to pregnancy message boards and read books about pregnancy, and it seemed like every other mom in the world was overjoyed to have a child on the way. Constantly, I felt like there was something wrong with me. Was I broken? Was I missing some sort of “mothering instinct” that other women had?

My son was born on March 9, 2012, in perfect health. He is now a toddler, his development consistently ahead of the curve and every bit as stubborn, headstrong, and mischievous as he was in the womb. He grins and runs into my arms at the end of the day. He loves to play hide and seek. His favorite toys are Hot Wheels cars, which he runs along the coffee table while going “Brrrroooommmmm.” I love him so much that sometimes I feel like my heart can’t hold it all in.

My world has changed completely. Instead of an independent life in Arizona, spending my days working long hours and hitting the gym every day, getting my nails done every other week and hiking in the mountains with the dogs on the weekends, I now live two streets from the house where I grew up, work a steady 9-5 in marketing, and spend my weekends at children’s museums. I’m lucky to squeeze in a 3-miler after work, no joke when pushing a stroller. I can name all the characters on “Yo Gabba Gabba.” I make weekly trips to Babies R Us.

I love my life. I am happy. My son is an amazing little creature and I take great joy in watching him grow a little more and learn a little more every day.

But every once and awhile, even after more than a year, I look at his fuzzy little head, bowed over some toy or puzzle, and it hits me. “Holy shit,” I think, “there is a small human being that depends on us for his survival! How the hell did that happen?”

5 Dating Tips For Plus Size Women

Girl Talk: Why I Don’t Diet