True Story: I Was A Reddit Gone Wild Girl

Here’s something I kept private for a good long time: I was, once upon a time, jane_doe_eyed and RexyRockit on Reddit, and specifically on Reddit’s GoneWild subforum. Ta-da! Hello. You can see a lot of my skin on the Internet. Someone reading this might have pictures of me cached on their hard drive. Nice to meet you.

I put up my first GW post as jane_doe_eyed (I know it’s corny, but I was going for something kind of sexy while expressing my desire for anonymity) after leaving a relationship in which my sexuality had been shamed and repressed for years. In high school, I was my school’s QSA president and I was way, way into activism having to do with gender and open sexuality, so I was very aware of myself and very aware and respectful of all sexual orientations and alternative sexualities. I was never the kind of person who thought it was inappropriate or weird or blush-worthy to talk about sex in a frank way. My partner thought otherwise and made me feel bad about myself for it, so when I got the opportunity to bound out of that relationship and do my own thing, I freed my sexual identity and my ta-tas in one fell swoop.

Well, OK, the first post had no ta-tas. I had been expecting to go on a date with someone with whom I’d hooked up previously and he got lame and canceled, so I was like, “Cool, I bought new undies, someone’s gonna see them.” My post as jane_doe_eyed, mild though it was, made it to top post in a forum that is filled with fully-nude boobs and buttholes, which was pretty cool.

Some very frustrated people look at GW girls and say that we all have low self-esteem, that we’re desperate for attention, that we’re pathetic whores. Obviously, I disagree: I have high self-esteem and I don’t mind showing off. Believe me, I am not wanting for attention. And what’s pathetic, to me, is slurring women for being comfortable in their bodies and with their sexualities. I can’t abide people who are so attached to stuffing women into the ill-fitting categories of either Madonna or Whore that they refuse to see women as complex, nuanced, whole human beings.

Here’s my thing: What anyone ever saw of my body was skin. I’m not sure why the skin that’s eight inches lower than my shoulder is any more scandalous or damning than the skin on my face. I’m not sure why the skin on the back of my knee is more moral than the skin on the back of my hips. Boobs and butts are muscle and fat covered in a dermis, and there are so many people in the world who have boobs and butts, so it’s not extraordinary to look at them or have them or admit that they exist. I’m honestly not even convinced that we’re all that attracted to boobs and butts (and legs and vaginas and penises) per se; I’m more of the opinion that bodies are great but the way they’re presented is more important, which may or may not be why a non-nude post got voted up to the top of the forum. To wit, you can also see my butt here, but that’s by no means a sexual context for it, so I’m not sure most people would consider the photo sexy.

And quick aside: I’m sure some people will see this and think, if this person is willing to put pictures of herself in her skivvies or less up on the internet, isn’t she inviting harassment outside of the internet? The great thing about GW is that it’s a place where you specifically and voluntarily invite commentary or compliments, where that is expected from the get-go. In the context of GW, that’s appropriate. If someone saw my GW pictures, recognized me on the street, and tried to make a pass at me, I would be skeeved out, because we would no longer be in that context. We’d be in a street context, and I’d expect the same respect anyone would pay to Random Dude Walking Down the Block. When you post on GoneWild, you consent to commentary on a moderated forum, which is a very specific environment.

GoneWild was a fantastic community for me while I was solidifying myself as an independent and sexual adult person, and while I was expressing my total devil-may-care attitude toward bodies and our culture’s expectations of them. I loved the moderators (they are truly fantastic), and the vast majority of the commenters and other posters were supportive, kind, enthusiastic people. I never felt hurt or unsafe by anything that anyone said on GW. When I stopped posting, I stopped posting because it had been good fun, but I found a different outlet for my sexuality in my relationship with my sexay sexay boyfriend. Which, of course, isn’t to say that I wouldn’t do it again — if I felt the whim. 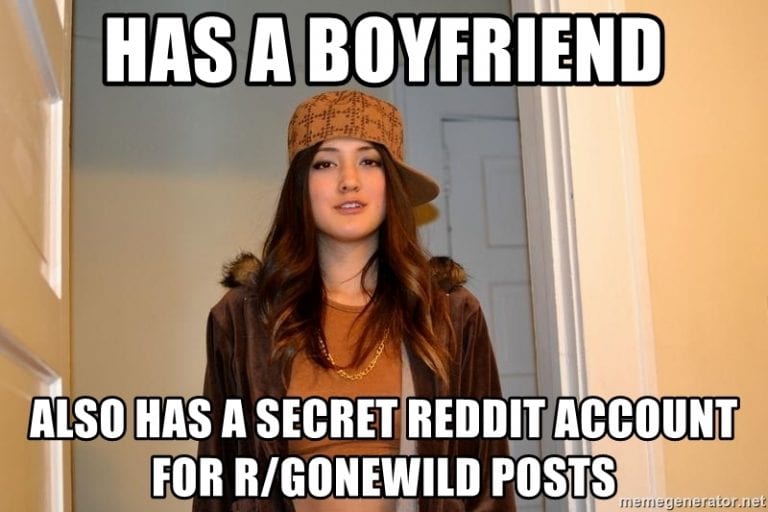 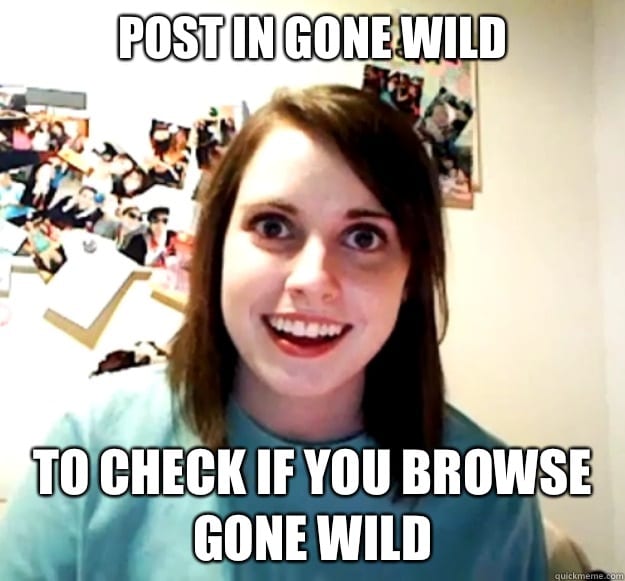 Rebecca Vipond Brink is a writer, photographer, and traveler.  You can follow her at @rebeccavbrink or on her blog, Flare and Fade.