Movies You Can Bet On

Everybody loves a good gangster movie and most of the wise guy flicks invariably involve at least an element of gambling-. Goodfellas, The Godfather, and Donnie Brasco are at, or near the top, of everyone’s list but nobody would consider them gambling movies per se.

What we are focusing on, for the purposes of this article are cinematic classics where gambling is the main theme, with gangsters and wise guys relegated to ancillary pieces woven into the fabric of the movie. Many of the actors of these standout motion pictures are household names and in the more recent gambling films, we have learned some of the actors learned how to bet, speak the lingo, and get a feel for both the recreational and professional gambler.

In Uncut Gems, the 2019 crime thriller starring Adam Sandler, as Howard Ratner, a Jewish-American jeweler and gambling degenerate in New York City’s Diamond District, Sandler needed to learn how to talk the talk and understand what it all meant. Terms like over/under, parlays, round-robins, and birdcages had to flow naturally, and based on the reviews, he proved to be a quick learner.

Information provided by: sportsbookreview.com
Below we discuss two legendary gambling movies and one that is wildly unheralded in the genre. Without further ado…let’s go! 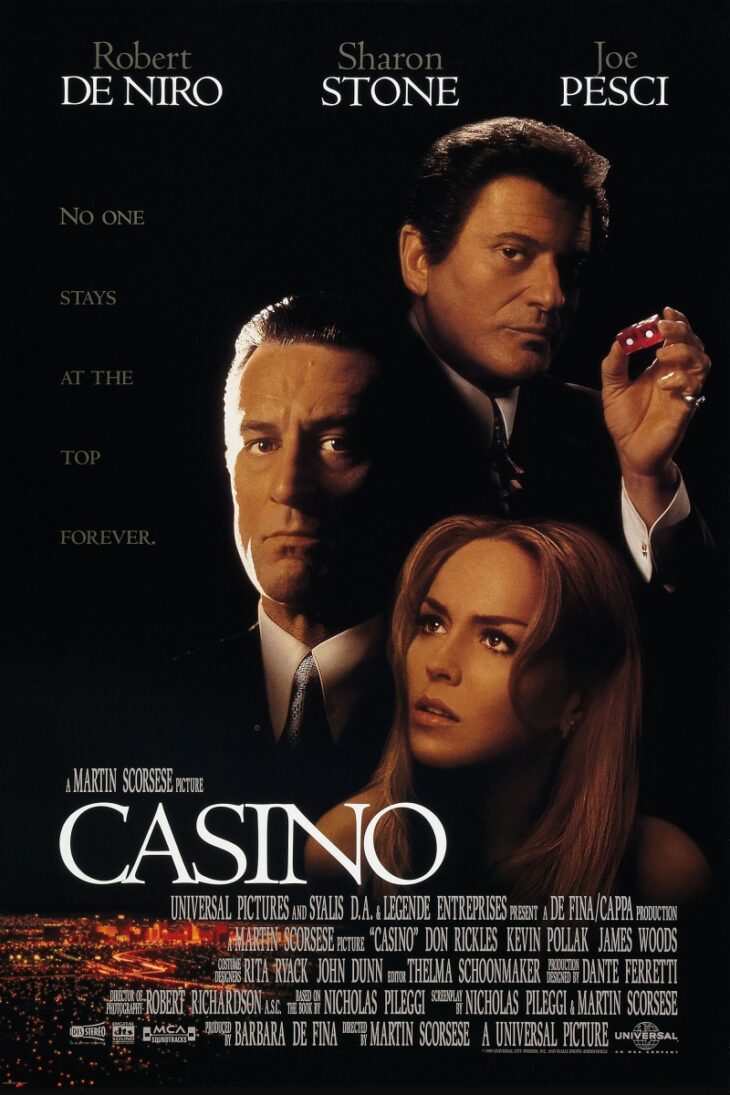 Casino is one of the greatest gambling movies ever, starring Robert DeNiro, Joe Pesci, and Sharon Stone. The star-studded cast led by legendary director, Martin Scorsese, has a scintillating script and the fact that it is loosely based on a true story gives it even more street cred.

The movie is loosely based on the life of Frank “Lefty” Rosenthal, a sports handicapper turned Vegas sportsbook manager. Robert DeNiro plays Sam “Ace” Rothstein (Rosenthal) who runs the Tangiers Casino (based on the Stardust) for the Chicago syndicate. Joe Pesci gives an unforgettable performance as Nicky Santoro (Anthony “The Ant” Spilotro), Rothstein’s best friend, and a made-man of the Chicago mob. Santoro’s incandescent temper is legendary and earns him the respect of his peers but ultimately proves to be his undoing.

This one is a must-see for those who love the mystique and opulence of Sin City circa 1973. Casino definitely ranks as a gangster film but because the setting is the Tangiers Casino and the movie highlights the inner workings of the gambling industry, replete with the appropriate vernacular and gritty characters aplenty, it also doubles as a gambling movie. If you haven’t seen Casino, set aside three hours of your life and enjoy. You can bet on it. 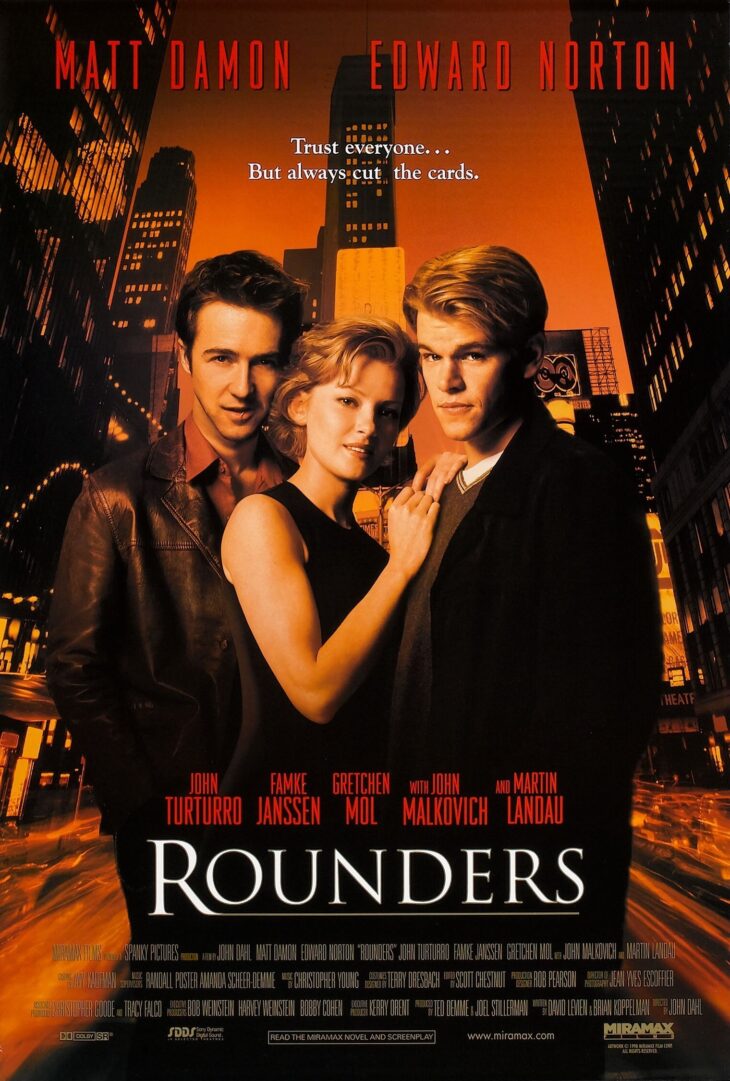 Rounders is the reason Texas Hold’em soared to unforeseen heights and spawned the online poker craze. Matt Damon is the scholarly Mike McDermott, a law school student by day but a poker savant by night. Damon is perfectly cast as the protagonist with a toothy grin and an aw-shucks demeanor. But McDermott can’t shake the gambling bug and winds up dropping 30 G’s to local Russian mobster, Teddy KGB, played immaculately by the incomparable John Malkovich. McDermott relies on his preternatural poker skills to concoct a strategy to get his 30-grand back, pay off the loan sharks for his buddies, and have enough high society left over to make his dream come true and buy a seat at the World Series of Poker.

Damon and Malkovich are joined on set by fellow A-list actors John Turturro and Ed Norton who play Joey Knish and Lester “Worm” Murphy, respectively. It’s an embarrassment of thespian talent on the silver stage and the story is seamlessly woven by director, John Dahl. “Pay that man his money” is a line you will never forget once you watch this cinematic classic. 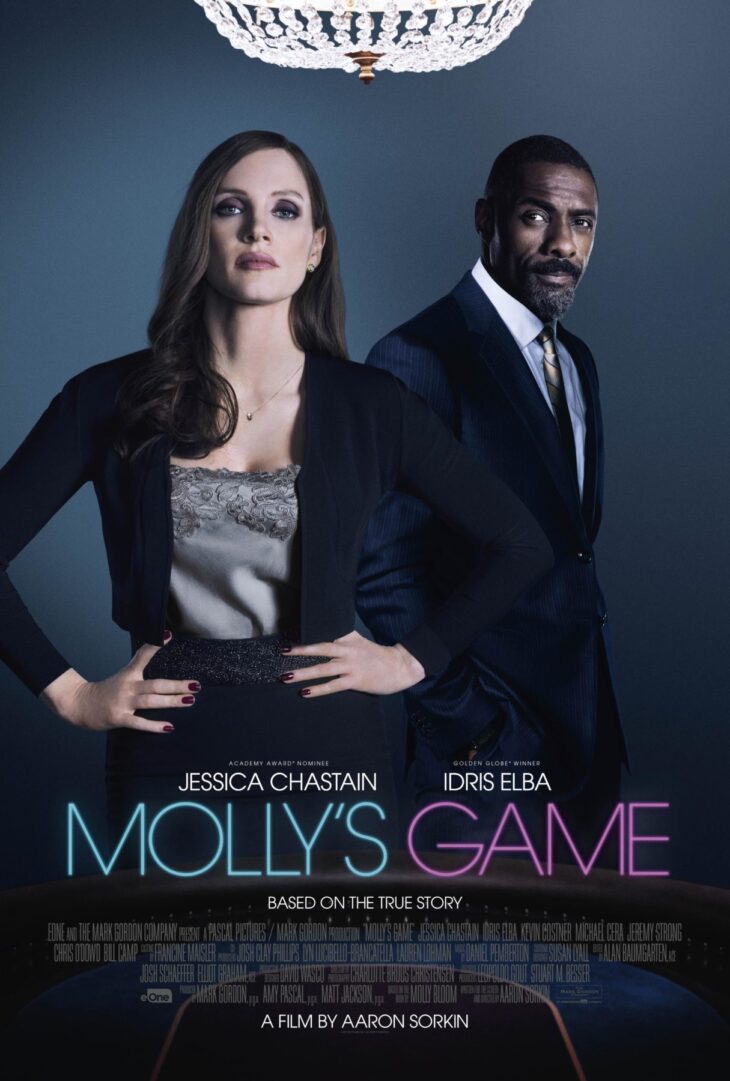 Guess which of these three is the unheralded movie? Yes, it’s Molly’s Game and if you haven’t seen it, change that. Molly’s Game is another movie loosely based on a true story but it doesn’t have the megawatt star power of the two previously discussed. Nevertheless, Jessica Chastain is superb in the titular role and veteran actor Kevin Costner provides the steady, smooth, calm of Molly’s estranged father.

Molly Bloom was an elite mogul skier with lofty aspirations that were dashed in a devastating ski accident as she was attempting to qualify for the 2002 Winter Olympics. Instead of attending law school, as she originally planned, Molly decides to hang out in Los Angeles while she gets her head together and constructs a road map for the rest of her life. It’s not long before she finds a job at an LA club and becomes enmeshed in the local nightlife.

Connections in the club scene lead her to host underground poker games with high profile celebrities, international jet setters, and rich men of questionable pedigree. Molly picks up a nasty drug habit but her street smarts combined with a shrewd mental acuity are the tools she uses to weave in and out of trouble with Italian and Russian mobsters, not to mention the federal government. It’s a movie well worth watching and once you do, you will know that Molly’s Game ranks right there with the best of them.

Pros And Cons Of Living Abroad While Raising A Family

What Does a Mascot Mean to a Company?

6 Things to Know if You Are Planning...