Once upon a time I met a guy at a bar I totally clicked with. He was sexy, smart, ambitious, well-dressed, and single. In fact, we were both just a few months out of relationships and looking to date around. The big difference between us, though, was that he had remained close with his ex, and I, while having broken up with mine amicably, didn’t feel the need to keep him in my life past the occasional email or phone call. Now, this guy we’ll call Matt tried to explain to me it wasn’t a big deal that he was friends with his ex, and for a while I believed him. They were both finishing up med school at the same place, after all, and had some classes together and a lot of mutual friends. But as time went on and he and I became exclusive, it became more and more obvious to me that we weren’t actually the only two people in our relationship. His ex, however “harmless” he said she was, seemed to always be lingering right on the edge of, if not actually wedged right between, us.

I was determined to be the “cool girlfriend,” though, who didn’t get all crazy jealous over my boyfriend’s ex, but it became increasingly difficult to ignore what was happening. My boyfriend was spending time with her and lying about it to me, having heated fights with her on the phone in front of me, and once, when I opened his laptop to check my email, there was a ton of photos of her on the screen. The writing wasn’t just on the wall; it was blinking in neon lights. And still I stayed with the guy. Why? Because I was deep in denial. I didn’t want to be alone. I thought I could change him — win him over. All of the above. When you don’t want something to be true, it’s easy to convince yourself it isn’t. 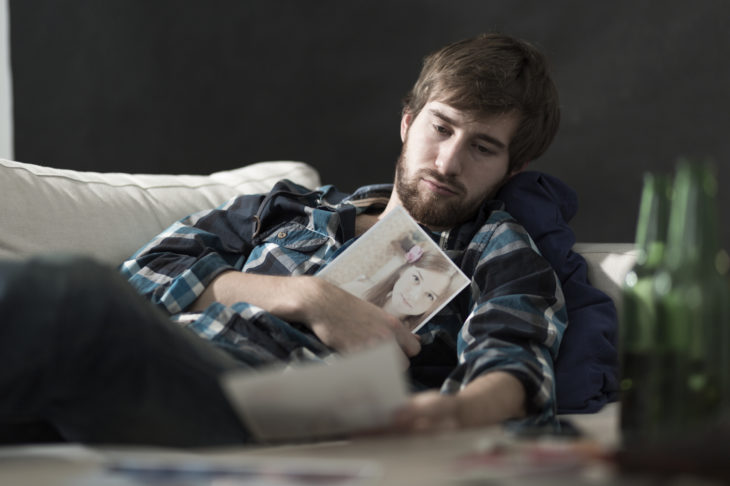 He was the one who finally ended things. He swore it wasn’t because he was still in love with his ex and that I was crazy to think so. He said he just didn’t think we were right for each other. He’d been accepted into a residency at a hospital in another city and didn’t see us doing the long-distance thing. It was a reasonable excuse, but I knew he wasn’t telling the whole truth. Still, after the initial hurt of being dumped, I felt a big sense of relief and saw things so much more clearly through the lens of retrospection. I deserved to be with someone who was emotionally available and really wanted to be with me. And I told myself I’d never doubt my gut — or obvious signals — that a guy wasn’t over an ex.

It’s one of the most common questions I get for my Dear Wendy column — the whole “Is he over his ex?” issue—and my answer will always be the same: if your instinct says he isn’t, listen to it. I understand — believe me, I understand — the temptation to push that instinct aside and ignore it. I know what it feels like to just want to be with someone so much — to want it to work out — that you’re willing to overlook major red flags. But in the end, you’re hurting yourself, and denial is the worst friend you could find.

Things worked out for the best, of course. A little over a year after Matt and I broke up, I met my now-husband, Drew. I did a lot of soul-searching in that year and examined some of the dating mistakes I made and promised myself I’d be smarter in the future. I think when I met Drew, I was finally actually ready for someone like him — someone who genuinely liked me and wanted a true grown-up relationship with no games. It felt pretty right from the beginning — other than that long-distance hurdle — and I never had any doubts about his intentions or commitment to me. From the start, he made it known he wanted to be with me and only me. And I’m not saying every relationship should necessarily start that way, but for me it was just the confirmation I needed that I was on the right path and this one was special.

One evening a couple years ago, I was bored and probably a little tipsy and ended up Googling Matt just to see what ever happened to him. And you know what I found? A wedding registry … for him and that ex he said he said I was so crazy to believe he was still in love with. So, trust your gut, I say. When you’re lost in lust or love, it’s the best compass you can rely on.