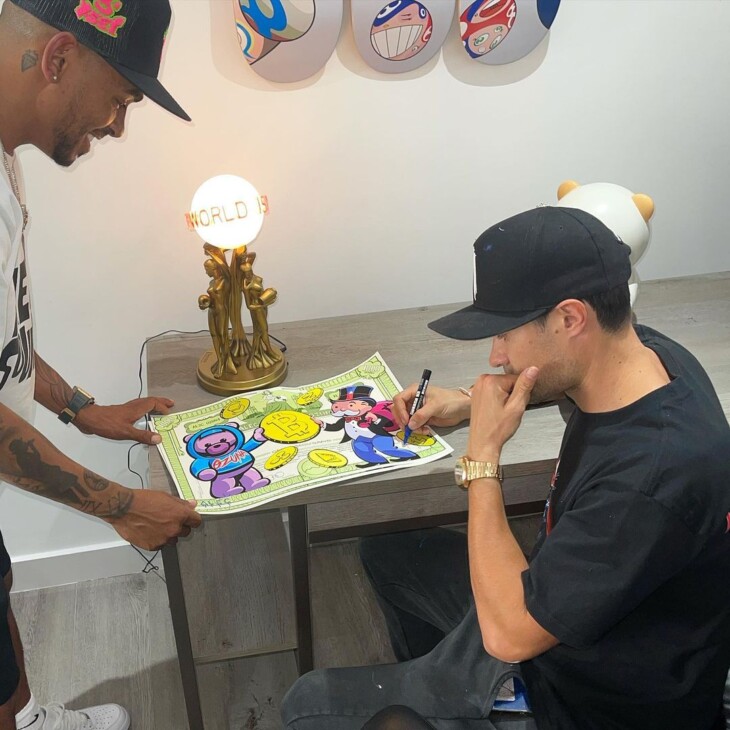 Alec Monopolyis certainly one of the greatest interpreters of contemporary art and street art of the moment. His works – canvas, toys, sculptures, Hermes Birkin that are used as canvases – are the object of desire of every collector and are housed in major art galleries around the world.

If you happen to see a masked man in a bandana and hat with cans in his hand, don’t be afraid. Rather. Come closer because the bad thing is painting something Monopoly themed.

He is called Alec Monopoly and is one of the golden kids of contemporary street art. His works, signed ALEC, are among the most requested in the world, even by brands. Recently he was also hired by Tag Heuer as an “art provocateur”, a sort of art director of a truly artistic nature, called to customize some models. And not only. 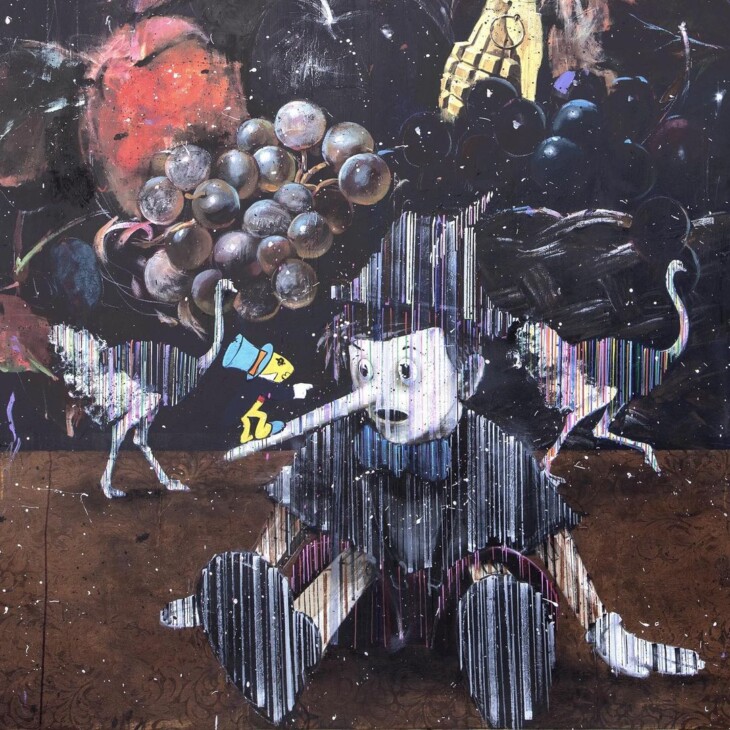 Angelo Accardi was born in 1964 in Sapri, Salerno. After a brief experience at the Academy of Fine Arts in Naples, in the early nineties he opened his own studio in his native town. His artistic research is mainly interested in figuration with a social background made with an evident and nervous pictorial gesture.

This crisis accompanied him for some years until, in the early nineties, he opened his personal studio in Sapri. Here he begins to create works centered on the study of man with a social background.

Thus was born the Human Collection cycle of works that consecrates him to the figure of Accardi as an artist.

This collection therefore marks an important step in Accardi’s artistic career: the artist, in fact, gives way to a production with deep tones that he will develop over the years, coming to create the works that today make him one of the most famous and quoted artists of the ‘contemporary art.

It is in this period that the innumerable personal exhibitions dedicated to Angelo Accardi painter began in important galleries, both Italian and foreign.

From this moment on, the artist’s fame is constantly growing. Suffice it to say that for about a year, in fact, the prices of his works have doubled, confirming the position of importance that Accardi occupies in the contemporary art market.

Angelo Accardi still lives and works in Sapri, his country of origin. 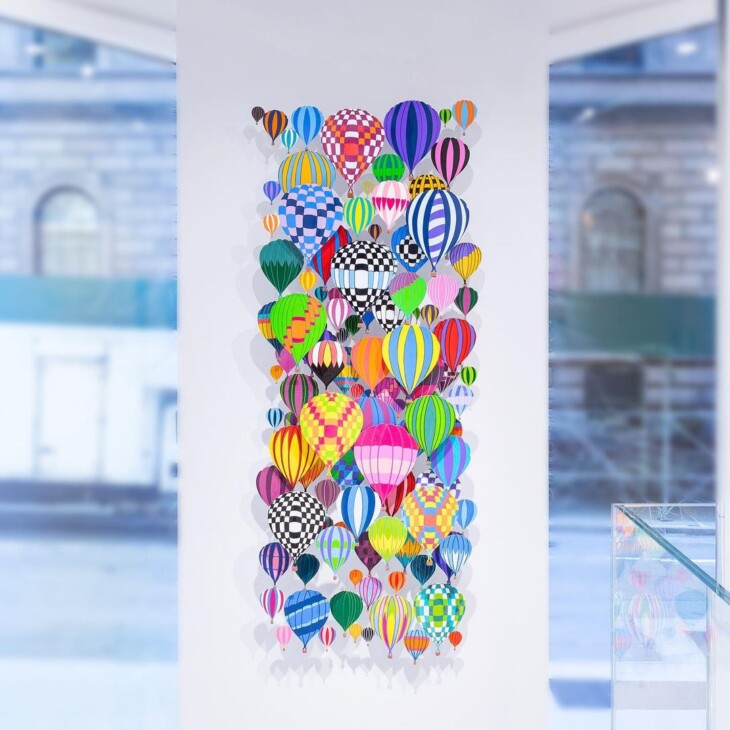 Eclectic and versatile artist David Kracov was born in 1968 in Boston. At the age of 12, after winning first place in an art competition, he became one of the youngest artists ever to have exhibited his works in an exhibition at the Boston Museum of Fine Arts.

He completed his studies at the Rhode Island School of Design and moved to Los Angeles and there he began his career in the world of animation.

His sculpture was born from the characters he animated: Kracov thus represents the iconic Looney Tunes in clay, obtaining great success that will lead him to continue this career. From clay he moves on to works in metal and steel, materials that are then finished with careful and lively colors.

His sculptures will thus achieve enormous success, so much so that they become part of the collections of various Hollywood stars, including Steven Spielberg, Kirk Douglas, Matt Damon, Whoopi Goldberg and many others.

We particularly remember the artist’s collaboration with the Douglas family, for which he created the iconic The Book of Life in honor of Kirk Douglas, personally delivered to him by his son Michael.

References to pop culture, quotes from other artists and tributes to great masters of art remain a constant throughout David Kracov’s artistic career, giving life to the explosion of colors and positivity that characterizes his works.

Dorit Levinstein was born in 1956 and graduated in graphic design from the Technion School of Technology. She continues her studies in painting and sculpture at the Anvi Institute of Art and Design in Tel Aviv, where from 1985 to 1988 she teaches art there.

Since 1989 you have been experimenting with new artistic approaches in a perfect combination of sculpture and painting, creating works in painted wood and aluminum.

After this first phase, Levinstein continues to explore different materials and techniques until his very personal painted bronze sculptures take shape for which the artist is now famous throughout the world. 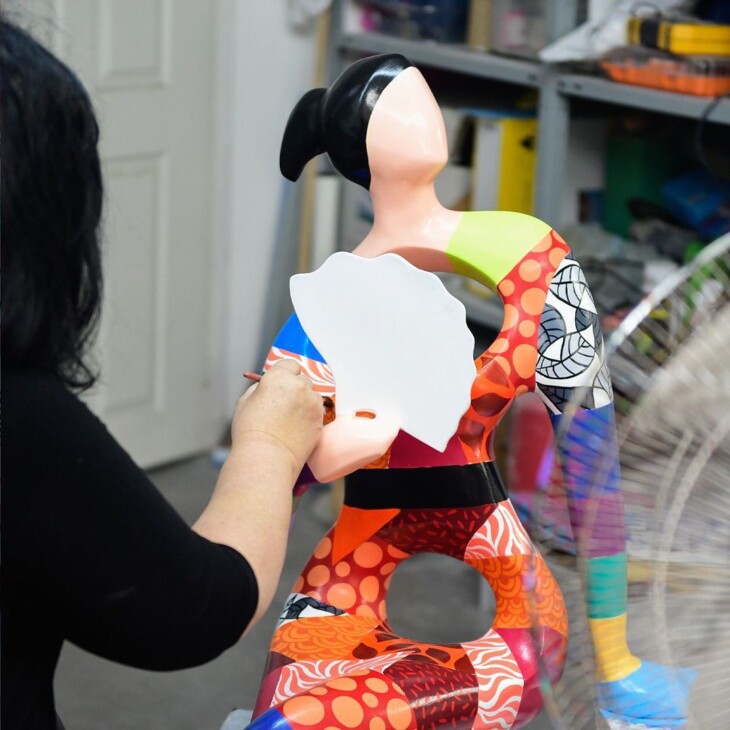 Dorit Levinstein’s works can now be found in numerous private collections and exhibited in galleries in cities around the world, including New York, Lyon, San Francisco, Jerusalem, Tel Aviv, Singapore, Berlin, Hamburg, Istanbul, Paris and many more. On commission you have produced both indoor and outdoor works for municipalities and prestigious hotels.

The works represent the dialogue between painting and sculpture, flatness and space, movement and stability.

The rhythm with the changing stripes and motifs segments the flow and the continuity of the linear structure while the figures: linear, sinuous and harmonics spin as if they were dancing on a repeating melody.

Harmonious figures expand into space in an explosion of colors and decorative motifs. Human, floral and animal subjects to represent the world (through shapes and colors) and consequently the essence of life itself through the use of cheerful bright colors.

The light slips away caressing the figures, playing on the harmonious lines to the rhythm of the colors. These bronze sculptures make you smile and cheer up, putting the interlocutor at ease and suggesting a return to a childish, simple self, full of exuberance and positivity. 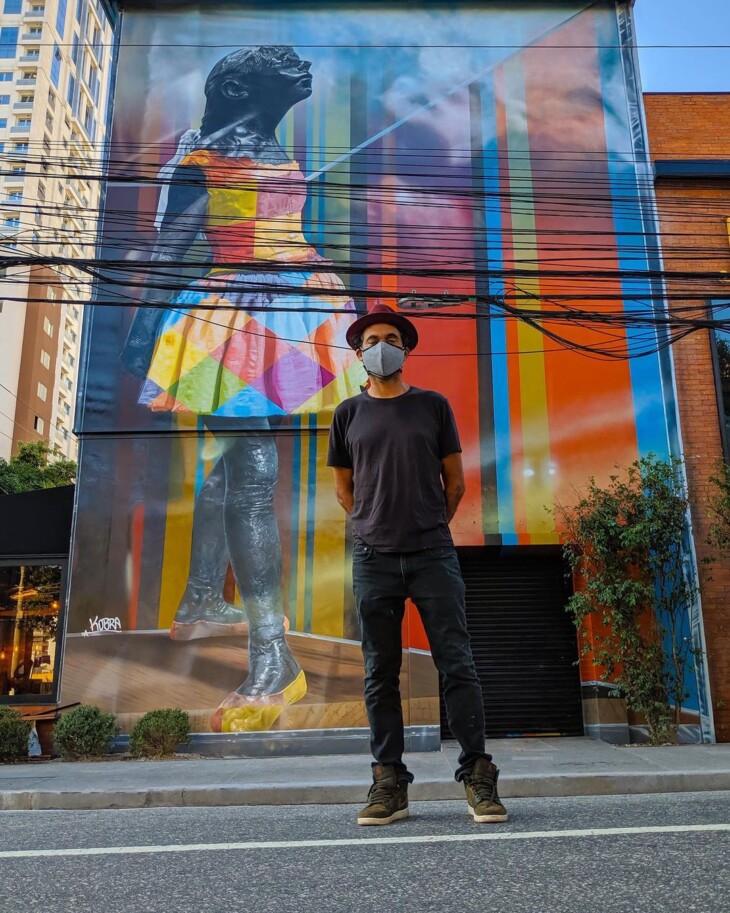 Standard bearer of the neo-avant-garde of Sao Paolo, Edoardo Kobra is a giant of murals. Combinations of different techniques such as painting with brushes, airbrushing and sprays, make his works majestic and out of any scheme.

His talent emerged in the maze of the city in 1987 and since then he has never stopped: streets, walls, entire facades, everything is useful for Kobra’s purpose. His painting stands out for its chromatic stroke and for its sometimes exaggerated dimensions.

Package Disappeared: What to Do Now?

Ana Skoumal on How Artists and Creators Can...

Enduring Legacy of Banksy: His Impact on Street...