Ask A Married Guy: “My Boyfriend Is Suddenly Being Weird About Moving In Together”

I’m confused about whether or not I should move in with my boyfriend of about a year.  We are both in our twenties. For the past year, I’ve been living with roommates. During that time, he would frequently invite me over to his place, a house with a big yard, and then invite me to stay the night.  He would do this almost every night and feel very happy about it, even proudly joking he had successfully “stolen” me from my roommates once again. He always talked about me moving in. Even when I tried to find other roommates, he would always insist I just move in with him.

But when my roommates moved out a month before the lease expired, his story changed.  Now that it’s just me, he never “steals” me, and if I go to his place he is sure to bring me back to my place so we can sleep separately. Now he says he’d prefer for us both to have our own separate places.  I can’t afford to live on my own in this city without roommates, plus I very much prefer to live with other people. Living alone feels unnatural, uncomfortable and unsafe to me.

My lease expires soon, and I wasn’t searching for other roommates very seriously as I was spending most of my time with him, and up until a few weeks ago, he was insisting I live with him. Why did he only want me when I was living with other people?  What is going on in his head?  I feel trapped. – S. 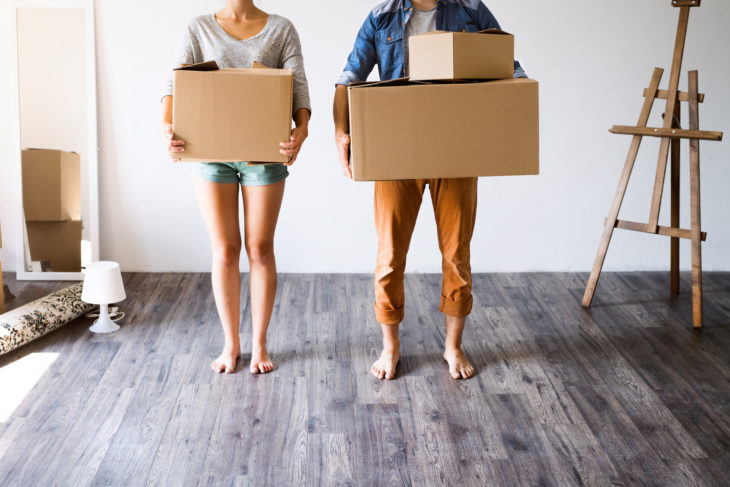 When you had a stable roommate situation, your BF was free to act like the stud. He could tell you how hot you made him, and how great it would be if you moved in. Boys aren’t dumb: we know nothing gets a lady’s motor running more than a “nest request.” What was the cost of this behavior to him, in the moment? Zero. Nada. Zilch. In fact, he was rewarded. More often than not, you stayed, you put out, and everyone was happy. As for the “stealing you from the roommates” shtick, he may even have believed that in the moment. It probably fed into a caveman part of his brain: “Rawr! I took lady from other tribe! I made her MY lady! Let me shake this giant rock and eat this giant turkey leg!” etc, etc.

But when the time came to actually sacrifice his conveniences and comforts? “Whoa, whoa, whoa … let’s slow this down.” I’ve said it before, and I’ll say it again. Men communicate behaviorally. We DO what we mean, but we often won’t say it. Real talk? We lie. Most of the time, that’s a cowardly, crappy impulse which we should grow out of. Occasionally, there are good reasons for lying. We like to avoid conflict, which women can sometimes turn into a giant waste of time, involving public crying, sulking, and/or other manipulative shit. And please don’t yell indignantly at your screen, because you’ve done it before and you’ll do it again and that’s fine. It’s how the game is played. Men also have fewer actual preferences than women. So sometimes, we say we care about stuff when we don’t. I would say men genuinely don’t give a shit about 90% of stuff in the world. Women are the opposite. They give a shit about at least 90% of stuff. We don’t care, but we pretend to, because it’s easier than being asked why we don’t care, and why don’t we have any feelings, and why are you so cold… and… and … It’s exhausting.

But what your boyfriend did? This was not the acceptable kind of male lying. He was genuinely manipulating you, in a very uncool way. He was getting your hopes up for a thing he clearly had no intention of giving you. And this wasn’t small stuff. It was something big: the roof over your head. This is deeply crappy behavior. This wasn’t a lie to make his life easier. This was a lie in service of his power trip. Not acceptable. You didn’t ask me what to do, you asked me what was going on in his head. And I think I delivered that. But if you asked me for advice on next steps? I’d tell you to break up with him. He violated your sense of safety and security. He should beg to get that back, and you should only oblige if says (and more importantly acts) like he got the message.

Feminist Dads Pretend To Breastfeed For An Awesome New Campaign